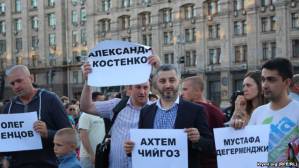 A protest in Kyiv demanding the release of Ukrainian nationals from Crimea held in detention, including Crimean Tatar leader Akhtem Chiygoz, Oleg Sentsov, Oleksandr Kolchenko and, unfortunately, many others

The invaluable and unique role played by the Crimean Human Rights Field Mission in documenting rights abuses since Russia’s invasion and occupation of Crimea recently earned it a place of Russia’s list of ‘undesirable’ organizations.  Since Mission members, as well as those who help them, now face criminal prosecution in Russian-occupied Crimea, and Ukraine is, bafflingly, also obstructive, the Crimean Field Mission [CFMHR] has announced a ‘reformatting’ of its work and the emergence of new human rights initiatives.

As reported, on July 7 Russia’s upper house of parliament, the Federation Council announced that it had drawn up a ‘patriotic stop list’ of foreign NGOs deemed ‘undesirable’ in Russia.  The 12 organizations named including CFMHR. Just prior to this, Konstantin Kosachev from the FC committee on international affairs had claimed that the organizations were “known for their anti-Russian bias” and that Russia’s parliamentarians “want to defend Russian civic society from outside manipulation”.

In a statement issued on Sept 10, CFMHR explains that “inclusion in this list of undesirable organizations places both members of the Field Mission and those who work with them in danger of criminal prosecution”.

Regrettably, this has not been the only problem they have encountered. On June 4, 2015, Ukraine’s Cabinet of Ministers adopted Resolution No. 367 on regulating entry and exit from Crimea.  This provides an exhaustive list of grounds by which foreign nationals can be issued with special permission for entering Crimea.  The list does not include human rights workers, lawyers or journalists which significantly restricts the work of all such groups if they are not Ukrainian nationals. (More details: Ukraine must not help Russia hide its rights violations in Crimea)

CFMHR affirms that “despite these threats and challenges, the Crimean Field Mission is continuing its work in drawing attention to rights violations in Crimea, stressing the importance of following international standards in this sphere and the inadmissibility of obstructing the work of human rights activists and journalists in gathering information about rights violations in Crimea”.

Having been the only human rights initiative present in Crimea which documented and monitored rights violations, CFMHR is “now pleased to welcome new human rights structures working to defend human rights in Crimea – the Crimean Human Rights Group and the Human Rights Field Centre.”  They will willingly assist them in becoming established and developing.

“In view of the above-mentioned threats, as well as its professional development and segmentation of specific areas of its work, the Crimean Human Rights Field Mission is changing the structure and format of its work and will act primarily in cooperating with these new associations, as well as with organizations within the ‘Initiative Group on Human Rights in Crimea.”

It remains to be seen how Russia reacts to the emergence of these new bodies.

The Crimean Field Mission calls on the UN, OSCE and Council of Europe to ensure permanent international presence and effective human rights protection for people living in Crimea.

As reported here, Crimean Tatar leaders this week announced that they are planning a civil blockade of Crimea.  This, they say, will only be stopped when Russia complies with specified and entirely fundamental human rights demands.  These include unobstructed access to Crimea of foreign journalists and civic activists (more details here).

Moscow claimed in 2014 that it was defending the rights of Russians in Crimea.  It provided no evidence of any discrimination against them to back their justification for armed seizure of control and annexation of Crimea.  They have since engaged in systematic violation of the rights of Crimean Tatars, ethnic Ukrainians and all those who oppose occupation, while arresting, exiling or criminalizing those who monitor such abuses.