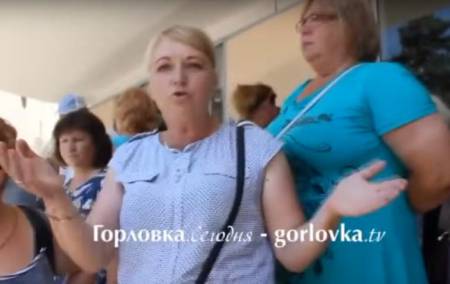 Attempts by Kremlin-backed militants in Horlivka, a city in the so-called ‘Donetsk people’s republic’ [DNR] to milk small business owners has prompted the first mass demonstration in the city since 2014.  Over a thousand people, mainly traders from the local market, are reported to have gathered outside the city administration protesting against the militants’ methods for extracting money and demanding a system like what they had under Ukrainian government control.

Ironically, it seems that the last major demonstration in Horlivka in 2014 was in favour of the May 11 pseudo-referendum, with the residents wanting to join Russia.  Since Russia has changed its position many times, with the militants forced to follow suit, it is worth recalling that the militants who first seized control were assuming – and promising - that Donbas would join Russia, and they did have support from a part of the population.

Two years later the situation – and the attitude to Ukraine - is dramatically different.  Over a thousand small business owners gathered on July 16 outside the city administration.  They were protesting against a new ‘law’ on small businesses which increases tax and ‘customs’ tariffs, and brings in a system where absolutely everything, including goods obtained before the militants seized control, must be included in an inventory of goods liable to taxation.

They had gathered, one of the women explained, to get these custom tariffs removed. Otherwise all of them would be bankrupted within a month, and they won’t be able to work.

The protesters said that they were there to demand a simplified system, without the current corruption where everybody is taking their cut on any pretext.  Under the Ukrainian government, one woman said, they only had to register once a year, they paid their money and that was enough.

«We pay everywhere.  Is our state that isn’t recognized by anybody not taking too much?  Who are they anyway?  Neither Ukraine, nor Russia, who are we?  And each day they think up laws!”

The crowd was large which may have emboldened the demonstrators, as would the lack of any way out if the militants don’t change the system.  Given the willingness of the local newspaper Horlivka Today to openly report the protest and criticize the so-called mayor Stanislav Kim, it is possible that Kim is under pressure from the militants.  He certainly did not endear himself to the protesters.  After long ignoring their demands to come out and talk to them, when he finally turned up, he suggested that they were gathered “like a herd”.

According to the local newspaper, the DNR’s ‘acting industry and trade minister Alexei Granovsky intervened, promising to form an initiative group from among the demonstrators to hold a round table with the so-called income and excise ministry.  IVVlada puts this rather differently, saying that Granovsky had persuaded some of the protesters to go to Donetsk for talks.  IVVlada had earlier reported protests in Donetsk and Makiyivka over the same lawlessness unleashed by the militants.  The DNR leader Alexander Zakharchenko’s people, residents complain, are demanding payment for everything.

The difference, however, is that those protests are learned about from social networks, with the local media largely muffling any such events.  The same was true earlier of miners’ strikes and reported punitive measures against those involved.

The demonstration on July 16 was on a large scale and was reported by one local newspaper.  Given the blistering criticism of the militants’ ‘republic’ and wish to return to the system under Ukraine’s authorities expressed, it would be hard to view it as orchestrated, but the media report is startling.

In June 2015, around 500 people protested in Donetsk, demanding that Kremlin-backed militants stop firing rocket launchers from inside Donetsk and stop using civilians as shields.  The protest was ignored by the militant-controlled media while some Russian channels, like Life News, actually tried to present it as a protest against the actions of the Ukrainian army.

The lie was exposed by Pavel Kanygin, then correspondent for the independent Russian newspaper Novaya Gazeta who reported the protest live (see: “Stop using us as shields!” Donetsk protests against Kremlin-backed militants )

Kanygin was detained, beaten and ‘deported’ from the militant-controlled territory the very next day.  Attempts by the newspaper to get a proper investigation initiated have been fruitless although the Russian foreign ministry is always eager to shout persecution when staff from pro-Kremlin media are accused of actions incompatible with journalism and denied entry to Ukraine, or deported.