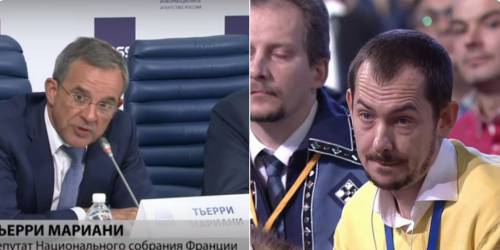 So how much do French parliamentarians take for their collaboration and propaganda services in justifying the invasion and occupation of the invasion and occupation of Ukrainian Crimea and muffling grave human rights abuses? Why are French elected representatives taking money from a Foundation almost certainly funded by Moscow?  The first question, posed a touch more delicately, by Ukrainian journalist Roman Tsymbalyuk was dismissed with outrage as “shitty’ byThierry Mariani, with his indignation diverting attention from the fact that he never actually denied remuneration.

As reported, the group of 11 MPs, 10 from Nicolas Sarkozy’s Republican Party and one ex-socialist, had begun praising developments in Russian-occupied Crimea, justifying Russia’s annexation and denying internationally recognized rights violations in the occupied peninsula while still in Moscow, before travelling illegally to Crimea last Thursday.  On August 1, they were back in Moscow and, of course, sharing only glowing ‘impressions’.

Tsymbalyuk, who works for the UNIAN news agency, was at the press conference attended by five of the latest group of “Kremlin friends” from France.  He points out that in over two years of Russian occupation, 16 French MPs out of 577, have proven willing to meet with representatives of the Russian occupiers on seized territory.  This, however, is enough for Russian pro-Kremlin media to treat the visit (generally called a delegation which it was not) as proof that the international community has recognized Crimea as ‘Russian’ and is willing to change the term ‘annexation’ to ‘reunification’.

Tsymbalyuk endured the MPs’ account of how life in Crimea is getting better, and merrier, by the day, and the denials of any discrimination against Crimean Tatars.  The French MPs however then suggested, as Tsymbalyuk puts it, “right here in Moscow, without leaving the cash till”, to engage themselves with the issues of Donbas, and were immediately, of course, invited to “take a safari to the occupied territory of Eastern Ukraine”.

Tsymbalyuk couldn’t stand it any longer and put two questions, both efficiently ducked through the flurry of indignation.

Would Russian State Duma deputies have to receive a French visa while visiting Corsica in the event of a military occupation of that island by the Russian army and a ‘referendum on joining the Russian Federation’;

How much did Russia pay the French MPs for justifying an act of international aggression?

Tsymbalyuk had not pulled any punches, but was still startled by the reaction.  Mariani absolutely immediately ‘rejected’ the question about payment and called it “shitty”. While demanding to know how much Tsymbalyuk is paid, Mariani also found a way of further praising his Russian ‘hosts’, claiming that the fact that Tsymbalyuk could ask such a “foul” question meant that Russia is a free country.

French journalist Benoît Vitkine has reported that the trip to Crimea was totally funded by the so-called ‘Russian Peace Foundation’, headed by Leonid Slutsky, an MP from Vladimir Zhirinovsky’s party who is himself under EU sanctions.  He accompanied both the visit by 10 French MPs last year (6 the same as this year), as well the one just ended.

The Foundation is supposedly a civic organization which presents itself as the successor to the Soviet Peace Council, a body with close KGB links.   It claims that it does not receive state funding, but has not disclosed its sources of income. The last recorded amount was from 2005 and suspiciously large (20.5 million roubles).

It seems, therefore, highly likely that this supposed Peace Foundation is, in fact, receiving Russian state funding.  As, of course, are the main media outlets, such as Russia Today, which made such a big thing out of the French MPs’ visit and extensively quoted their denial of any rights violations, their praise of a pseudo-referendum used by Russia to try to justify its land-grab, and promises to lobby for removal of all sanctions against Russia.

For two years in a row, the French Foreign Ministry has confined itself to expressing shock and indignation.  Whether it has looked into the question of funding is not known.  Given the overt conflict of interests, an investigation is certainly called for.

Whatever their motives, 11 French MPs, including Michel Voisin, a delegate to the OSCE Parliamentary Assembly, have taken part in unadulterated propaganda and lies.  It is seriously difficult to understand what kind of ideological considerations could be cited to try to excuse collaboration with a country which invaded part of a neighbouring sovereign state and is now persecuting Crimean Tatars and other Ukrainians who have continued to object to Russian occupation.

Even if Mariani and his cronies are ‘only’ interested in developing business, this is already in breach of their role as elected representatives.  Their deliberate denial of the undeniable suggests that scrutiny of any financial rewards is long overdue.

The French government should certainly consider, and preferably publicly address, the likely motivation of MPs who did not merely ignore grave human rights violations, abductions and politically motivated prosecutions but vociferously denied their existence.

Considering the number of lives destroyed, families torn apart and people imprisoned for opposing Russia’s invasion, any word to describe such behaviour would be far stronger than those Mariani found to avoid explaining his shameful collaboration.

The following outline just some of the rights abuses that the French politicians chose to deny.  Please feel free to send the links to them, preferably publicly

Russia jails for insisting Crimea is Ukraine, not for calls to terrorism in Europe