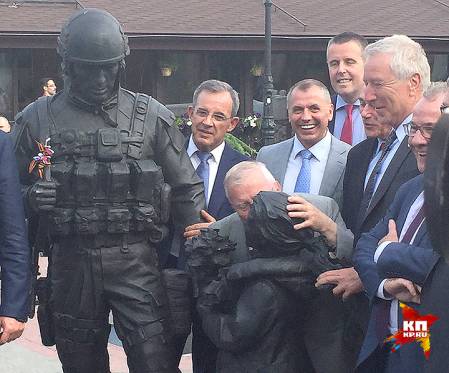 11 French MPs, mostly from Nicolas Sarkozy’s Republican Party, did not merely  breach Ukrainian law and international sanctions through their visit to Crimea this weekend. They also took part in a shameful propaganda show, denying flagrant human rights violations under Russian occupation and slandering Crimean Tatars who have been abducted, and very likely murdered

This was the second such ‘delegation’ for some of the participants and for the second year running, the French Foreign Ministry could express only ‘shock’ and say that the visit “risks violating international law”.

There was no ‘risk’, just direct violation, since the MPs had come from Moscow, clearly guests of an occupying state, and had not received permission from Ukraine.  They were very openly flouting the UN Resolution on Crimea from March 27, 2014 which France endorsed, along with other democratic countries.

As in 2015, the claim from some of the MPs was that they had come ‘to see with their own eyes’.   Michel Voisin, the head of the French delegation in the OSCE Parliamentary Assembly, was reported as saying that “the information coming from the media can be true as well as fake, so every lawmaker should have his own independent vision of such issues as the situation in Crimea.”

Voisin and the others therefore set off to Crimea where most Ukrainian and Crimean Tatar media have been stifled, and where Mykola Semena, one of the few remaining journalists to be expressing his own, independent views, was under 24-hour FSB surveillance and is now facing a 5-year prison sentence for no more than an article.

The French politicians saw only what they were shown, and there is nothing to indicate that any of them tried to delve further. That was very clearly not what they were there for, with this evident from the very first day.  The French MP in the above photo may have kissed the little girl rather than the fighter in the monument glorifying the Russian soldiers who invaded Crimea in February 2014, but the gesture was nonetheless telling.

The French politicians came this year, as last, to provide maximum propaganda for Russia and state-controlled media, including those aimed at other countries.  The aim was to give a semblance of legitimacy and ‘recognition’ to Russia’s illegal occupation of Ukrainian Crimea.

They went much further, however, in their collaboration, with the head of the ‘delegation’ Thierry Mariani truly excelling himself, The Kremlin-funded Russia Today, for example, quotes Mariani on the 2014 pseudo-referendum as claiming that “Crimea’s reunification with Russia reflects the will of the majority of the Crimean people”, adding, RT says, that “if it had not joined Russia, it could have been turned into a battle zone like east Ukraine.”

Mariani here is directly parroting Russian President Vladimir Putin, with as little respect for facts as Putin has demonstrated.  He begs the issue of why, if the referendum was so genuine, only pro-Kremlin politicians from far-right or neo-Stalinist parties were brought in to ‘observe’ it.  He also ignores the findings of Putin’s own Human Rights Council which indicated that the ‘official results’ had been faked, and that the level of support was much lower.

There was much worse.  Mariani also directly denied very real human rights concerns, in this collaborating closely with members of the occupation authorities.  Mariani was clearly in a hurry to please, and first voiced this denial in Moscow, before the ‘fact-finding mission’.  He is reported to have said that “Europe’s preoccupation with the Crimean Tatars, while disregarding discrimination faced by the Russian-speaking population in the Baltic States testifies to the double standards surrounding its national minority policies”.  He also told French RT that “it is better to be a Tatar in Crimea than a Russian in Latvia. But Europe prefers to forget about it.” 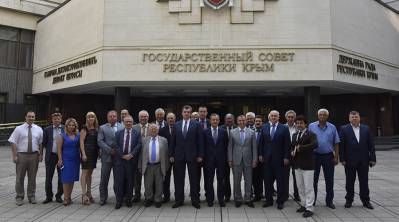 After meeting with “the Crimean authorities” on Saturday, he reportedly asserted that “talk about a large number of people who have disappeared without trace and the infringement of the rights of Crimean Tatars in Crimea are propaganda”.

He claimed to have received “absolutely specific answers to our questions”.  Such answers were provided, for example, by the de facto prosecutor Natalya Poklonskaya, who plunged to a new low on Saturday.   In denying the documented disappearances / abductions of a number of civic activists and Crimean Tatars, she suggested that some were not real.  Over two months after Crimean Tatar activist Ervin Ibragimov was abducted from near his home in Bakhchysarai, she claimed that the video footage showing him being forced into a vehicle by men in law enforcement officer uniforms could have been ‘provocation’, and that Ibragimov had been seen by witnesses a month later.  The assertion is especially brutal given the anguish his parents are experiencing, not knowing whether their son is alive.

The de facto authorities aroused suspicion from the outset by refusing to accept the report of Ibragimov’s abduction, and there is nothing to indicate that they have since taken any real measures to find him. Had there really been such sightings, they should have told his parents, not some French MPs eager to claim that all reports of abuses in Crimea are false.

Sergei Aksyonov, the leader installed after Russian soldiers seized the parliament buildings, repeated a claim made earlier though never substantiated.  He asserted that a number of the Crimean Tatars who have disappeared are fighting in Syria on the side of ISIS.  De facto Deputy Prime Minister Ruslan Balbek also saw fit to assert, for the nth time without any proof, that “Islamic radicals” were being trained to fight in Syria in the Kherson oblast, bordering on Crimea.

There have been numerous claims like this, with Mustafa Dzhemiliev, the 72-year-old world-renowned Crimean Tatar leader even claimed to be involved in training terrorists.

Such lies are designed, as are the arrests of Crimean Tatars on trumped up ‘terrorism’ or ‘extremism’ charges to create the impression of Crimean Tatars as somehow ‘extremist’ and dangerous. None of this was noticed by the French visitors.  There is no indication at all that they even tried to visit or ask about the ever-increasing number of political prisoners.  They made no mention of infringement of most civil liberties, nor of the criminalization of the Crimean Tatar Mejlis, the representative body of the main indigenous people of Crimea.

Decades ago, French writers who chose to muffle the crimes committed under Joseph Stalin tried to give an ideological coating to their craven lies.  Instead of merely expressing shock and indignation, the French authorities could usefully examine the motives behind certain politicians’ willingness to justify invaders and conceal their violations.