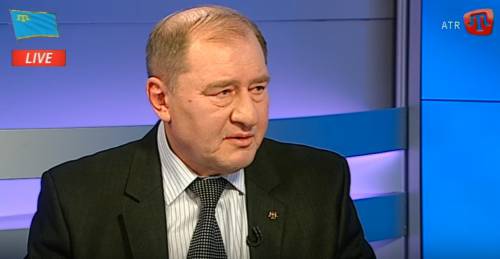 Russia’s prosecution of Crimean Tatar leader Ilmi Umerov on ‘separatism’ charges for rejecting Russia’s occupation of Crimea is political persecution, the authoritative Memorial Human Rights Centre has stated.  In calling for an immediate withdrawal of the charges, Memorial notes that the opinion Umerov expressed about Russia illegally occupying Crimea is shared by the international community.

Memorial’s statement was issued on August 3, Umerov’s 59th birthday.  Ilmi Umerov, one of the Deputy Heads of the Mejlis or representative body of the Crimean Tatar people which Russia has now declared ‘extremist’ and prohibited, was detained on May 12 this year.  His arrest came less than 2 weeks after the internationally condemned ban of the Mejlis and coincided with armed searches and arrests of yet more Crimean Muslims.  They remain in custody, however Umerov, who suffers from several serious medical conditions, was shortly released on a signed undertaking not to leave Crimea.

Umerov is charged with ‘public calls to carry out activities aimed at violating the territorial integrity of the Russian Federation via the Internet’, with this carrying a sentence of up to 5 years.

Memorial HRC notes that Russia’s FSB have charged Umerov over an interview given on March 19, 2016 in Kyiv in Crimean Tatar.  Via the ATR Crimean Tatar TV channel (driven out of Crimea, and now broadcasting from Kyiv), Umerov is accused of having issued calls to carry out action aimed at returning Crimea under Ukrainian jurisdiction.  He stated, for example, that “Russia must be forced to leave Crimea and Donbas”

“We consider that the opinion expressed by Umerov about the status of Crimea which is shared by a considerable part of the international community and Russian citizens and contains no call to violence cannot be the grounds for criminal or any other prosecution.”

Memorial goes on to call the article of the Criminal Code under which Umerov is charged unconstitutional and in breach of Russia’s international obligations since it criminalizes the mere expression of views regarding Russia’s territorial integrity.  It condemns the convictions under Article 280.1 of Rafis Kashapov; Darya Polyudova;  Alexei Moroshkin and Vladimir Zavarkin.   Kashapov, for example, is serving a three-year sentence for posts on the social network VKontakte condemning Russia’s annexation of Crimea and aggression against Ukraine, no more.

Memorial calls the prosecution of Umerov politically motivated and aimed both at preventing him from legal public activities and at intimidating Crimean Tatars and others who express a view in opposition to the official position regarding the status of Crimea, events in Ukraine and Russia’s policy with respect to Ukraine.

It is on a par, the human rights group says, with other repressive measures by the Russian authorities, such as the illegal ban of the Mejlis and the numerous criminal prosecutions of Ukrainian nationals, as well as of Russian citizens who condemn Russia’s policy regarding Ukraine.

See also: Russia jails for insisting Crimea is Ukraine, not for calls to terrorism in Europe