The trial underway in Rostov

Russia has long demonstrated that journalists, civic activists and all those who express independent views are at risk in Russian-occupied Crimea.  On Thursday, there was a disturbing indication that the lawyers representing political prisoners may also be in danger.

While two prominent lawyers were away on Aug 4, defending Crimean political prisoners on trial in Rostov, a concentrated attempt was made to break into their offices.  Although no search warrants were produced, there are strong grounds for believing this was the work of Russia’s FSB, probably together with personnel from the so-called ‘Centre for Countering Extremism’.

Emil Kurbedinov, a courageous rights lawyer defending many political prisoners and other victims of lawlessness, is in no doubt that the attack on his law firm is linked with his professional activities. 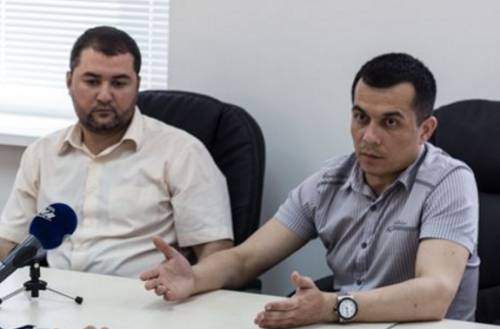 Both he and his colleague Edem Semedlyaev were known to be in Rostov, with only two female assistants in the Simferopol office.  The women barricaded themselves into the office and refused to open the door.  Kurbedinov reports that there were at least three men who did not identify themselves, behaved very aggressively and tried to kick down the door.

There have been all too many occasions since Russia’s invasion and annexation of Crimea when the borderline between enforcement officers and assailants has proven blurred.  The suspicion was strong that this supposed break-in was being staged to allow the FSB access to the premises and to confidential information about the lawyers’ cases.  The women did not therefore call the police since then they would have been forced to open the doors.

Kurbedinov later reported more disturbing details.  He believes that at least 13 men in plain clothes were involved.  Witnesses have told him that they recognized a few FSB officers, as well as ‘counter-extremism’ centre staff. These individuals, they say, were doing something with an Internet cable which leads to the building.

It is possible that this was a warning and act of intimidation rather than a genuine attempt to gain access to confidential information.  Russia’s FSB are known to be using extensive methods of surveillance.  Mykola Semena, the Ukrainian journalist who is facing a possible 5-year sentence for an article supporting the Crimean Blockade has good reason to believe that the FSB were following his progress in writing the article.  That would indicate 24-hour monitoring of his computer.

While the material in the law office is certainly confidential, most of the cases the men are dealing with are politically motivated, and the last thing the FSB would be likely to find is ‘incriminating evidence’.

Kurbedinov and Semedlyaev are both involved in two cases where defendants have already been declared political prisoners by the Memorial Human Rights Centre, and with good cause.

Crimean Tatar leader Akhtem Chiygoz, Ali Asanov and Mustafa Degermendzhy have been in custody for well over a year accused of involvement in a pre-annexation demonstration over which Russia has no jurisdiction.

Then there is the prosecution of 14 Crimean Muslims, almost all Crimean Tatars, who are accused of involvement of an organization – Hizb ut-Tahrir – which is legal in Ukraine.  There is nothing to justify Russia’s arbitrary decision in 2003 to declare the organization ‘terrorist’, nor in fact is there any proof that the men are now in any way involved in Hizb ut-Tahrir.

The first four defendants, all from Sevastopol, are currently on trial in Rostov.  The court hearings thus far have made it quite clear that ‘evidence’ is largely immaterial, and will be concocted where necessary.  A ‘secret witness’, for example, testified against all the men, with somebody clearly sitting in the room with him and prompting his suspiciously delayed answers.  This is the same court which sentenced Crimean filmmaker Oleg Sentsov and civic activist Oleksandr Kolchenko to 20- and 10-year sentences despite no terrorism at all.  In this case, 31-year-old Ruslan Zeitullayev is facing a life sentence; Ferat Saifullayev; Rustem Vaitov and Nuri Primov – 10-year sentences.

It was telling that the court on Thursday rejected the legitimate demands from the defence to be given a chance to question the ‘experts’, formal witnesses brought in when searches were carried out, and other such prosecution witnesses.  Some of the questioning was rendered impossible by a technical hiccup, yet the judge effectively blamed it on the defence and ended the court examination.  He also claimed, without any justification, that the defendants had refused to testify in court.

Kurbedinov has, for some time now, warned that the court is in fast-track conveyor belt mode.  He believes that the judge simply wants to convict and sentence the men without delay.

These are men who have done absolutely nothing wrong, and there are thus far 10 others who are facing similar sentences.  They include one human rights activist Emir Huseyn Kuku who was probably arrested after a previous abduction attempt went wrong, and suddenly turned into an FSB ‘search’.   Just over a year after Kuku’s failed abduction and a month after Kuku was arrested, another abduction, this time of Crimean Tatar activist Ervin Ibragimov, succeeded.  Ibragimov has not been seen since May 24 this year and there are grave fears for his safety.

Ibragimov is not the first activist to have disappeared without trace.  Kuku in turn is by no means the only rights defender who is facing prosecution and long sentences for his courage and civic position.

The events on August 4 suggest that Russia is now demonstrating that lawyers defending the victims of politically motivated persecution may themselves be in danger.