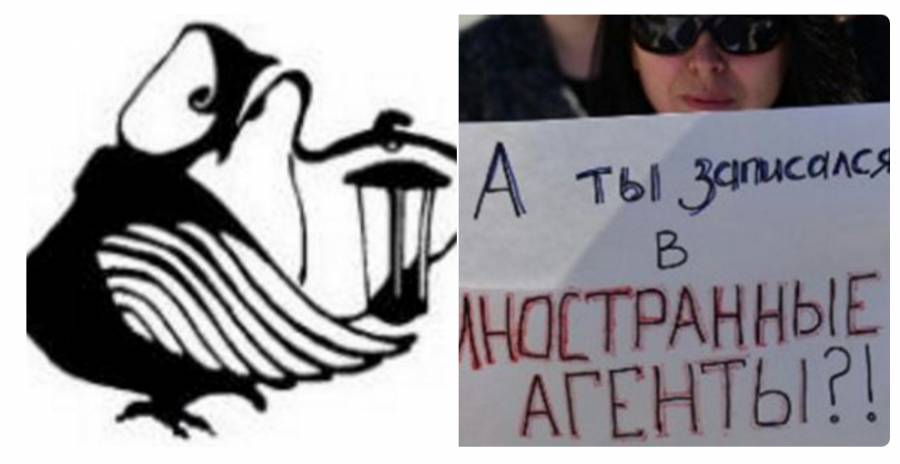 In the latest move aimed at crushing critical voices and independent NGOs in Russia, the justice ministry has announced it is forcibly adding the renowned Sova Centre to its notorious list of so-called ‘foreign agents’.  The reason almost certainly lies in the Centre’s monitoring and criticism of Russia’s ever-increasing misuse of dangerously broad ‘anti-extremism’ legislation.

The ministry’s announcement on Dec 30 simply states that the Sova Centre for Analysis and Information has been added to the ‘register of non-commercial organizations carrying out functions of a foreign agent’ after an unscheduled check.  However the Centre’s Director Alexander Verkhovsky points out that the formal act in full asserts that the organization “carries out the functions of a foreign agent, receiving foreign money and publicly assessing the activities of the state authorities”.

“Of course, we receive money. And we assess the activities of the authorities. I think that is what every citizen does. I find it totally incomprehensible how that is labelled political activities”, Verkhovsky told Interfax.

The Sova Centre will appeal against the decision.  Unfortunately, court challenges to other inclusions of equal absurdity have already been rejected, and the chances of success seem small.

The Sova Centre was founded in 2002 and has played a vital role in monitoring racism and xenophobia in Russian society, as well as relations between religion and society and human rights.  They have been vigilant in regularly reporting the increasing use of criminal prosecutions on highly questionable charges under the articles of the criminal code on so-called ‘extremism’ and ‘terrorism’.  The Sova Centre has, for example, condemned Russia’s ban on the Crimean Tatar Mejlis, (representative assembly).  Russia claims this self-governing body of the main indigenous people of Crimea is ‘extremist’.  The Sova Centre, however, considers the move unwarranted and politically motivated.  It has condemned many politically motivated trials of Ukrainians whom Russia is holding prisoner, as well as of Russian citizens, like Rafis Kashapov, sentenced to 3 years’ imprisonment for criticizing Russia’s invasion and occupation of Crimea. and Andriy Bubeev imprisoned for 2.5 years for two reposts, one an article entitled “Crimea is Ukraine”.

This is the latest of many attacks on internationally respected NGOs.

In October 2016, the International Memorial Society was forcibly added to the ‘foreign agent’ list.  The four grounds cited included the fact that Memorial had publicly called Russia’s actions in the East of Ukraine military aggression;

The decision, upheld at appeal level, flouts Russia’s own Constitutional Court which has stated clearly that NGOs registered as international cannot be ‘foreign agents’.

It is possible that the attack on Memorial is also linked with its vital role in helping to name and ‘rehabilitate’ the victims of Soviet crimes, especially under Joseph Stalin.  Memorial recently published a database of those directly implicated in implementing the Terror, which is also likely to have antagonized those in power.  The head of the Karelia branch of Memorial, Yury Dmitriev is currently in custody facing highly dubious charges.

The unscheduled ‘check’ of Memorial was announced at the same time as the inclusion on the register of the Levada Centre, Russia’s main independent pollster.  The Levada Centre had just reported a major slump in support for the ruling United Russia Party, and had a few months earlier reported a 10% drop in Putin’s popularity.  In July, it had investigated the public’s attitude to the Bolotnaya Square prosecutions after protests over Putin’s third term as president and found that 54% of respondents viewed the case as fabricated in order to deter people from protesting.

The law on so-called ‘foreign agents’ was first passed in 2012.  Russian NGOs engaged in something termed ‘political activity’ and receiving any funding from abroad had to register as a ‘foreign agent’.  This is not just aimed at stygmatizing such NGOs.  There are also serious practical repercussions with organizations likely to incur steep fines for not registering as ‘foreign agents’ themselves, and having to spend a major amount of their time reporting on all their activities, producing paperwork, etc.  The law was boycotted by a lot of civic organizations, so in June 2014 Putin signed into force a law which allows the Justice Ministry to forcibly include organizations on the register with this significantly restricting their rights and possibilities.  A new law which Putin signed exactly one year later was slammed by rights organizations as being aimed at destroying civil society altogether.  ‘Political activity’ has been so widely defined that it effectively includes criticism of corrupt officials, or groups of citizens who band together in defence of socio-economic rights.

A new law came into force on June 2, 2016 which makes it difficult to even criticize corrupt officials since this can be labelled ‘political activity’.  So, it transpires, can legitimate criticism of overt abuse of Russia’s anti-extremism legislation to stifle criticism of the regime.