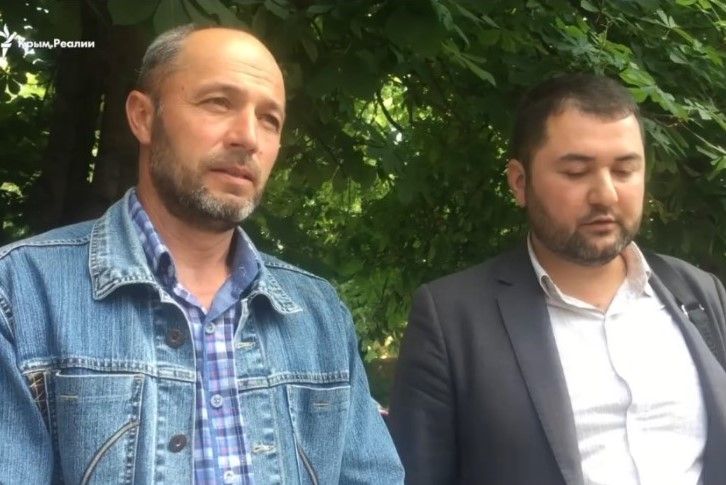 Two months after Crimean Tatar activist Bilyal Adilov was effectively abducted by unidentified individuals in camouflage gear and masks, it is Adilov who is facing trial in Russian-occupied Crimea for supposedly ‘threatening’ police officers and their relatives.

Russia’s ‘Investigative Committee’ has concluded a preliminary investigation into the charges that emerged a few hours after Adilov’s abductors proved to be working for Russian enforcement bodies.  Adilov’s lawyer, Edem Semedlyaev reports that the ‘criminal case’ includes testimony from the three ‘victims’, witnesses and two ‘expert assessments’.  The three men with victim status are all police officers who considered Adilov’s words to be a threat against their families.

Adilov was unaware of any investigation against him when he went to the Russian-controlled High Court in Simferopol where the latest detention extension hearing was due to take place with respect to five men, two of them Adilov’s neighbours.  The five, all family men with small children, were arrested on October 12 and charged with involvement in Hizb ut-Tahrir.  This pan-Islamist organization is legal in Ukraine and most countries, and Russia has never explained its decision to declare it ‘terrorist’.  Without any evidence that Hizb ut-Tahrir members have ever carried out acts of violence and usually without any proof that the men in question are linked to the movement, Russia regularly sentences men to huge, sometimes life, sentences.  In gross breach of international law, it is now carrying out the same tactics in occupied Crimea.

Adilov was reciting a prayer for the prisoners’ release when accosted by the men in masks who made no effort to identify themselves and simply dragged Adilov away to a blue Volkswagen minivan.

It was only considerably later that Adilov could phone his family and say that he was being held at the Investigative Committee.  He had thus been held for many hours before Semedlyaev was able to reach him to provide legal assistance.

It transpired only then that Adilov was being accused under Article 313 of Russia’s criminal code of “using force or threats against a representative of the authorities”.  This was how the Russian enforcement bodies decided to treat a verbal exchange between an OMON riot police officer and Adilov on Oct 12, during the arrest of his neighbours.

Adilov was released the following day on an undertaking not to leave Simferopol.  The father of six is now facing a trial and possible prison sentence of up to five years.  The behaviour of the enforcement bodies that day has never been investigated.

The Russian occupation authorities are increasingly using repressive measures against Crimean Tatars who actively, though peacefully, show solidarity with victims of persecution and report on armed searches and arrests.  This is the first criminal prosecution, however several activists have been jailed for up to 11 days on openly absurd pretexts, such as seven-year-old posts on a social network page that the person, Remzi Bekirov, had deleted.