Further reprisals against Russian blogger jailed for reposting that Crimea is UkraineRussian gets 2 years for reposting that Crimea should be returned to UkraineRussian blogger gets 2-year sentence for reposting that Crimea is UkraineMore reprisals against Tatar leader jailed for criticizing Russian occupation of CrimeaSo can you annex a country’s territory & jail those who criticize this for ‘separatism’?3-year sentence for criticizing Putin and Russia’s annexation of Crimea5 years imprisonment for criticizing Crimean annexation and Putin?Poet labelled ‘terrorist’, flung off Wikipedia for verse in support of UkraineRussian teacher on trial for poem against annexation of CrimeaKaliningrad ’flag prisoners’ charged with insulting the veterans Moscow rejects7 years for raising flag in protest at Russian invasion of CrimeaKaliningrad FSB finds ‘deep offence’ in a German flagRussia, the improbable human rights crusaderPutin’s selective terrorismPro-Russian thugs beat up Ukrainian unity demonstrators – except on Russian TVArmed men cut off Ukrainian channels in DonbasDonetsk television station seized to provide "correct" - Russian - coverageMoscow’s “Voice of the People” in SlovyanskMurdered in SlovyanskUS journalist released, others still held hostage in Slovyansk
• Topics / Freedom of expression 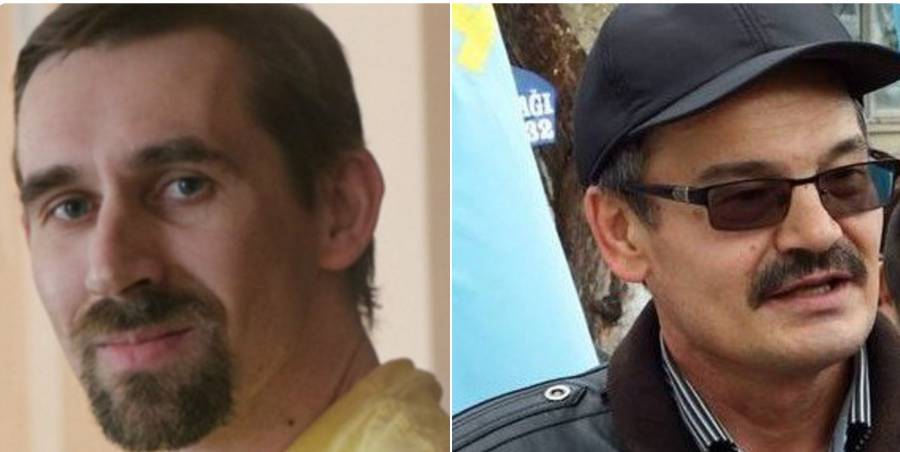 A map which correctly says that Crimea is Ukraine, and for which you could  get a long prison sentence in Russia or Russian-occupied Crimea

Russia’s invasion of Crimea in 2014 has not just led to grave human rights abuses on the occupied peninsula.  One of the victims of Moscow’s invasion and ongoing aggression against Ukraine, a new study points out, has been freedom of speech in Russia itself.  The regime has used events in Ukraine as a pretext for increasing restrictions, and there has been a huge increase in attacks on journalists and activists who speak out in defence of Ukraine.  The perpetrators enjoy impunity while victims who try to defend themselves can end up prosecuted.

The report ‘Freedom of Speech as Victim’ is important in giving a sense of the sheer scale of the assault on fundamental freedoms.  The authors – Pavel Chikov and Damir Gainutdinov from the Agora Human Rights Group are aware of almost 200 cases where Russian citizens have faced restrictions or persecution merely for their support of Ukraine and / or for discussing who Crimea belongs to.

Annexation, the report says, has directly or covertly exacerbated repression in a number of areas.  These include “an active purge of the Internet and libraries; a significant increase in pressure on independent media and NGOs; extension of the list of pieces of information classified as secret, and an increase in the number of criminal proceedings for alleged treason and spying.”

Moscow has effectively used all events in Ukraine, including Euromaidan, as an excuse for silencing independent voices in Russia.  This includes the blocking of websites of independent media, mounting persecution for so-called ‘extremism’ and bans on the activities of many civic organization.  Moscow pushes the line that the subject of Crimea is ‘closed’ and has adopted measures to punish those who join the international community in disagreeing.  In Russian several people have already been imprisoned effectively for calling an invasion and annexation by the correct terms.

There are numerous norms of the Russian criminal code that get used against people expressing support for Ukraine and criticizing Russia’s foreign policy.  Most commonly, people face charges under Article 280 -  public calls to extremist actions, carrying a sentence of 5 years, and 282 – incitement to enmity (6 years).  The sentences were increased a few years ago, with this making it possible to classify the supposed offences as of medium severity and remand those accused in custody.

A new article of the criminal code (280.1) punishing for something referred to as ‘public calls to action aimed at violating Russia’s territorial integrity’ was first adopted before annexation.  From its entry into force, on May 9, 2014,  there was concern that it would be used against critics of annexation, and the fears have proven justified.  The authors note that of 16 prosecutions they are aware of under that article, nine are over Crimea.

At least 10 Russian citizens have received real terms of imprisonment essentially for expressing a pro-Ukrainian position.

Rafis Kashapov has been imprisoned since December 2014.  He was convicted in May 2015 of the so-called public calls to action aimed at violating Russia’s territorial integrity and of ‘hate speech’, and sentenced to three years’ imprisonment.  His was the first conviction under Article 280.1 § 2, and was, quite literally, over his expressed opposition to Russia’s occupation of internationally recognized Ukrainian territory. The posts over which he was jailed can be found here.

Andrei Bubeev, Russian blogger and father of two small children, is serving a 2.5 year sentence for social network reposts of an article entitled “Crimea is Ukraine” and a picture of a toothpaste tube with the caption “Squeeze Russia out of yourself”

Alexei Moroshkin has recently been released after being held for well over a year in a psychiatric hospital, also for criticizing Russia’s aggression against Ukraine (details here)

The authors believe that other sentences and penalties, for ‘likes’ on Facebook, reposts, etc. are used to deter Russians from any discussion of events linked with Ukraine.

Yekaterina Vologzheninova was convicted in February 2016 of ‘inciting enmity’ for criticizing Putin’s war against Ukraine.  The case had gained huge publicity since she was effectively prosecuted for social networks ‘likes’, and she was sentenced ‘only’ to compulsory labour (details here)

Alexander Byvshev was convicted of ‘inciting enmity’ and sentenced to 300 community labour, thrown off Russian Wikipedia, added to the List of Extremists and Terrorists and dismissed from his teaching posts for poems in support of Ukraine (details here).  Byvshev is now facing new charges over a poem entitled ‘On Ukraine’s Independence’.  The charges are again under Article 282 of the Russian criminal code, with the investigators claiming that the poem constitutes ‘incitement to hatred or enmity, and denigration of human dignity’ (more details here).

In Saratov, Alexander Gozenko was sentenced to 160 hours of community work for supposedly ‘stirring up enmity’ towards the social groups ‘patriots of Russia’ and ‘vatniki’ (a derogatory term used about people who justify the worst excesses of Russian ‘patriotism’ and aggression).

The authors also devote attention to the persecution of Natalya Sharina, former Director of the Ukrainian Literature Library in Moscow (see Russia convicts Ukrainian library director of ‘anti-Russian extremism’), as well as harassment or prosecution effectively for Ukrainian symbols.

All of this has been accompanied by hysteria and open warmongering in the state-controlled media, with the latter often taking part in vicious, and very dangerous, hate campaigns and / or flagrant defamation against those public figures who speak out against Russia’s undeclared war.