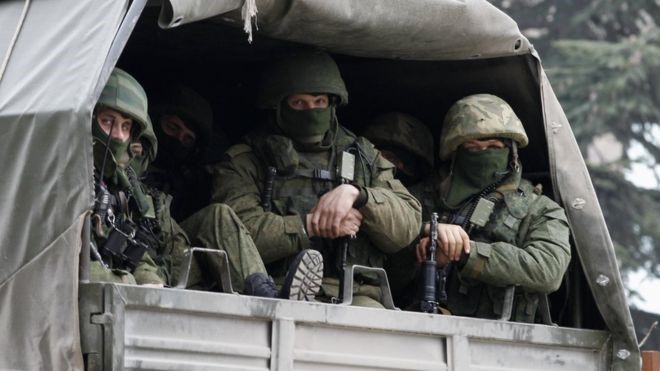 A new draft bill criminalizing denial of Russia’s military aggression against Ukraine has been strongly criticised by human rights activists for several reasons, including its authors’ failure to take into consideration the persecution Ukrainians living under occupation in Crimea or Donbas face simply for using words like ‘occupation’.

Draft Law No. 7354 was tabled by four MPs from the People’s Front, the second-largest faction in the Verkhovna Rada: Anton Herashchenko, adviser to the Interior Minister, former journalist and civic activist Tetyana Chornovol; Andriy Teteruk and Ihor Lapin.   It was registered, passed through the relevant committee and added to the agenda all on December 5, and presumably does have some chance of at least being considered shortly.

The bill would introduce a new Article 442-1 of the Criminal Code, entitled ‘Public denial of the fact of the Russian Federation’s military aggression against Ukraine’.

The article would read as follows: “Public denial of the fact of the Russian Federation’s military aggression against Ukraine; of the seizure through Russia’s military aggression of temporarily occupied Ukrainian territory in 2014; as well as preparation and circulation of material containing such denial –

are punishable by a fine from three to ten thousand times the minimum income before tax or deprivation of liberty for up to five years.

2. The same actions carried out by officials, or if repeated, would be punishable by imprisonment for up to five years.

Emotions do not make for good laws, and opposition to this one is not because anybody is denying Russia’s military aggression.

In their analysis of the bill, the Crimean Human Rights Group criticize it in the first instance for its total failure to take the situation of occupied Crimea and Donbas into account.  Ukrainians living in Crimea are quite likely to face criminal prosecution under Russian legislation for publicly calling Crimea part of Ukraine.  There is nothing theoretical about this.  Journalist Mykola Semena and Crimean Tatar leader Ilmi Umerov were both prosecuted for what Russia calls ‘public calls to action aimed at violating Russia’s territorial integrity. In an opinion piece, Semena had spoken openly of Russia’s occupation of Crimea, and got a 2.5 year suspended sentence. Umerov had said that strengthened sanctions would force Russia to leave Crimea and Donbas, and received a real two-year prison sentence (he was later part of a Kremlin-organized exchange, seemingly for two Russian suspected killers held in Turkey).   Crimean Tatar activist Suleyman Kadyrov is currently on trial, essentially for saying that Crimea is Ukraine.

The situation in Donbas is even more dire, since you can end up either seized and imprisoned or the victim of enforced disappearance.

Blogger Edward Nedelyaev was ‘sentenced’ to 14 years by the self-proclaimed ‘Luhansk people’s republic’ for ‘spreading negative information’ about the Russian-backed militants.

Journalist and blogger Stanyslav Aseyev has been held by militants of the so-called ‘Donetsk people’s republic’ since the beginning of June, with his mother able to see him only once.

The list of known prisoners is longer, not to mention those who have simply disappeared.

The human rights activists also point to other dangers in the proposed bill, including its violation of freedom of expression enshrined in Ukraine’s Constitution and the European Convention on Human Rights.  ‘

With respect to the possible five-year terms of imprisonment, the authors recall the position taken by the Council of Europe’s Venice Commission and  OSCE/ODIHR  in their assessment of Ukraine’s Law on the Condemnation of the Communist and National Socialist (Nazi) Regimes and Prohibition of Propaganda of their Symbols.  Among other aspects which came in for serious criticism was the possibility of similar terms of imprisonment.  The experts stated that: "Only those acts that constitute an actual danger to society should entail criminal responsibility, which should be proportionate to the seriousness of the offence committed. A mere display of a symbol or use of a name should not result in imprisonment.”

It seems certain that they would take the same view over the possibility of imprisoning somebody for five years merely for denying Russian aggression against Ukraine, however indefensible such denial is.