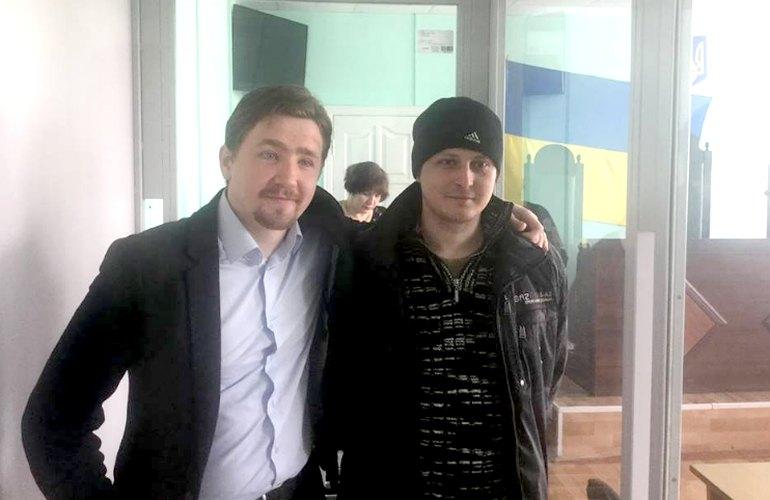 The appeal against the conviction and nine-year sentence passed in September 2017 by the Andrushivka Court (Zhytomyr oblast)  was thus allowed in part, but the men were not acquitted.  There is, however, a stricter time limit on house arrest, so it is possible that the two men will be freed before the new trial.  Vasylets had earlier asserted that the SBU [Security Service] had offered to release them as part of the exchange for Ukrainian soldiers and civilian hostages on 27 December 2017.  He said that both had refused.

Svitlana Novytska, one of the men’s lawyers, stated last year that the European Court of Human Rights had accepted as admissible their application against what she called the men’s illegal detention.  They could not yet lodge an application over any sentence since all legal avenues must have been exhausted in Ukraine, and indeed the appeal court has revoked the sentence.

As reported, Vasylets and Timonin were arrested by the SBU in November 2015 and accused of helping the self-proclaimed ‘Donbas people’s republic’ [‘DPR’] set up the pro-Russian and extremely anti-Ukrainian ‘Novorossiya TV’ propaganda channel.

The two men were convicted on 29 September 2017 of  providing “material, organizational or other help in the formation or activities of a terrorist organization” (Article 258-3 § 1).

Timonin, who was an active participant in Anti-Maidan, and strongly supported the pro-Russian militants in Donbas, had also been found guilty of public calls to commit acts of terrorism (Article 258-2 of the 2006 edition of the Criminal Code) and of incitement to enmity based on race, nationality, religious views, etc. (Article 161).  Although sentenced on these charges to 5 years’ imprisonment and restriction of liberty, respectively, the court had ordered that these were to be served at the same time as the 9-year sentence.

Both men had denied the charges, and Timonin asserted that the highly inflammatory posts on his social media (VKontakte) page, on which the extra two charges were based, were not his.  The defence also disputed the classification of ‘DPR’ as a terrorist organization.

Both men were also members of the Public Council under Ukraine’s Ministry of Information Policy, with Vasylets even the Deputy Chair.  This caused embarrassment and some questions raised in the Ministry and in media circles.  It was also invariably brought up by those supporting the men to push the idea that Vasylets is a journalist and human rights activist, and his imprisonment an attack on freedom of speech.   It is likely that the men’s lawyers will insist to the Court in Strasbourg that their clients’ right to liberty was infringed because of the time the men were held in custody, which was partly due to the constant postponement of court hearings.

The grounds for the Court of Appeal’s ruling have not yet been made public.  It is not clear whether the court simply felt that the 9-year sentence was too long, or if there were other issues behind the order of a retrial.

Since the men were not acquitted, the following details may be helpful, although it must be borne in mind that the verdict was revoked.

Vasylets and Timonin both denied all charges, and asserted that neither had had anything to do with setting up Novorossiya TV.  The verdict, over 25 pages, set out all the evidence which appeared to refute this claim.  The posts which form the justification for the specific charges in Timonin’s case proposed “to get rid of Maidan scum” [the original is more offensive] and to seize police stocks of arms and use them for a purge of members of the Right Sector nationalist organization.  The VKontakte page cited in the verdict is hidden and, in any case, it would require professionals to ascertain that material had been posted by somebody else as Timonin was asserting.  It is not clear whether such an analysis was carried out.

Vasylets’ claim that he sought to tell ‘the truth’ about what was happening is simply not borne out by the considerable evidence remaining of the distorted picture that such channels sought to achieve, and the methods used to do so.

Novorossiya TV was, and largely, remains part of that propaganda machine.

Whether there is adequate proof of Vasylets’ and Timonin’s involvement will now be again considered by a first-instance court.  It is likely that the defence will continue to argue that ‘DPR’ cannot be called a terrorist organization’.

Stimson under the UK Terrorism Act for his part in the fighting in Donbas on the side of the Russian and Russian-backed militants.