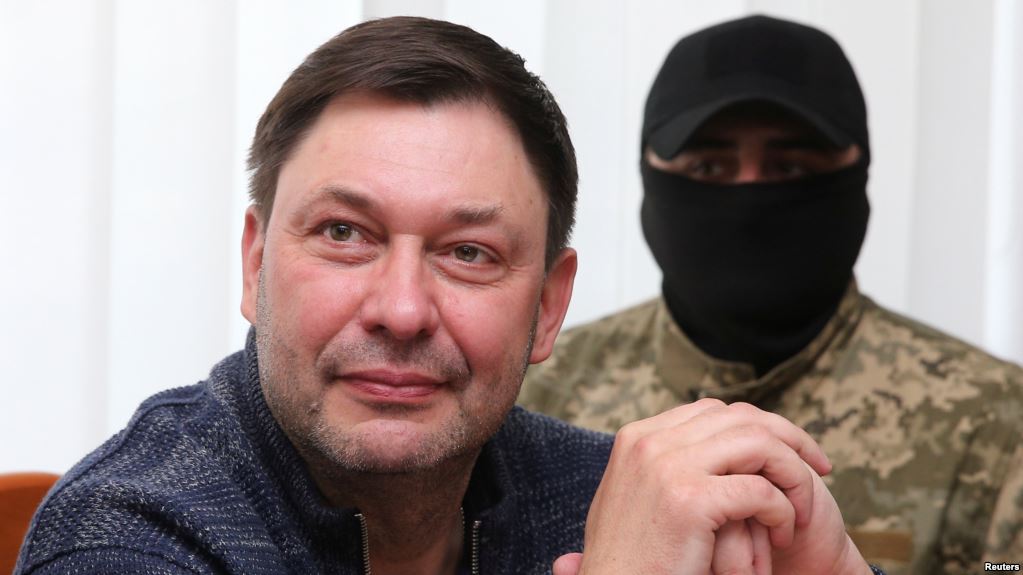 There has been a startling divergence in the reaction to the arrest of RIA Novosti Ukraine’s General Director Kirill Vyshynsky and the search of the agency’s offices. Prominent Ukrainians known for their opposition to censorship in any form stress only that the charges must be fully proven, while a number of western media watchdogs have expressed deep concern.  In one case, Ukraine’s authorities are effectively accused of “criminalization of alternative news and views”.

Ukraine’s Security Service, or SBU announced on 15 May that they had uncovered and documented “the use by the aggressor state of both Ukrainian and Russian journalists in carrying out subversive activities” against Ukraine.

Five searches – of the agency’s offices and private homes -  were carried out on 15 May by the SBU together with the Prosecutor of the Autonomous Republic of Crimea.

The SBU asserts that in 2014, Dmitry Kiselyov, Director of the Russian state-owned ‘Russia Today’ and described by the BBC as “Russia’s chief spin doctor’, ordered that Kirill Vyshynsky be appointed head of the Ukrainian office of Russia Today.

50-year-old Vyshynsky has both Ukrainian and Russian citizenship – a situation which is, strictly speaking, not allowed in Ukraine but which is not uncommon.  He is accused of taking part, on instructions from Moscow, in Russia’s information war against Ukraine.  The charges of state treason, under Article 111 of Ukraine’s Criminal Code, could carry a sentence of up to 15 years’ imprisonment.

Vyshynsky was taken to Kherson (the nearest oblast to occupied Crimea), where the Kherson City Court on 17 May remanded him in custody for two months.

The SBU allege that Vyshynsky founded a number of legal entities, including Interselect, which is known as RIA News Ukraine.  They assert that the network of entities was created primarily “to conceal the Russian sources of financing for the resource and the contacts between this structure and the Moscow office of Russia Today”.

Most of the international media watchdogs have demanded to know what the charges are about although the SBU report and briefing does essentially make this clear.  SBU investigators have allegedly established that during the Spring of 2014, Vyshynsky went to Crimea where, on the instructions of the Russia Today management, “he personally took part in propaganda campaigns aimed at supporting annexation and the joining of the peninsula to the Russian Federation. For his action in support of the aggressor state, Vyshynsky was, via a secret decree from the Russian President awarded a medal: ‘For services to the Fatherland’.

This is the only award published on the official SBU website, although media reports and the Facebook page of Prosecutor General’s Office spokesperson Larisa Sarhan report that another Russian award – ‘For the return of Crimea’ was found, with Sarhan providing a photograph of that medal.

The International Criminal Court’s Chief Prosecutor has already established that the annexation and occupation of Crimea constitutes an international armed conflict.  It was one that was started by Russia’s invasion, deploying soldiers without insignia, so an award to any Ukrainian for their role in those events would be especially incriminating.

The SBU report includes a screenshot of a report from RIA Novosti Ukraine from 16 March 2018, under the title: “Referendum in Crimea: not leaving, but returning’.  The text visible reads: “However awareness of this will come later to the high officers of the geopolitical leaders of the world.  Today Crimea and Crimeans are triumphant.  And pin their hopes on Russia”.  The photo is of Russian flags and a child smiling.

A photo is also shown of Vyshynsky wearing the ‘For services to the Fatherland’ medal .

The SBU asserts that after returning to Kyiv, Vyshynsky hired journalists to prepare material in support of the so-called ‘Donetsk and Luhansk people’s republics’ [D/LPR], which in Ukraine are deemed terrorist organizations.   Two examples are provided, both of them undoubtedly providing a pro-Russian and highly misleading impression of the military conflict in parts of the Donetsk and Luhansk oblasts.

In order to conceal their activities, the SBU allege, ‘Russia Today’ used a setup involving a contract between Interselect and a company in Belgrade (Serbia).  it is alleged that this firm is a front which was used to send almost 53 thousand Euros of Russian origin each month to the accounts of the Ukrainian enterprise controlled by Vyshynsky. He is claimed to have told his subordinates that he understands “that we have an information war but we need to at least create the appearance of objectivity”.

The SBU says that during the five searches carried out , documents were removed  “which fully confirm” their accusations regarding the organization by representatives of Russia Today of a network of media resources in Ukraine providing subversive, information war activities against Ukraine.

Viktoria Syumar, former Director of the Institute for Mass Information, now the Head of the parliamentary committee on freedom of speech gave a brief comment to Censor.net on the day of the searches.  She noted that there had not been such severe measures in all the years of the Ukrainian – Russian conflict, and she assumed therefore that the SBU had evidence to warrant their detention of Vyshynsky.

“I do not think this is linked with his journalist activities. It could be connected with activities as an agent.  You know, Ukrainian journalists are detained both in Minsk and in Moscow, and imprisoned.  We haven’t had this and obviously the evidence will need to be provided.  If there is proof, then the measures are adequate given that we are currently in a state of war”.

Political analyst Volodymyr Fesenko expressed surprise that the Ukrainian authorities were only now, after four years, objecting to RIA Novosti Ukraine.  Since 2014 Ukraine has banned the broadcast of a number of Russian television channels because of its anti-Ukrainian propaganda, and he doesn’t understand why all that time RIA Novosti Ukraine continued its activities.  With the replacement in 2014 of RIA Novosti with the ‘international information agency ‘Russia Today’ – RT, Fesenko says that the Russian agency became a propaganda institution.

With regard to the specific, very serious charge against Vyshynsky of state treason, Fesenko says that it is difficult to comment, but does note the reports that a Russian medal was found ‘For the Return of Crimea’.  If so, then what was his part in this so-called ‘return’?  “Since helping the annexation of Crimea is involved, then of course, the fact of unlawful actions is clear”.

Natalya Ligachova, prominent media expert and Chief Editor of Detector Media, also stresses the need for irrefutable proof.  She believes that there is a general problem worldwide in determining what constitutes journalist activities, and whether these can include propaganda.  She suggests it would make sense for the SBU to demonstrate the set up for financing the agency’s activities, and believes it possible that Vyshynsky could be accused of acting as an agent.

Vyshynsky’s lawyer Andriy Domansky has complained of “numerous procedural infringements” during the searches, though does not specify what they consisted of.  He is also highly critical of the Ukrainian authorities for making its evidence public, though neither confirms nor denies its authenticity.

Russian President Vladimir Putin and Russian state-controlled media have made much of what Putin claimed to German Chancellor Angela Merkel was “an extraordinary example of persecution of the media”.

There is a great deal to say about Russia’s persecution of Ukrainian journalists such as Crimeans Mykola Semena, Nariman Memedeminov, as well as Ukrinform correspondent Roman Sushchenko, though that would obviously not justify similar behaviour from Ukraine.

It is critical that the SBU avoids any irregularities and that it is able to substantiate all claims made, particularly with respect to the medals allegedly received by Vyshynsky.

OSCE Representative on Freedom of the Media Harlem Désir “raised concern” on the day of the searches.  He called on Ukraine’s authorities to “refrain from imposing unnecessary limitations on the work of foreign journalists”.

“The fight against propaganda must not fall short of international standards and should not represent disproportionate interference in media activities,” he added.

Reporters without Borders has also expressed concern, and fairly openly expresses its scepticism that the evidence against him presented by the SBU, namely “three screen captures of opinion pieces written by other people and published on the website of his media” constitute proof of treason.  The media watchdog mentions the alleged Russian medals, but does not explain what they are said to be, which is important.

RWB notes that the arrest came a few hours before Russia’s illegal Crimea Bridge was opened, and explains, rather inadequately, that “Ukrainian legislation refers to Russia as an “aggressor state” because of its annexation of Crimea and its support for eastern Ukraine’s separatists”.

The Committee to Protect Journalists also reacted within hours of the events on 15 May, though rather strangely quoting a scrappy report from Interfax quoting Prosecutor General Yuri Lutsenko. CPJ did, however, also cite the SBU’s official statement, so was aware that the charges were of rather more than simply “anti-Ukrainian” reporting. CPJ calls on Ukraine “ to disclose the charges and evidence they have against Vyshynsky or release him without delay”, with CPJ Europe and Central Asia Program Coordinator Nina Ognianova then demanding that the Ukrainian authorities “stop harassing and obstructing Russian media operating in Ukraine. The criminalization of alternative news and views has no place in a democratic Ukraine."

There were also responses from the US State Department and others.

The term “alternative news” certainly sounds better than the ‘alternative facts’ that Kellyanne Conway, US Counsellor to President Donald Trump recently defended.  It is still very far from expressing the reality of a situation where the media played a direct role in Russia’s undeniable invasion of Crimea and active engagement in the military conflict in Eastern Ukraine.  This role was detailed by former employees of Russian state-controlled TV channels in interviews to Coltra.ru. The journalists spoke of how the management had received instructions on the language required (‘junta’, ‘fascist’, etc.) in describing the post-Maidan government in Ukraine and the subject matter.  There was a constant barrage of claims that Ukraine was using phosphorous bombs, was bombing whole villages, etc., with the footage taken from films or from wars in other countries. In June 2014, Russia’s Foreign Minister Sergei Lavrov proposed an urgent UN Security Resolution on the situation in Ukraine.  The ’evidence’ which he claimed proved Ukraine’s use of phosphorous bombs in fact dated back to Iraq in 2004.  On another occasion, the footage from the North Caucuses was pulled out as ‘proof’ of supposed Ukrainian atrocities in Donbas. This is not to mention cases that were regarded as excessive even by Russian audiences, such as the fake witness who claimed that Ukrainian soldiers had ‘crucified’ the small child of a militant fighter, with his mother forced to watch before herself being killed.

Russia’s invasion and annexation of Crimea was presented in entirely different fashion by the state-controlled media, while Ukrainian channels were blocked, and soon driven out of Crimea, together with independent journalists.  The claims that Russia was ‘forced to intervene’ to prevent a bloodbath, that ‘the Crimean people’ had overwhelmingly voted to join Russia and other myths were fuelled by the propaganda media.  Where such “alternative news” turns into bloody incitement may be debatable, however the deliberate lies told for the past four years by Russia Today about a non-existent ‘massacre’ by Ukrainian ‘radicals’ in Odesa on 2 May 2014 are known to have caused many young men to go to kill and often be killed in Eastern Ukraine.