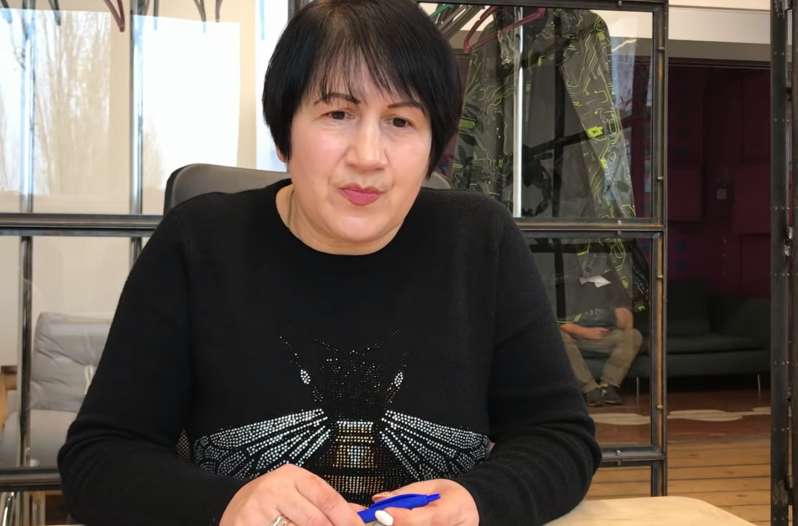 Valentina Buchok is recovering in hospital after treading on a grenade left outside her home in the Donetsk oblast.  The police are treating this as attempted murder  It is to be hoped that this time they investigate properly as this is the second attack on the former hostage who was savagely tortured and imprisoned in the Russian proxy Donetsk ‘republic’ and can provide vital testimony against the Russian-controlled militants and against the company linked to Ukrainian oligarch Rinat Akhmetov.

According to the ex-hostage’s brother, Anatoly Buchok, Valentina has numerous shrapnel words and has been operated upon in a hospital in Kostyantynivka.  The explosion occurred early in the morning of 20 June as Buchok went out to feed the animals.  According to her brother, the device exploded when she opened the gate.

There has already been one such attempt on Buchok’s life.  In October 2019, her husband noticed another similar device in time, and nobody was hurt.

Ludicrously, Valentina Buchok was forced to take her former employers to court after they tried not to pay her, although she had been captured while carrying out her work for them as an electrician.  After she won the appeal, Buchok explained to Radio Svoboda that the money was pitiful, but that this had been a matter of principle. Buchok had already won the first-instance court case against Donetskoblenergo, demanding that the company both investigate her being taken prisoner at work and that they pay her for the period when she was prevented from working.  The company appealed against the first ruling in her favour and lost a second time.

As reported, Buchok was seized by the militants in the so-called ‘Donetsk people’s republic’ [DPR] in February 2017.  They grabbed her in the middle of the working day as she walked along the street.  She was actually heading towards the company’s main office to seek an answer to her numerous reports that it was dangerous to work in Donetsk. She had never concealed her pro-Ukrainian views and said that she had faced threats.

One of the most nonsensical part of the militants’ claims about Buchok was that she had carried out a ‘reconnaissance visit’ to the apartment of Russian mercenary and war criminal Arseny Pavlov (‘Motorola’).  Since this was a month after Motorola was killed, there could be no point in such ‘reconnaissance’.  The militants did not like a lot of the photos in the two phones Buchok had on her.  She says that some of these photos were taken “before the war” as proof of electrical work carried out, etc..

Buchok was first taken, with a bag over her head, to the so-called ‘DPR ministry of state security’ and then to ‘Izolyatsia’, the former cultural centre which the militants seized in June 2014 and turned into a secret prison.  Former hostages who were held and tortured in Izolyatsia refer to the place as ‘a concentration camp’, and all testimony about the methods used, those who are in charge, etc. are of enormous importance.

Buchok says that other prisoners advised her immediately to agree to whatever the militants said as there was no point in trying to prove that she was not spying.  Once they ‘sentenced’ her, there was hope that she would be placed on the exchange list as did, indeed, happen.  It is clear from Buchok’s account that she was also fearless in not concealing her pro-Ukrainian views, her refusal to recognize DPR as anything but “armed bandits”.   She was ‘sentenced’ to 17 years’ imprisonment for supposed ‘spying’ and released in the December 2017 exchange.

Buchok has already given vital testimony about the torture chamber inside Izolyatsia, and would be an important witness for the International Criminal Court and the UN’s International Court of Justice at the Hague.  She can, however, and already has given important, and extremely incriminating, information about the ways in which DTEK, a firm linked to Ukrainian billionaire Rinat Akhmetov collaborated with the Russian proxy ‘republic’.