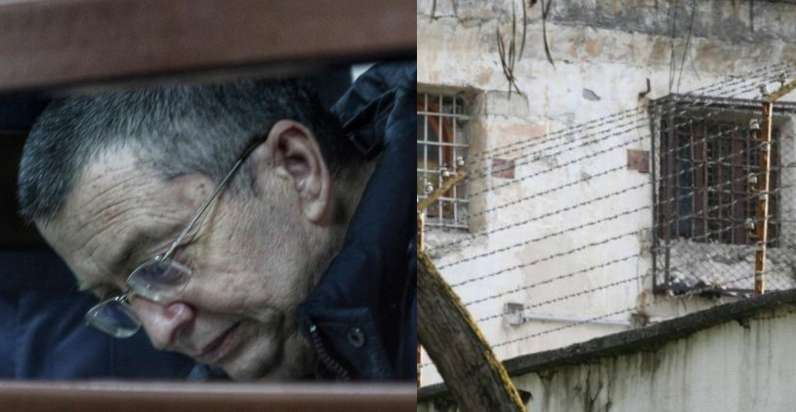 At least 10 cells in the appallingly overcrowded SIZO [remand prison] in occupied Simferopol are ‘under quarantine’ with this almost certainly meaning that prisoners have been infected with Covid-19.  Although the Crimean Human Rights Group is aware of  cases of pneumonia, Russia is fiddling the records and placing Crimean prisoners’ lives in danger by not ensuring proper diagnoses and not testing for Covid-19.  This is true both of political prisoners held in occupied Crimea, and those in the Russian Federation, with the situation especially critical for a number of prisoners in their fifties and sixties with serious medical issues.

The overcrowding, filth and unsanitary conditions in the Simferopol SIZO have been of major concern for many years.  of concern for many years.  In a stuffy cell of 30 m², in which 14 men are forced to take turns to sleep on 10 bunks, and probably use a scarcely cordoned-off ‘toilet’, the danger from coronavirus and other infectious diseases is immense.

While placing men’s lives in jeopardy, Russia is also using the pandemic to further restrict the rights of political prisoners. In Rostov-on-Don, where a number of political prisoners are now held during their ‘trials’, their lawyers are only able to speak with them in the short-visit rooms through glass via a telephone.  Most worryingly, this is under the scrutiny of Russian SIZO guards, which is a serious violation of their right to defence.

At least two Crimean Tatar prisoners of conscience – Muslim Aliev and Server Mustafayev – have been ill with symptoms that are certainly identical to those associated with Covid-19.  Mustafayev received absolutely no medical attention, while Aliev disappeared at a time when human rights defender Emir-Usein Kuku and four other political prisoners from the Yalta region were being sent on the gruelling journey to Russian prisons. Aliev’s family were put through weeks of hell before he finally arrived at the prison in Bashkortostan (please write to Aliev; Kuku and the other men).

In June, there was an outbreak of Covid-19 in the Russian SIZO in Rostov where at least three Ukrainian political prisoners - Crimean Tatars Eskender Abdulganiev and Arsen Abkhairov, and Ukrainian Jehovah’s Witness Serhiy Filatov.

Nobody is suggesting that strict quarantine measures may be required to prevent a highly contagious disease from spreading further.  The best such measure, however, in the case of Ukrainian political prisoners who are not even accused of an internationally recognized crime would be to release them, at least under house arrest.  Instead, they remain imprisoned and deprived of medical care.  Oleh Prykhodko recently threatened to slash his wrists, the only means left to him to protest the ongoing refusal to merely pass on the medication the 62-year-old urgently needs and which his family Is providing.  56-year-old Volodymyr Dudka was about to undergo an important operation on 9 November 2016 when he was seized by the FSB in occupied Sevastopol.  He has never received proper medical attention, and his family have also had problems getting medication to him.  At least three other men currently held in Crimean or Russian SIZO: 59-year-old Enver Omerov; 60-year-old Servet Gaziev and Dzhemil Gafarov (58) have very serious medical conditions.

Gafarov’s situation is particularly shocking since his fourth stage kidney disease, which is only a step away from kidney failure,  is, even according to Russian legislation too serious to permit the use of detention.  Gafarov’s wife explains that he is effectively experiencing a permanent state of blood poisoning, with the level of filtration of his kidneys between a quarter and a third of what they should be. The kidney disease also caused him to have a serious heart attack in 2017.  None of this has stopped Russian-controlled and Russian ‘courts’ from extending Gafarov’s detention since 27 March 2019 when he was arrested in Russia’s most flagrant ‘operation’ against Crimean Tatar civic activists and journalists