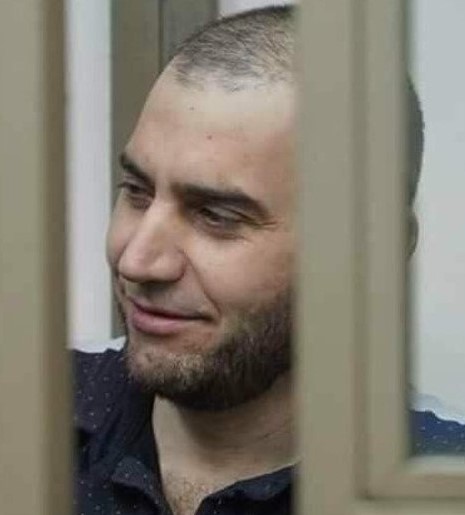 A week has passed since Muslim Aliev’s family learned that the Ukrainian political prisoner was showing clear symptoms of Covid-19 and that a test for the deadly virus had been positive.  Aliev was, reportedly, taken away and, with no information even as to his whereabouts, his family are understandably very concerned.  Aliev, whom Amnesty International has recognized as a prisoner of conscience is 49 and has spent the last four years and more in the appalling conditions of Russian captivity, with this likely to have seriously undermined his state of health.

It was on 20 August that lawyer Edem Semedlyaev reported having been unable to visit Aliev or several other political prisoners who were being held, in transit, at a remand prison in Ufa (Bashkortostan).  He was able to see only Arsen Dzhepparov, and was told that Aliev was feeling ill with pronounced Covid-19 symptoms, and that Refat Alimov, Inver Bekirov and Vadim Siruk had all been in contact with him, and were being kept in isolation. There is very little detail, however an officer did speak of a coronavirus test having been taken.  It seems that Siruk may have also contracted the illness, but his condition was satisfactory.

That same day Ukraine’s Human Rights Ombudsperson, Lyudmila Denisova wrote that Aliev had been wrapped in some kind of film and taken away somewhere.  It is not clear what Denisova’s source of information was, but a week later, with no news about Aliev’s condition or his whereabouts, his wife, Najiie, is obviously frantic with concern.

The conditions in Russian prisons are always shocking, but the worst, and most dangerous, situation is when the political prisoners are being moved, as lawyers and the men’s families can be deprived of any information about them for months. Russia is compounding all other violations of international law through its persecution of Ukrainians from Crimea by imprisoning them in Russia,  thousands of kilometres from their families – and, it should be said, from the western media.  The latter is not irrelevant in this case as the six Ukrainian Muslims from the Yalta region gained international publicity because of the targeting of human rights defender Emir-Usein Kuku.  It was he who was first declared an Amnesty International prisoner of conscience, however the international rights NGO later gave this status to all six men.  Their trial and the horrific sentences that were passed received international condemnation and, like with Ukrainian filmmaker Oleg Sentsov, it is likely that Russia chose Bashkortostan for their imprisonment because of its distance away from Moscow, as well as from Crimea.

Kuku is the only one of the six men who has, reportedly, already reached the prison where Russia is planning to illegally hold him (Prison Colony No. 16 in Salavat (Bashkortostan).

Kuku had been active in the Crimean Contact Group for Human Rights and had already faced persecution for this, including a likely attempted abduction which only turned into an ‘FSB search’ after passers-by came to Kuku’s rescue.  It was thus clear immediately that the new, supposed ‘terrorism’ charges, were politically motivated.

The same, albeit for slightly different reasons, was true of Aliev who, since 2005, had played a very active role in the ‘Alushta’ Muslim Community.  The Community’s independence had brought it into conflict on many occasions with the Muftiate and his family believe that this was the reason for his arrest.  Although the conflict predated Russian occupation, it was the decision by the Mufti of Crimea, Emirali Ablaev in 2014 to begin collaborating with the occupation regime, that was to be fateful for Aliev and for many other Muslims.  Ablaev’s reward for his loyalty to Moscow was ‘official status’ in Crimea as the only ‘correct’ Islam.  He and the Muftiate are believed to have sought to strengthen their position and / or eliminate religious ‘dissidents’ by helping the FSB persecute them.