Russians name Stalin as the most ‘outstanding’ figure of all times 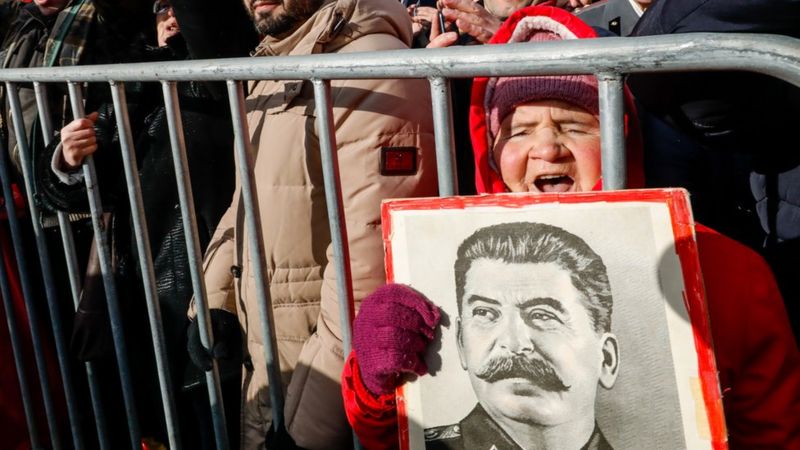 Russian with a portrait of Stalin Photo TASS (2020)

The renowned Levada Centre has carried out a survey to find out whom Russians would name as the “ten most outstanding [выдающиеся) figures of all times and nations”.  While nobody received an absolute majority, Soviet dictator Joseph Stalin was very clearly ahead, being named by 39% of the respondents.  This is not surprising given Russia’s increasing ‘rehabilitation’ of Stalin since Vladimir Putin first came to power and increasingly repressive measures to muffle Stalin’s crimes and those of the Soviet regime.  The less predictable result of this survey is that, while Stalin’s rating had only increased by one percentage point since 2017, Putin had fallen massively from second place during the earlier survey at 34%, to 15% in late May 2021.

The Levada Centre have been taking these polls since 1989 as part of their study of ‘the Soviet person’.  In general, they make for very disturbing reading.  In 1989, Vladimir Lenin was named by 71%; Peter 1 by 38% and Stalin by a mere 12% - less than the 17% who named Mikhail Gorbachev.  The latter had disappeared altogether by 1994.  By 2021, Lenin was behind Stalin (on 30%) and Peter 1 was named by a mere 19%.  Essentially no liberal figures since the collapse of the USSR even get a mention, while Andrei Sakharov (who died in December 1989) went from no mention in 1989 to 17% in 1994 and only 7% in 2021, the centenary of his birth.  Although respondents are asked to name people “of all times and nations”, there were relatively few non-Russian / non-Soviet figures even in 1989, and only three in 2021 (Albert Einstein; Napoleon Bonaparte; and Adolf Hitler).  The fact that Hitler is mentioned probably suggests that many respondents were searching for prominent figures, without this necessarily having the positive connotations that the word ‘outstanding’ normally has in both Russian and English.

Levada Centre Director Lev Gudkov points out that the people named are essentially from the pantheon of typical Soviet name-symbols, beginning with Lenin and Stalin. Although the collective memory of others is fading, new names are not emerging.  Each such survey in the past has had around 300 names mentioned, however there was no noticeable consensus on other figures.  Gudkov also notes that since 2008, the general number of names mentioned has fallen by 1.6 times.

“This is possibly a result of escalating censorship and the foisting of ‘traditional values’, which are in fact of little importance for the public. It is, however, possible that this is also a reaction of the primitivization of mass consciousness, which is typical of all authoritarian regimes, and the stifling of immanent mechanisms of innovation”, he suggests.

Back in 2007, Putin expressed concern about the presentation of Russian history in schools, with this leading to the appearance of a manual for teachers by Alexander Filippov, which described Stalin as “one of the most successful leaders of the USSR”.   It was material like this that by October that year made Putin welcome “certain positive moves”, noting that “up till quite recently we read things in textbooks that made our hair stand on end…”

Since then, there has been a general trend towards glorifying Stalin’s role in WWII, concealment or justification of the Soviet Union’s collaboration with Nazi Germany during the first almost 2 years of the War.  This resulted in the surreal prosecution of Vladimir Luzgin and the Russian Supreme Court’s September 1, 2016 effective ruling that the USSR had not invaded Poland in September 1939.  The Russian authorities have blocked access to military archives, and the State Duma has now passed a bill criminalizing any comparison of the regimes of Hitler and Stalin.

In May 2020, following controversy over frescos for the new Russian Defence Ministry Cathedral depicting, among others, Stalin, Deputy Defence Minister Andrei Kartapolov asked what they had to be ashamed of.  Stalin, he claimed, was a man who “took upon himself all the burden of the war, made the most important decisions.  Yes, and in general reinstated religion. Why should we be ashamed of him?  Because some people from abroad tell us to?  We will decide ourselves who to honour, who to portray on frescos.”

The Deputy Defence Minister’s interview was published two days before the Russian prosecutor in Tver ordered the dismantling of memorial plaques honouring the victims of Stalin’s Terror and of the Katyń Massacre, when the Soviet NKVD, on the orders of Stalin’s deputy, executed 22 thousand Polish officers and others, taken prisoner after the USSR invaded Poland on 17 September 1939 (details here).  Those memorials, like the mass graves of victims of the Terror at Sandarmokh and the Gulag museum at Perm-36, are destroyed or the facts about them distorted in Putin’s Russia with impunity. It is widely believed, both in Russia and abroad, that the imprisonment (and death in prison) of historian Sergei Koltyrin and the ongoing imprisonment and politically-motivated charges against world-renowned historian of Stalin’s Terror Yury Dmitriev are because of their work in uncovering the truth about the mass graves of victims of the Terror at Sandarmokh in Karelia.   (See: Russia reverts to worst Soviet times in reprisal sentence against historian of the Terror Yury Dmitriev ).

All of this is terrifyingly effective.  A Levada Centre poll of young people published in June 2020 found that 41% knew little or nothing about Stalin’s repression (and murder of millions).

In March 2019, the Levada Centre reported a record level of approval for Stalin.  While the number of those who spoke of ‘admiration’ for Stalin had remained stable at 4%, there had been a huge increase (from 27% in 2001 to 41% in 2019) in the numbers who ‘respected’ Stalin.  Together with the largely unchanged percentage of Russians who view the dictator ‘with liking’, this meant that 51% had a positive attitude to him.  Equally disturbing was the sharp rise in the percentage of Russians willing to justify the number of victims of the Stalin era.  This had risen from 27% in 2008 to almost half the population (46%) in 2019.  The Levada Centre noted that this was in contrast to Ukraine, where the attitude to Stalin and his role in history was becoming more negative.  In a survey carried out in February 2016, together with the Kyiv International Institute of Sociology,  a negative attitude to Stalin was found to dominate in Ukraine, with more than twice as many people having a negative than a positive attitude (38% against 17%).   Unfortunately, that trend is doubtless being reversed in occupied Crimea and Donbas.