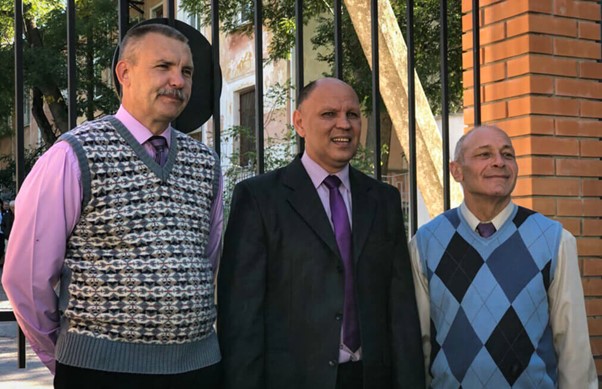 A Russian occupation ‘court’ in Sevastopol has sentenced three Jehovah’s Witnesses to six years’ imprisonment purely for practising their faith.  Volodymr Maladyka, Volodymyr Sakada and Yevhen Zhukov were clearly not expecting justice from the ‘court’, and, according to human rights defender and Graty correspondent, Lutfiye Zudiyeva, each had arrived with a packed bag in anticipation of arrest. The sentences can, and will, be appealed, but thus far almost all sentences against believers in occupied Crimea have involved long prison sentences, with all left unchanged at appeal.

The ‘trial’ and ‘sentences’ follow from Russia’s extraordinary ban on the Jehovah’s Witnesses in April 2017, and its gross violation of international law by extending such religious persecution to occupied Crimea.  While the three men were all charged with ‘organizing the activities of an extremist organization’ (Article 282.2 § 1 ), ‘judge’ Olga Berdnikova from the Russian occupation Nakhimovsky District Court in Sevastopol cannot have been in any doubt that she was imprisoning them for refusing to renounce or conceal their faith.

The charges were, after all, mainly based on Zoom recordings of four Jehovah’s Witnesses meetings, made by an FSB infiltrator, on the instruction of senior FSB investigator Dmitry Shevchenko.  During these meetings, the defendants had simply read and discussed religious literature, yet ‘prosecutor’ Valery Yazev demanded 7.5-year sentences against each of the men, as well as an additional ban on taking part in civic organizations for eight years.  Then, on 6 October, Berdnikova sentenced each man to six years in a medium security prison colony and also imposed a ban on educational activities (public addresses, material in the media or Internet) for seven years, and a further year of restricted liberty at the end of the sentence.

Several dozen people arrived at the ‘court’ for the announcement of the verdict on 6 October, with the three defendants greeted with applause as they entered.  Svitlana Sakada told Graty that people had come from many Crimean cities to show their support for her husband and the other men.  Typically, only 10 members of the public were allowed into the ‘courtroom’ with Berdnikova not permitting any photographs or video recording.  Even the information on the official ‘court’ website is minimal, with the defendants’ names, for some reason, ‘hidden’.

Berdnikova’s verdict largely parroted the indictment.  She claimed that the men’s ‘guilt’ had been proven, citing FSB officer Shevchenko who asserted that the three had continued to be members of a so-called ‘extremist organization’ after Russia’s Supreme Court came up with this label to try to justify persecution of believers.  She cited ‘secret witness’ Ivantsova whose ‘testimony’ was alleged to show that the defendants had used ‘conspiratorial methods’ after the ban.  The ‘judge’ asserted that reference by the defence to freedom of religion was no more than an “attempt to escape liability”.

As reported, there were armed searches of nine Jehovah’s Witness homes in Sevastopol on 1 October 2020, with these resulting in the arrests of four men: Volodymyr Maladyka (b. 1963); Volodymyr Sakada (b. 1970) Yevhen Zhukov (b. 1969); and Ihor Schmidt (b. 1972).  All of them were remanded in custody the following day, however, detention was, after several months, changed to house arrest.  Although he was prosecuted under the same article of Russia’s criminal code, Schmidt was ‘tried’ separately, with his ‘case’ under senior FSB ‘investigator on particularly important cases’, Sergei Bosiyev.  He was sentenced on 25 October 2021 by ‘judge’ Liudmyla Tumaikina to six years’ imprisonment.  This was upheld at appeal level on 17 January 2022.

The ‘case’ of Maladyka, Sakada and Zhukov was under FSB ‘investigator’ Aleksandr Chumakin.  As well as involvement in the first persecution of a Jehovah’s Witness in occupied Crimea (Serhiy Filatov), Chumakin has also taken part in the armed searches of peaceful, law-abiding Crimean Tatars imprisoned on grotesque charges of ‘terrorism’ because of their religious faith and, in many cases, their peaceful civic activism.

The indictment originally included Oleksandr Kostenko, but he had left occupied Crimea before the arrests.  Zudiyeva provides an excerpt from this truly surreal indictment, which asserts that:

“Zhukov, carrying out his criminal role, together with Sakada, Maladyka and Kosten as a group, acting according to prior conspiracy, deliberately, with the aim of continuing the unlawful activities of an extremist organization prohibited by a court and with the use of ZOOM video conference software, via the Internet, organized and held a religious gathering of at least 25 people.”

As always, the ‘court’ also allowed so-called ‘secret’ witnesses. There are no grounds at all for such anonymous ‘witnesses’, whose testimony cannot be verified.

The prosecution also claimed as ‘evidence’ copies of the New Testament and of ‘The Bible for the Very Young’ which had been removed during the searches.  This is despite the fact that, as Sakada noted in ‘court’, no publication of the Bible is [yet] on Russia’s list of so-called ‘extremist literature’].

At the beginning of the ‘court debate’, Valery Yazev demanded 7.5-year sentences, claiming that the defendants had “committed a grave crime against the constitutional order and the security of the state”.

Berdnikova found it possible to ignore the sheer absurdity of such claims, as she had the fact that the indictment ‘accused’ the men of entering into a ‘conspiracy’ in 2015, before the ban was imposed, and numerous other discrepancies.

In addressing the ‘court’, Yevhen Zhukov stated that “the right to practise one’s religion is enshrined in the Constitution. The Supreme Court in no way restricts that. I had and continue to have only one aim: to remain a Christian.”

The account is not up to date, as new armed searches were carried out on 28 September with at least one believer, 50-year-old Serhiy Parfenovych remanded in custody.