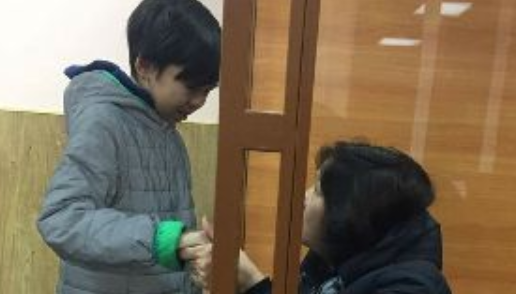 It was fear of reprisals for her criticism of the regime of Nursultan Nazarbayev that prompted Akhmet in March 2017 to come to Ukraine, together with her (now) 10-year-old son Ansar and apply for asylum.

Her difficulties and son’s trauma began on 21 October 2017  when two men in plain clothes turned up at their flat, claiming to be police officers.  They said that she was wanted for fraud in Kazakhstan and that they were therefore taking her away in connection with an extradition request.

She later asserted that the men who turned up at her home had lied in saying that she was being detained in accordance with an Interpol Red Notice.  It was only around six hours later, after midnight, that confirmation was sent from the Kazakhstan Interpol.

Akhmet accuses one of the two men of having used physical force to try to take her mobile phone off her, and says that the lawyer has recorded the bruises this caused.

During a court hearing on extradition arrest on 24 October, the prosecutor produced a decision from Ukraine’s Migration Service rejecting her application for asylum.  This was dated 18 October 2017, though neither she nor her lawyer had been informed of it.

Although all Interpol member states are obliged to take Red Notices into account, by no means all detain a person If a court deems the charges to be flimsy or politically motivated, or if there are no grounds for detention.  In Ukraine, unfortunately, detention pending a decision on extradition is the norm, and on October 24, the Kyiv—Svyatoshynsk Court ruled that the 48-year-old journalist and solo mother should be remanded in custody for 18 days. The 18 day period is at least in accordance with European recommendations, unlike the 40-day detention demanded by prosecutor Yulia Savostina.

On November 2, an application by MP Svitlana Zalishchuk and the Executive Director of the Ukrainian Helsinki Human Rights Union Oleksandr Pavlichenko for Akhmet to be released on their guarantee was rejected, and the prosecutor’s demand for the full period of extradition arrest allowed.

There were distressing scenes in court with Akhmet’s son trying to hug his mother through the glass box that she was held in.  Zalishchuk expressed the outrage shared by many, pointing out that Akhmet had faced fines in Kazakhstan merely for posts on Facebook, as well as a security service protocol drawn up over allegedly jaywalking. She warned that “Ukraine risks getting the reputation of a country that arrests and extradites well-known opposition figures from authoritarian countries that are friends with [Russian President Vladimir] Putin.”’

Nonetheless, on 6 April the same court rejected Akhmet’s suit against the Migration Service for refusing her refugee status.

Akhmet told Detektor Media that the court hearing had lasted over two hours, during which, in her view, they provided ample proof that she faced political persecution in Kazakhstan.  The court took 10 minutes to reject this, asserting that the reason why she had left Kazakhstan was not political and there were no threats.

An appeal against this baffling ruling has been lodged.

Zhanara Akhmet is one of three journalists – together with Uzbekistan journalist and poet Narzullo Akhunjonov and Azerbaijani journalist Fikret Huseynli, whose cases have most prominently highlighted severe failings in Ukraine’s extradition procedure and asylum system.  In each case, the prosecutor has fought hard to have them held in detention, despite Akhunjonov’s serious health issues, Akhmet’s young child and the fact that Huseynli has Dutch citizenship and could not, in any circumstances, be extradited to Azerbaijan.  Huseynli has now returned to the Netherlands but only after a shamefully long period during which he lived in fear of abduction while forced to remain in Kyiv.  Even after the extradition application was finally rejected, it still took the prosecutor around two weeks to return his passport.

Both Akhunjonov and Akhmet are at liberty, but are still forced to grapple with Ukraine’s unreformed system despite clear grounds in both cases for believing that they would be in danger if forcibly returned to their country of origin.