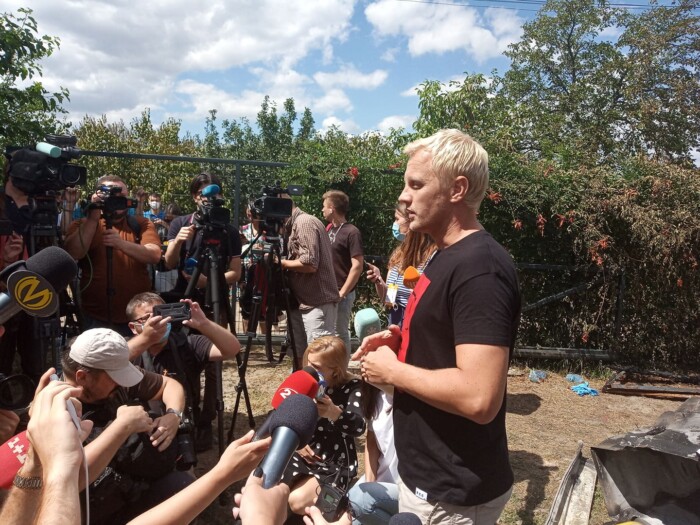 Vitaly Shabunin, Head of the Anti-Corruption Action Centre (AntAC) and fellow anti-corruption activists are convinced that the fire which gutted his home during the early hours of 23 July was set deliberately.  A neighbour has reported hearing an explosion before the building was engulfed in flames, and Shabunin says that the gas pipes and installations were checked two weeks ago.  Nobody was injured since the activist himself and his children were not in the house, and his parents were able to get out, however any arson attack could obviously have had tragic consequences.  This would not be the first attack on Shabunin, but it would certainly be the most serious. At present the police and experts are investigating and do seem to think the fire was set deliberately.

A statement endorsed by a number of Ukrainian NGOs spoke of Shabunin and other members of AntAC having “been subjected to systematic harassment in recent years, including physical assault, fabricated criminal cases, and smear campaigns.”

The examples cited certainly aroused concern and criticism at the time. In March 2016, the Prosecutor General’s Office obtained a warrant (issued by the Pechersky District Court in Kyiv) allowing its investigators to remove documents and other items from AntAC, and also to demand access to confidential information from its  bank.  All of this was supposed to be part of an investigation into the disappearance of money donated by US and European partners for reforming the prosecutor’s service.  Shabunin then condemned the move as pressure on his organization, a view that was, in fact, fairly widely shared, and resulted in accusations, including from Ukraine’s international partners, of attempts to put pressure on an NGO fighting corruption.

Shabunin himself also faced very dubious criminal proceedings over an incident involving a notorious provocateur called Vsevolod Filimonenko on 8 June 2017. Shabunin had been summoned, without any justification, to the military recruitment office, where Filimonenko was waiting for him with a cameraman.  It is not in dispute that Shabunin punched Filimonenko, however  there have been many far more serious attacks on bloggers, journalists and activists that received little or no attention from the enforcement bodies, whereas here Filimonenko’s claims about the incident were taken at face value, and the fact that he had attacked Shabunin with a gas cannister ignored. (details here).

It is generally hard to get the prosecutor’s office to initiate criminal investigations over obstruction of journalists in their work, however criminal proceedings  over such alleged obstruction were also initiated in February 2018 against one of Shabunin’s colleagues on the Board of AntAC, Oleksandra Ustinova.

While an attack on somebody as prominent as Shabunin could not go unnoticed, and has already elicited reaction from, for example, the EU’s office in Ukraine, others have received worryingly little attention. There remains obstruction to this day of the trial of the believed killers of Cherkasy journalist and Maidan activist Vasyl Serhiyenko, with the reason very likely linked with the person suspected of having ordered the attack.

There has seemingly been no progress at all in the finding the killers of Cherkasy journalist Vadimir Komarov, who was known for writing hard-hitting investigative reports about local corruption, embezzlement of public funding, organized crime, etc.

If nobody has disputed that the journalists were savagely murdered, the same cannot be seen for the unexplained – and suspicious – death in June 2018 of 23-year-old Mykola Bychko, a Kharkiv oblast environmental activist.  Other activists believe that his death was probably linked with his fight against corruption and the pollution of a local reservoir, run by a company linked to the then Mayor of his city (Eskhar).

See:  Nobody believes Ukrainian environmental activist’s death was suicide, so why was the investigation terminated?

One of the activists who publicly called Bychko’s death murder was Roman Likhachov.  The frightening death threats which he received in August 2019 have also not been properly investigated.