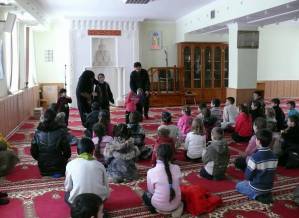 Said Ismagilov, Mufti of the Muslims of Ukraine, reports that Thursday’s armed search on the Islamic Cultural Centre Mosque in Simferopol was the third such raid by the FSB and the second time that so-called prohibited literature was planted.

Armed searches of Muslim schools and mosques began within around 6 months of Russia’s annexation of Crimea, with machine guns apparently required to search for books included on Russia’s huge ‘Federal List of Prohibited Extremist Literature’.

Back in August and September 2014,  Aider Ismailov, Deputy Mufti of the Muslims of Crimea, pointed out that there was no list of prohibited literature in Ukraine.  Some of the material on the list is from various Muslim movements, such as Hizb ut-Takhrir which is legal in Ukraine and other countries but which Russia has decided is ‘terrorist’   This has resulted in four Crimean Tatars being held in detention already and facing long sentences purely for being members of Hizb ut-Takhrir (see: Muslims labelled ‘terrorists’ under Russian occupation).  Ismailov pointed out then that there are also a number of books by well-known and generally-accepted Muslim scholars.

During another armed search of the madrasa, or religious school, linked to the Strogonov Mosque, for example, the book ‘Fortress of a Muslim’ had been found.  Hardly surprising since at the time every second Muslim in Crimea owned a copy.

The Spiritual Directorate of Muslims of Crimea responded by issuing a list of all relevant items from the Russian list and ensuring that this was widely circulated.

Under the current occupation regime in Crimea, it is most unlikely that any mosque would be holding material from the list.

Said Ismagilov writes that during the previous search, ‘prohibited literature’ was ‘found’ with this enabling the authorities to initiate administrative proceedings.  After that occasion, the imam was forced to check every corner of the mosque to ensure that no other prohibited books had been planted. He is adamant, and Said Ismagilov believes him, that there was no such material when the mosque had been locked the previous evening.

Two books were mysteriously ‘found’ by the FSB (one “the Fortress of a Muslim”) and Said Ismagilov believes it likely that plans are afoot to pin something on the mosque’s imam or the Islamic Cultural Centre.

Russia has increasingly used its excessively broad legislation on ‘extremism’ as a means of repression.  The new searches (and there are as yet unconfirmed reports of others as well) come on the first anniversary of the arrest of Akthem Chiygoz, Deputy Head of the Crimean Tatar Mejlis.  This was part of a concentrated attack on the Mejlis (or Crimea Tatar representative assembly) which in October 2015 Russia’s Civic Chamber suggested should be checked for so-called ‘extremism’.  That move followed a similar, but more vague, threat  made a month ago  and ‘advice’ to the Crimean media not to mention it at all.   It also followed quite extraordinary claims that Crimean Tatar leaders are recruiting Crimean Tatars to become Islamic State fighters.

A new study from the National Minority Rights Monitoring Group entitled Two Years of War: Xenophobia in Ukraine 2015 reported a dangerous increase in xenophobia only in Russian-occupied Crimea (details in English here).