A Window to Europe for Crimean Tatars 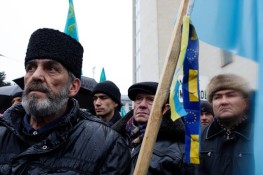 On February 4, the European Parliament adopted with an overwhelming majority a resolution on the human rights situation in Crimea. While international news media mostly picked up from it the (non-binding) suggestion to link the lifting of EU sanctions on Russia to the restoration of Ukrainian control over Crimea, the resolution included something potentially even more significant and far-reaching. Oliver Loode, MRG’s Head of Cultural Programmes, and member of UN Permanent Forum on Indigenous Issues, analyses the EU’s move.

It was the first time that a major international democratic body explicitly acknowledged Crimean Tatars as ’indigenous people of Crimea’. As such, the EU effectively paved the way for Crimean Tatars’ eventual full exercise of their individual and collective human rights as stated in the UN Declaration on Rights of Indigenous Peoples (UNDRIP), including the right to self-determination. The importance of the resolution becomes obvious in light of the historical context around the issue of Crimean Tatars as indigenous people – a notion that until recently was contested even by Crimean Tatars’ home country Ukraine.

Since 1994, Crimean Tatars participated in the work at the United Nations that led to the adoption of UNDRIP in 2007, have attended annual sessions of the United Nations Permanent Forum on Indigenous Issues (UNPFII), and much more. As a result, the international community of indigenous peoples has embraced Crimean Tatars as one of their own – as brothers and sisters.

However, convincing their home government of Ukraine of their indigenous status has proved more challenging, all the way until Crimea’s illegal annexation by Russia in March 2014. For a number of reasons, post-Soviet Ukraine did not acknowledge Crimean Tatars as indigenous people, even during the relatively liberal and pro-European years following the Orange Revolution of 2004. Nor did Ukraine endorse UNDRIP, most likely in order to avoid imaginary trouble with Crimean Tatars. What exactly the Ukrainian establishment was afraid of remains unclear, but it is widely known that for the most part of its existence, post-Soviet Ukraine viewed Crimean Tatars  with suspicion and mistrust, as if they were a real or potential public enemy.

What a historical misjudgement this was! As became evident from the first days of Crimea’s illegal occupation by Russia in February 2014, Crimean Tatars were the only group in Crimea resisting the ’little green men’, boycotting the fake ’referendum’ and the last ones to fly Ukrainian flags until they were taken down by the thugs backed by occupying authorities. During those days, Crimean Tatars proved to be even greater patriots of Ukraine than the country’s own government, who passively looked on while a piece of their country was being bitten off by a hostile neighbour.

These developments clearly annoyed Russia, the new occupying power in Crimea. A year after the annexation, Russia issued a call to its academic institutions and think-tanks to undertake a study analyzing the current state of Crimean Tatars, including the basis of their claim as indigenous people. The real meaning of this call was obvious: to start building a narrative delegitimizing Crimean Tatars’ claim as indigenous people with collective rights.  At the same time,  human rights violations targeting Crimean Tatars and their institutions, including disappearances and acts of vandalism, began soaring and continue to this day, showing no signs of slowing down.

As a result, Crimean Tatars have faced two competing views about their status: 1) one of several of Crimea’s ethnic minorities with no collective rights – as promulgated by Russia, and 2) indigenous people as understood by international human rights law and norms (including UNDRIP) as seen by Crimean Tatars themselves and, since 2014, Ukraine. Yet again, this has been a clash between Russia and Ukraine, with some support from friendly European countries and the global indigenous peoples’ movement.

It is in this context that the European Parliament resolution acquires its significance. By explicitly stating that Crimean Tatars are indigenous people of Crimea – not once but three times – the European Parliament made an important step towards building a global consensus on the status of Crimean Tatars under international human rights law. Given that almost all EU member states have endorsed UNDRIP, the resolution essentially stated that Crimean Tatars have the right to self-determination, as well as all other rights as listed in the Declaration.

In my view, this resolution is not simply an observation of a bystander. Given that Ukraine is on the path to European integration – even if the path is bumpier and longer than expected by many – it is still reasonable to think of the EU as future home of Ukraine and its people. As such, this European Parliament resolution recognized Crimean Tatars as not only indigenous people of Crimea and Ukraine, but also of a future European Union.

Whether and when this future will be fully realised depends on bigger and more powerful forces. Personally, I am confident that Crimean Tatars will play a role in the chain of events leading to the eventual return of Crimea to Ukraine. I base this confidence on the remarkable resilience and resolve that Crimean Tatars have shown throughout history, as well as personal observations from working with Crimean Tatar leaders and activists. Knowing that the European Union is clearly on their side and acknowledging what Crimean Tatars have been saying for several decades, should motivate Crimean Tatars to peacefully resist this occupation even more. For that alone, the European Parliament, and especially its 472 members who voted for this resolution, deserve to be praised.

Photo: Crimean Tatar activists at a pro-European rally in Kiev in 2014

To get in touch with Oliver – [email protected]