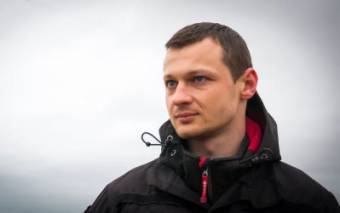 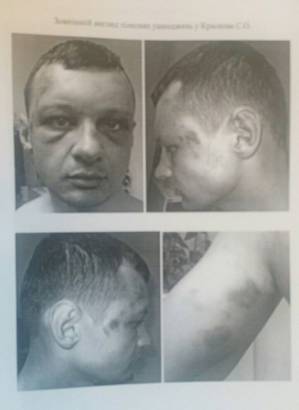 UPDATE:   Since the report below was written, photos have been released (see above right)  which give very strong grounds for believing Stanislav Krasnov’s allegations of torture.  Human Rights Ombudsperson Valeria Lutkovska has demanded that the Prosecutor General order an investigation.

Ukraine’s SBU [Security Service] have arrested Stanislav Krasnov, a close friend of Crimean political prisoner Oleksandr Kostenko and himself wanted on politically motivated charges in Russian-occupied Crimea.  The SBU accuse the former commander of the volunteer Krym Battalion and now leader of the Azov Crimea Civic Corps of spying for Russia’s FSB.

The allegations are at very least startling.  Krasnov is known not only for his role in the Krym Battalion until its dissolution in the Spring of 2015, but for many public appearances in the media.  These have sometimes been over Russia’s attempts to prosecute him, and harassment of his mother, but there has also been strong criticism of Ukraine’s government.  In September 2015, for example, Krasnov announced that he was lodging an application against both Russia, as occupier, and Ukraine with the European Court of Human Rights.  He accused the Ukrainian authorities of “facilitating the occupation of both Crimea and Donbas”.  Krasnov’s Azov colleagues, including MP Andriy Biletsky, have rejected the accusations and, after a first demonstration outside SBU on Sunday, are promising further protests.

At a press briefing on Monday, SBU representative Oleksandr Tkachuk reported the arrest last Saturday night of Krasnov and Oksana Shelest.  He said that Krasnov had been transferring grenades and explosive devices equivalent to 42 kilograms of trotyl from one hiding place to another near a petrol station in the Kyiv oblast.

Tkachuk mentioned at least twice that Krasnov had shown resistance and that force had been used to detain him.  Krasnov asserts that he and his girlfriend were seized near the petrol station, she was beaten and he – beaten and tortured.

The SBU accuse Krasnov of having planned an attempt on the life of one of the leaders of the Crimean Blockade.  This was allegedly on the instructions of Russia’s FSB who “were planning to use this to destabilize the situation in the region”.

It alleges that Krasnov leaked a list of all members of the Azov Regiment to Russia, and that he had earlier in February been in Belarus where, SBU claims, he met with the FSB officer in charge of his actions.  SBU asserts that this contact began back in 2014 and that he has been to Belarus for the same purpose many times.  On this last visit, he is alleged to have discussed the possible use of the above-mentioned explosives.  Tkachuk says that they know the name of the Russian and will reveal it as soon as the investigators give permission.  Despite presentation of such serious accusations, Krasnov has only been charged at present with illegal possession of weapons.

At the briefing, Tkachuk showed photos of the explosives allegedly found, as well as a recording from a video register without either date on it or time.  This has three voices, one a woman’s, discussing the transportation of a bag weighing around 40 kilograms and containing something that looks like plastid.

Tkachuk asserts that their operational information has been “verified”.  Oleksandr Alferov from the Azov Civic Corps has, however, told the Radio Svoboda Crimean Service that the list of fighters was stolen by hackers in 2015 and that the names of around 600 fighters from the Azov Regiment (by then part of the Interior Ministry’s National Guard) were posted on a Donbas militant website in March – April 2015.   Alferov says that Krasnov had no access to the staffing service and he can’t imagine why the SBU is trying to pin the disappearance of the data on him.

As mentioned, Krasnov asserts that he was held outside and subjected to beating and torture for around 7 hours.  He says that he lay in the dirt and mud in sub-zero conditions, and periodically lost consciousness.  “They didn’t ask any questions about any crimes, just said that they would kill me, that because of our Maidan they had only problems, that all volunteers, in particular the OUN [Organization of Ukrainian Nationalists] Battalion are thieves and looters, that they didn’t fight, and that they should all be eliminated”.   He says he was then taken to the SBU where they continued to beat and torture him until a lawyer arrived.

Krasnov asserts that all of this is part of repressive measures against volunteers and Maidan supporters and that a direct commission from Russia to remove him is being carried out.

Krasnov, together with Oleksandr Kostenko, first attracted public attention in September 2013.  The two Crimean police officers  publicly stated that the Simferopol police management were putting pressure on them and trying to cover up the abduction and sale into sexual slavery in Moscow of two Crimean women.

Both men were driven out of the police force and it seems likely that this incident contributed to the choice of Kostenko as target for a politically motivated prosecution.  Kostenko and Krasnov were both active supporters of Euromaidan in Kyiv, and the main charge brought against Kostenko in Feb – March 2015 pertained to an alleged incident on Maidan on Feb 18, 2014.   This was before Russia invaded Crimea and unequivocally on Ukrainian territory and under Ukrainian law, yet Kostenko was sentenced on that charge and another, no less fabricated, to 4.2 years imprisonment.  This has just been reduced to 3.5 years, yet the court upheld the legally nihilistic charges and also ignored compelling evidence of the use of severe torture (see: Crimean Maidan activist’s insane conviction upheld, sentence reduced).

Worth noting that Kostenko’s lawyer Dmitry Sotnikov has reported that during this extraordinary trial, Natalya Poklonskaya, installed as prosecutor by the occupation authorities, claimed that Kostenko and Krasnov had tortured ‘Berkut’ officers and burned their bodies in a crematorium established in the basement of the Kyiv City Administration (occupied at that time by some Euromaidan activists).  No proof was provided.

Kostenko was sentenced in May 2015.  Then in June 2015 Russia’s Investigative Committee initiated criminal proceedings against Krasnov, accusing him of “inciting enmity or hatred towards people of a certain social group, with the use of the media” (article 282 § 1 of the Russian criminal code). He was supposed to have made public statements on two TV channels from April 2014 to Jan 2015  which ‘incited enmity’ towards former Ukrainian citizens who had expressed the wish to take on Russian citizenship.  Since Krasnov was at the time out of reach, fighting Kremlin-backed militants in Donbas, the de facto authorities harassed his mother (details here).

Russia has reportedly initiated four criminal prosecutions against Krasnov so far.  Now Ukraine is charging him with having been a Russian FSB officer since 2014.