The Show Trial Must Go On 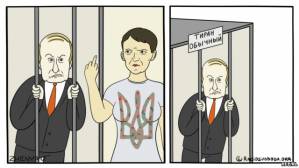 Flipping the bird at a kangaroo court

The actors change, but the stage always looks the same.

The wood-paneled courtroom. The officious judge robed in black. The stern prosecutor. That creepy cage for the accused and the stone-faced cops guarding it. And the defendant in the dock -- sometimes somber, sometimes defiant.

The script changes, but it always follows the same template: Patently ridiculous charges are presented and debated as if they were actually plausible, followed by the faux suspense of a verdict that everybody knows is a foregone conclusion.

It’s a game of pretend that has long been a legitimation ritual for Vladimir Putin’s regime -- and it has disrupted and ruined many lives in the process.

In fact, the spectacle of the show trial has been an ongoing set piece, a trademark of Putin’s rule, virtually from day one.

And in 2013, whistleblower Sergei Magnitsky became -- to my knowledge -- the first dead man subjected to a Russian show trial.

And in this peculiarly Russian form of performance art, courts aren’t bound by the normal rules of reality and logic.

Russian show trials have convicted Khodorkovsky of stealing oil from himself, Navalny of embezzling money without making a profit, and found Sutyagin guilty of espionage for passing "state secrets" to foreign colleagues that came from newspapers.

And later this month, a court in the Rostov Oblast is widely expected to convict Savchenko of killing two Russian journalists in the Donbas -- even though they were killed after she had already been abducted by pro-Moscow separatists.

Each show trial has had its own unique purpose.

The prosecution of Sutyagin, who was Putin’s first show-trial victim, appeared to be a signal that the security services were back in charge, as well as a message to academics to be careful about contacts with foreigners.

The Khodorkovsky case was designed to establish Putin’s bona fides as a leader who was not afraid of the oligarchs and to send a message to leading tycoons to stay out of politics.

It also had the added benefit of allowing Putin crony Igor Sechin to seize the assets of Khodorkovsky’s Yukos oil company.

The Pussy Riot case established the zeitgeist of Putin’s third term, an anticosmopolitan conservatism that played to Russia’s working classes and rural poor.

And the prosecutions of Navalny and the Bolotnaya Square protesters showed that the Kremlin was prepared to get rough with the opposition.

But while show-trial victims are invariably convicted, the carefully calibrated sentences vary.

The fact that Navalny has avoided prison despite two convictions shows that the Kremlin metes out only as much punishment as it believes it can get away with -- no more and no less.

But as Peter Pomerantsev, author of the book Nothing Is True And Everything Is Possible: Inside The Surreal Heart Of The New Russia, notes, the overarching purpose of the whole exercise -- from Sutyagin to Savchenko -- is the same: to show that the Kremlin "has full control of the script" and is the master of reality.

"This absurdity appears to be deliberate, " Pomerantsev wrote in a 2013 report for the Legatum Institute. "It proves to the public that the Kremlin can re-imagine reality at will, can say ‘black is white’ and ‘white is black’ with no one able to contradict."

And given this, Savchenko’s defiant gesture -- giving the judge and the court the middle finger during her closing statement -- was such anappropriate response to the whole outrageous show.

In fact, it may be the only appropriate response.

(Thanks to RFE/RL editor Steve Gutterman for his helpful input and contribution to this post.)