Savchenko: You haven’t broken me & you won’t. I am no object for bargaining 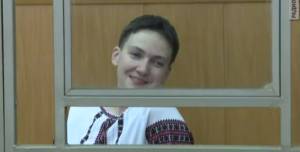 Nadiya Savchenko has threatened to go on a dry hunger strike, refusing even water if sentence is not passed soon.  The Russian prosecutors have demanded a 23-year sentence for the former military pilot captured by Kremlin-backed militants in eastern Ukraine and taken by force to Russia.  Incredibly, they also asked for a fine of 100 thousand roubles (over €1200) for supposedly “illegally crossing the border into Russia”.

The three prosecutors, one of whom - Pavel Filipchuk – has a formidable record of politically motivated trials, claimed on Thursday that Nadiya Savchenko’s ‘guilt’ had been fully proven.

Savchenko is a Ukrainian MP and delegate to the Parliamentary Assembly of the Council of Europe [PACE].  Her release has been demanded by the EU, European Parliament, PACE and all democratic countries, many of whose representatives may well be present in the courtroom.  She and all other illegally held persons must be freed in accordance with the Minsk Agreement, as has been repeatedly stressed.

The trial is taking place in the Rostov oblast small city of Donetsk.  This location was doubtless chosen to minimize media and diplomat attendance at the hearings, and also to place defence witnesses at threat since the area borders on those under Kremlin-armed and funded militant control.

Russia’s Constitutional Court has in the last week found it unconstitutional for women facing long sentences to be denied trial by jury, with this unfortunately too late to affect the trial of Nadiya Savchenko.  There is a panel of three judges: presiding judge Leonid Stepanenko; Ali Khaibulayev and Yevgeny Chernysh.  As well as Filpchuk, prosecutors Vladislav Kuznetsov and Dmitry Yunoshev are taking part in the proceedings.

Their names should certainly be remembered as the trial has often toppled into open farce, with Stepanenko blocking evidence proving Savchenko’s alibi, etc.  while allowing witnesses to give totally secret testimony, appear in disguise, etc.  There have also been open attempts to falsify evidence.

Grani.ru reports that Savchenko responded to Kuznetsov’s demand for such a long sentence by yawning.

The defence then took the floor, with Savchenko beginning her address (it can be heard, in Russian, here

During her speech, Savchenko listed what had been proven during the six months of court hearings.   The Russian journalist Igor Kornelyuk and cameraman Anton Voloshin were “guilty of having disregarded safety rules”.  In fact, as she went on to say, the guilt was almost certainly with the television channels and their management who sent journalists to their death “for a good picture and disinformation”.

The separatists and Russian soldiers are guilty in killing the Ukrainian people on our Ukrainian land, and in occupying that land.

The FSB and Investigative Committee are guilty of abducting people, torturing them and fabricating cases against them. She mentions the four men including filmmaker Oleg Sentsov, Mykola Karpyuk and Stanislav Klykh, although the list can certainly be extended.

Over the last 2 years she has understood that prosecutors and Russian courts have no honour or conscience, and no concern about obeying the law.  All they care about is the order from the Kremlin which they need to fulfil.  In this trial, the guilt was proven on the Russian authorities – they are guilty of having seized Crimea, of unleashing the conflict in Donbas. They appear everywhere, and use genocide against the people in Chechnya, in Abkhazia.  Everywhere the interests of the Russian state prevail over the interests of the population.

This trial has failed to prove only any guilt on my part.  I am an officer in the Ukrainian Army and I had the right to defend my land.  You have no right to try me.

You haven’t broken me and you won’t.  let’s finish this all in the shortest time possible. I won’t wait any longer.   It is not you who gave me life, not you who own my fate and it’s not for you to decide.  If it’s more than two weeks, I will not wait for the sentence.

Nadiya Savchenko has been on hunger strike since mid-December, and has long threatened to refuse even water after the sentence.  She has now clearly decided that they are deliberately dragging the scandalous trial out.

The defence’s presentation is expecting to continue into Thursday, after which Stepanenko will inform when the sentence is to be announced.

Nadiya Savchenko is apparently adamant that she will not appeal against the sentence which nobody realistically expects to be much less than that ‘demanded’ by the prosecution.  This is extremely worrying since the European Court of Human Rights [ECHR] demands that applicants have exhausted all legal avenues.  The case may be internationally recognized as politically motivated, but it is important that this is exposed through an ECHR judgement.

Nadiya Savchenko is charged with complicity in the death of two Russian journalists who were killed in mortar fire on June 17, 2014.   There is no evidence at all that Igor Kornelyuk and Anton Voloshin were deliberately targeted and they were in an area of heavy fighting, without even bulletproof vests.

The prosecution claims that Savchenko climbed up a television tower and, at a distance of around 2.5 kilometres noticed the journalists and informed members of the Aidar volunteer battalion of their location.  Neither the binoculars nor the radio system that the prosecution alleges were used to do this have been produced.  The television tower would be difficult for most, if not all, of us to climb in normal circumstances, and Savchenko had an injured right arm

The prosecution claimed that this ‘witness’ -  Mikhail Pomazan – was an employee of the Life mobile operator.  The defence investigated and were informed by the company that they had never had an employee of that name.  The lawyers therefore demanded that ‘Pomazan’ be summoned for cross examination.  Despite the obvious validity of such an application,  the judge rejected it, refused to add the letters the defence received to the file, and the written testimony was simply read out.   There have been numerous such occasions.