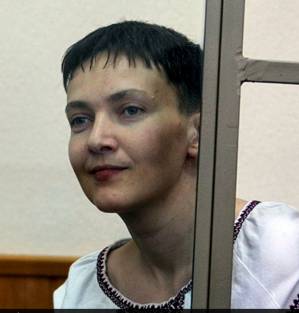 Nadiya Savchenko has agreed to end her hunger strike, the day after the sentencing of two Russian military intelligence officers caught fighting in the Luhansk oblast and a telephone conversation between Presidents Petro Poroshenko and Vladimir Putin.  Since Savchenko also wrote an application for extradition procedure to be commenced, it seems likely that some kind of deal has been discussed on the basis of the bilateral agreement on returning prisoners.  Russia announced recently that it had begun such procedure over applications to return three of the four Crimean opponents of Russian annexation imprisoned in Russia on ‘terrorism’ charges – Oleg Sentsov, Oleksandr Kolchenko and Gennady Afanasyev, as well as Yury Soloshenko, the 73-year-old pensioner from Poltava.  The fourth Crimean Oleksiy Chirniy and his family did not fill in the application.  It is unclear why Valentin Vyhivsky is not included in this list.

Poroshenko’s website also reported that the President had held a meeting on April 19 with Nadiya’s mother and sister.  It is understood that Poroshenko asked Savchenko to give up the dry hunger strike she had been on since April 6, and presumably this was reiterated by her mother who had long been unable to speak with Nadiya.

Poroshenko said on April 19 that the sentencings open up "certain opportunities for using the exchange mechanism."

Nadiya Savchenko was sentenced to 22 years on charges of complicity in the death of two Russian journalists who were killed in mortar fire on June 17, 2014.   There is no evidence at all that Igor Kornelyuk and Anton Voloshin were deliberately targeted.  They had not been provided by the State-controlled Pyervy Kanal with bulletproof vests, etc. and were in an area where fierce fighting was taking place between Kremlin-backed militants and Ukrainian soldiers.

The prosecution claimed, and a puppet court accepted, that Savchenko climbed up a television tower and, at a distance of around 2.5 kilometres noticed the journalists and informed members of the Aidar volunteer battalion of their location.  Neither the binoculars nor the radio system that the prosecution alleges were used to do this have been produced.  There is no explanation as to how Savchenko, who had a serious arm injury, could have climbed the tower.

Although the new developments are linked with the sentence passed on the two military intelligence officers, there is no equivalence in the two situations – neither in the nature of the charges, nor in the type of trial received – see Russian spetsnaz officers caught in Ukraine sentenced to 14 years.