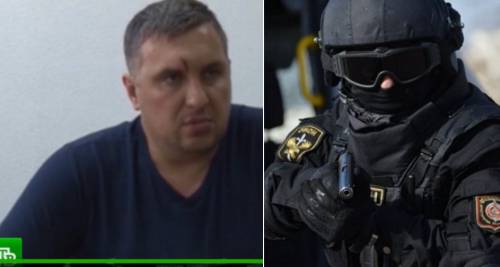 The threatened Russian ‘response’ to alleged ‘attacks’ by Ukraine on Russian-occupied Crimea has not included answers to very basic questions, with the Russians supposedly killed remaining unnamed, together with almost all the alleged ’saboteurs’. The OSCE monitoring mission has confirmed that they are unaware of any hard evidence for such attacks.  This is hardly surprisingly, since none at all has been provided. Specific answers are urgently required, because of the uses Russia is already making of its supposed anti-terrorist alert and because once again the entire ‘story’ is being substantiated by one imprisoned Ukrainian – Yevhen Panov - whose relatives assert he was abducted, and who looks as though he has been beaten.  In a format Russia has used since 2014, Panov has now ’confessed’ on state-controlled Russian TV.

In another typical development now unfolding, the heavily armed men purportedly searching for ‘terrorists’ have stopped and detained Crimean Tatar activists heading for the trial of Crimean Tatar leader Akhtem Chiygoz.  If, as per Russia’s narrative, it is looking for ‘saboteurs’ and ‘terrorists’, why was a group of Crimean Tatars detained, with the home of at least one of them, Refat Mazalov, now being searched?  Information at present is limited, in part due to a crackdown on information sources which preceded the alleged ‘attacks’, but a new wave of armed searches and arrests had seemed likely from the outset.

On Thursday a video produced by the FSB was shown widely on state-controlled Russian media.  Panov is seen ‘confessing’ to working for Ukrainian military intelligence.

Panov says that he served in Donbas for a year from August 2014 to August 2015.  Asked by the interrogator who is not visible what connection he has with the Ukrainian Military Intelligence [HUR], he answers that he was “invited to Kyiv and told that a group was being formed for acts of sabotage in Crimea. He then recites who is in this alleged group, saying that these are Ukrainian military intelligence officers.  He lists:  Oleksandr Kyrillov [nom de guerre Kyrill]; another officer he calls Dmitry; Oleh Petrenko [Lis]; Oleksy Sambul [Sai], as well as somebody with the nom de guerre Deshik.  He gives the name that he was earlier reported as having used in his military service [Eugene] for himself, and says that the commanding officer was called Volodymyr Serdyuk. They had supposedly earlier been on a trip to Crimea to decide on targets for the acts of sabotage and had chosen the ferry crossing, an oil handling terminal, a helicopter regiment and chemical factory.  Later they had hidden ammunition, etc. in a hiding place.  He mentions also that he was paid money for this.

One of the key messages intended from the interrogation is clearly that the operation was organized by Ukraine’s military intelligence and that most of the members were HUR officers.

The only other video footage provided is of weapons allegedly found, which could be from anywhere.

The Russian Foreign Ministry later named a second person detained as Andrei Romanovich Zakhtei, and asserted that he too had ‘confessed’.  Google searches suggest that this may be a Russian national from Yevpatoria, but effectively nothing more is known.

All of which seems remarkably poor for 3-4 days of intensive investigation, and such a large number of alleged ‘saboteurs’.  The FSB, which certainly monitors social networks, might have profitably spent its time checking for reports that give the lie to its ‘Ukrainian attack’ story.  An Aug 8 post, for example, from Edward Zhuravlev, an adviser to Sergei Menyailo, formerly the de facto governor of Sevastopol, does not question that shooting took place, but suggests that it was caused by drunken Russian soldiers.

On Thursday morning, the Crimean Human Rights Group announced that they were lodging a formal complaint with Ukraine’s Prosecutor for Crimea over the illegal deprivation of Panov’s liberty and the clear signs that he had been beaten.

Relatives of Panov, including his brother, are adamant that Panov would not under any circumstances have, as a former soldier, risked going to Russian-occupied Crimea.  In a separate interview, he noted also that Russia’s annexation of Crimea was distressing for him and on principle he would not have gone there.   His family remain convinced that he has been abducted.

There is quite literally nothing to back the assertions about two ‘attempted incursions’ during the night from 7-8 August and the mass shelling from Ukrainian territory, first asserted by the FSB and then repeated by the Foreign Ministry. It is then, after all, that the death of the unnamed Russian soldier is supposed to have occurred.

It is unclear whether Russia’s President Vladimir Putin is really planning a major escalation in Russia’s aggression, either in Donbas or from Crimea.  He may simply want to kill the Minsk Agreement which Russia has never complied with at all.

It is doubtless useful as socio-economic woes increase, both in occupied Crimea and in Russia for the Kremlin to play such a ‘Ukrainian terrorism’ card.  It may also provide a useful way of distracting attention from Moscow’s new friendly relations with Turkey after the same sabre-rattling and threats after Turkey downed a Russian jet.

It is a depressingly easy card to play while Russia occupies Crimea and continues refusing to following generally accepted rules.

There is no evidence of the attacks alleged, but a man can be shown confessing on state television.  This format was first used back in late May 2014, following the arrests and torture of Ukrainian filmmaker Oleg Sentsov, civic activist Oleksandr Kolchenko and two other Ukrainians who opposed Russia’s annexation of Crimea.  The FSB made equally grandiose allegations which were then repeated as ‘confessions’ by the other two men arrested and broadcast by pro-Kremlin media.  Most of the alleged terrorist acts had been shelved by the trial of Sentsov and Kolchenko and no evidence was provided. Despite that, and the fact that Gennady Afanasyev stood up in court and clearly retracted all testimony as having been tortured out of him, Sentsov was sentenced to 20 years, Kolchenko to 10.

It is now two years since Serhiy Lytvynov was abducted and tortured into ‘confessing’ to hideous war crimes that never happened.  He remains in Russian captivity despite the fact that Russia was forced to withdraw the charges after they were proven to be fictitious.  Most of the Ukrainian prisoners still held in Russia are believed to have been subjected to the same torture.

The West has noticed those cases, but largely ignores the ever increasing number of Ukrainians in Crimea detained or convicted on extraordinary charges.  These include Oleksandr Kostenko and Andriy Kolomiyets who were both convicted of unproven events in Kyiv during Euromaidan.  The same contempt for fundamental principles of jurisdiction is seen in the ongoing trials of Crimean Tatar leader Akhtem Chiygoz and other Crimean Tatars over a pre-annexation demonstration.   The list is large, and getting bigger.

It now includes Yevhen Panov who has been remanded in custody for 2 months, with this sure to be constantly extended. Russia began using ‘terrorism’ charges against opponents of annexation in May 2016 and this will only escalate while the cynical format for repression remains unchallenged.