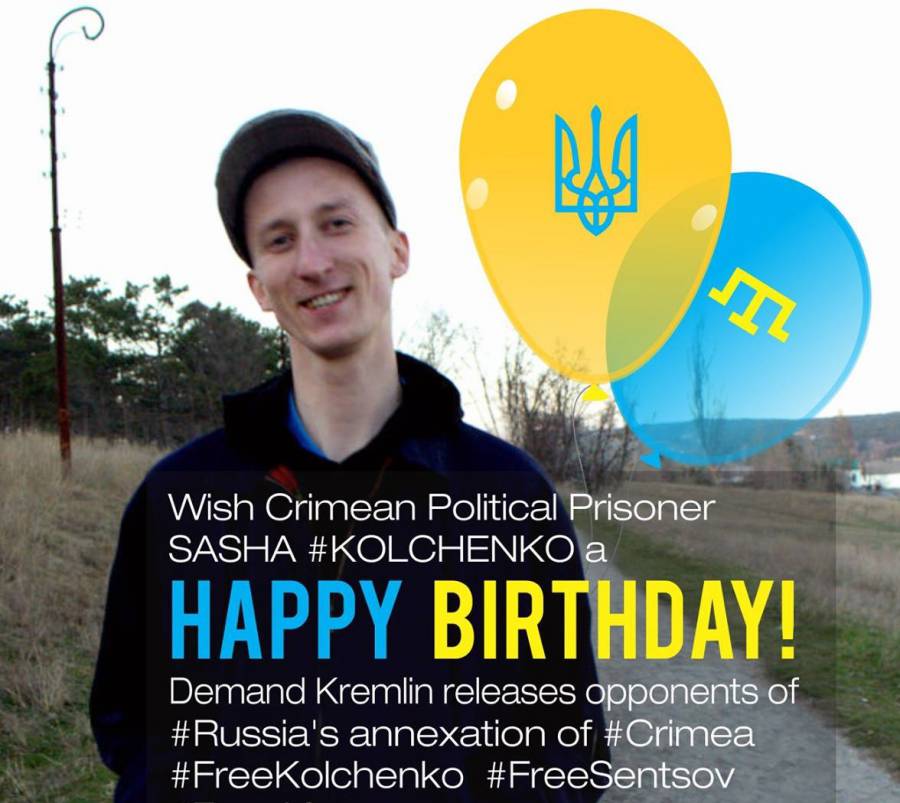 Ukrainian civic activist Oleksandr Kolchenko is turning 27 on Nov 26, his third birthday in Russian captivity.  The need for letters of support and also public attention is now even more urgent with Russia having just prevented real human rights activists from visiting him.  Kolchenko, renowned filmmaker Oleg Sentsov and other Ukrainian political prisoners are isolated and therefore in danger, making all letters and appeals an important message to Moscow as well that it is being watched.

Kolchenko, Sentsov and two other opponents of Russia’s invasion and occupation of their native Crimea (Gennady Afanasyev and Oleksiy Chirniy), were arrested in May 2014.  They were held incommunicado, then taken illegally to Moscow and only allowed to see lawyers after several weeks, almost certainly to hide the signs of torture.

It was only then that the FSB finally came out with quite extraordinary charges, claiming that Sentsov had been the mastermind behind a ‘Right Sector terrorist plot’ and that the other three were involved in and planning acts of terrorism.

It is likely that the fading marks of torture were the main reason, however it is not impossible that the FSB also needed something to back Russia’s increasingly preposterous allegations about the right-wing Ukrainian nationalist Right Sector movement which came to the fore during Euromaidan.  Russian President Vladimir Putin and all government-controlled media had used false claims about a ‘fascist junta’ in Kyiv as an attempt to justify Russia’s invasion of Crimea, and military aggression in Eastern Ukraine.  ‘Right Sector’ was particularly demonized and its role seriously exaggerated.

The Ukrainian presidential elections on May 25 were a terrible blow to the Kremlin and Russian propaganda.  Not only had Ukrainians succeeded in uniting behind one candidate, the elected President Petro Poroshenko, but they also demonstrated how little support the far-right in fact had.  The candidates representing Right Sector and the far-right Svoboda party could only muster 2% for both.

Russian TV reacted to this initially by lying, and producing a purported ‘real victory’ for the Right Sector candidate, but this could only be a temporary measure.  Willy-nilly, the truth would out.

5 days later, the FSB came up with their ‘Right Sector terrorist plot’ in Crimea.  Afanasyev and Chirniy had both provided ‘confessions’ under torture (and received shorter sentences).  These were then used to justify the FSB’s grandiose claims about the alleged ‘plot’.

Sentsov had done nothing at all, and the monstrous 20-year sentence only confirmed his allegations from the beginning of torture and threats that if he didn’t provide the ‘testimony’ they demanded, that he would be made the ringleader and ‘rot in prison’.

Both men were almost immediately declared political prisoners by the Memorial Human Rights Centre.  Afanasyev was also recognized as a political prisoner after he had the courage to stand up in court on August 31, and retract all testimony as given under torture.

The court ignored the absurdity of the whole ‘case’ and Afanasyev’s retraction, and sentenced Sentsov to 20 years, Kolchenko to 10.  The two men stood arm in arm as the sentence was being read out, singing Ukraine’s national anthem.

There have since been cynical moves pretending willingness to consider the men’s extradition.  These ran parallel with continued attempts to force Russian citizenship on them.  Even Russia’s outgoing Ombudsperson Ella Panfilova acknowledged that the men are Ukrainian and the indictment gives only their Ukrainian citizenship, yet Russia has now claimed that they cannot be released.  The reason is a record-breaker in cynicism.  The two men, whose persecution for opposition to Russia’s invasion is internationally recognized , are supposed to have ‘automatically’ become Russian because of that invasion.

PLEASE also write to politicians in your country and ask them to demand that Russia honours its commitments and releases the Ukrainians it is holding hostage.