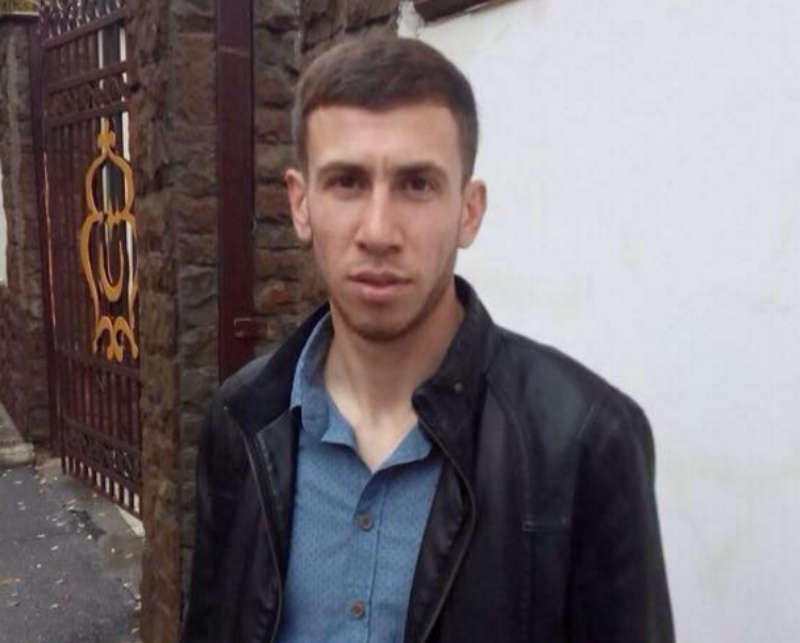 A young Crimean Tatar was effectively abducted on Wednesday by Russian FSB officers who took him to a field and threatened to bury him if he refused to testify against 6 men, including a prominent human rights activist, facing gravely flawed charges.  Emil Mukhteremov refused and was thankfully released after several hours, with the FSB head now denying any of this, despite a witness who was with him when the FSB arrived.

The news sped swiftly through social networks early on March 15 that Emil Mukhteremov had been taken away by four men in plain clothes who identified themselves as from the Russian FSB.  Mukhteremov had just come out of a bank with another person and got into their car when the four men drove up.  The men took him from the car and drove him away.  He was first taken to the FSB department in Feodosia.  His arrival there was not recorded, no protocols were drawn up, nor was he questioned.

He appears to have then been taken about 80 kilometres from Feodosia, into an open field where they told him to dig a hole, for them to bury him.  They also tried to put something into his pocket.

The aim appears to have been to get him to appear as a ‘witness’ in the trial of 6 men who are in indefinite custody accused of involvement in Hizb ut-Tahrir.  This totally peaceful organization is legal in Ukraine and most countries, and Russia has never provided adequate reasons for banning it.

Unsurprisingly, since there is no reason to believe that any of the men are in fact involved in it, Mukhteremov had nothing to say and courageously rejected the men’s demand.  Possibly because there had been a witness to his ‘detention’, the FSB officers gave up and simply left him in the field.

KrymSOS later tried to get an explanation from the head of the Feodosia FSB.  He denied the information and refused to comment on his staff’s actions.

Edem Semedlyaev, one of the lawyers representing the 6 imprisoned men, has confirmed the information about Mukhteremov’s treatment and says that this is how the FSB are trying to get ‘witnesses’ for the case.

19 Crimean Muslims, most of them Crimean Tatar, are in detention on spurious charges of involvement in an organization Ukraine has never banned.

Four men from Yalta: human rights activist Emir-Usein Kuku, Muslim Aliev; Vadim Siruk and Enver Bekirov were arrested on Feb 11, 2016, after armed and masked men burst into several homes in the early morning, terrifying children who had been fast asleep.  Nothing ‘incriminating’ was found in any of the searches, yet the men were taken away in handcuffs and remain imprisoned, facing long sentences.

In all of Russia’s ‘Hizb ut-Tahrir prosecutions, men are charged either with Article 205 § 2 (involvement in a so-called terrorist group) or 205 § 2 for allegedly belonging to an organization which is totally legal in Ukraine.  In Russia there appears to be no need even for proof of involvement since convictions are effectively guaranteed, with anonymous ‘witnesses’ who can, in secret, testify that a defendant tried to ‘recruit’ them, being quite sufficient.  In occupied Crimea, the men have proper lawyers who are insisting on being shown evidence and there is none.

Two young men – Refat Alimov and Arsen Dzhepparov – were arrested in April 2016.  It is widely believed that the FSB may have been hoping that two much younger men would prove more malleable and could be ‘persuaded’ to give false testimony against the others.  They were mistaken and all six men are refusing to give testimony or in any way cooperate with the investigators.

Russia recently added a new charge of ‘attempting violent seizure of power in Russia’ with this carrying a near-guaranteed increase in sentence of from 12 to 20 years.  There are no rational grounds for suddenly adding these new charges, and certainly no new ‘evidence’

A tradition of abduction

The treatment of Mukhteremov on Wednesday is ominously reminiscent of an apparent abduction attempt against Emir-Usein Kuku in April 2015, 10 months before his arrest.

Kuku became involved in human rights monitoring for the Crimean Contact Group on Human Rights in late 2014 after the first abductions and disappearances of young Crimean Tatars in the months after Russia’s invasion and annexation of Crimea.

On April 20, 2015 two men attacked him and were probably planning to abduct him.   The plan was foiled when Kuku managed to shout and attract attention.  After a crowd gathered, the assailants claimed that they were ‘police’.  Soon afterwards a white van drove up.  At least four masked men in full military gear with machine guns jumped out and demanded that the crowd disperse.  They violently forced Kuku into the van, and drove off, followed by some of those who’d stopped to help Kuku and feared he was being abducted.

In the van, they proceeded to beat him, and he heard one of them on the phone tell somebody that they were being followed and needed to change cars.  The masked men were angry that he had attracted a crowd, and kept consulting with somebody by telephone about what to do.  It seems at that point that the plan changed, and they suddenly announced that they needed to carry out a search of his home.

The ‘officers’ removed Kuku’s laptop, and his wife’s, a telephone and seven religious books which were not on Russia’s list of prohibited literature.  Kuku made fully justified, though futile, attempts to get an investigation carried out into his treatment.

In December 2015, he was threatened with ‘extremism’ charges over material posted on his his Facebook page.  There was no mention then of Hizb ut-Tahrir, yet just two months later, on Feb 11, 2016, he was arrested after an armed search which Kompaneitsev took part in.

This is the case that Mukhteremov was told he must appear as ‘witness’ in – or dig his own grave.