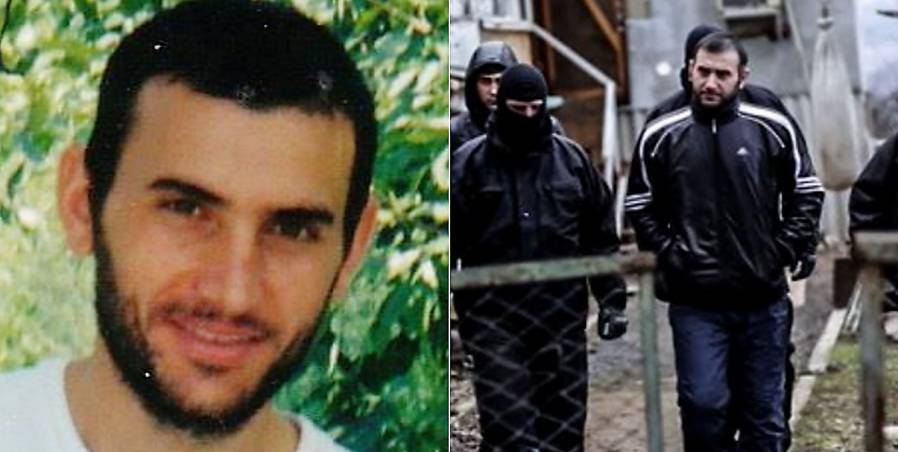 Muslim Aliev, a Crimean Tatar held in detention since armed and masked men burst into his home, terrifying his children, in February this year, has now been forcibly placed in a psychiatric clinic in Simferopol.  There are fears that he and other political prisoners will face undisclosed ‘psychiatric treatment’.

Aliev has been held in detention since February 2016 when armed and gratuitously violent searches were carried out of a large number of mainly Crimean Tatar homes in the Yalta region.  His wife, Nadzhiye Adzhi-Mamutova says that it’s impossible to describe the experience of that morning in words.  Armed men burst into their home, and threw her husband to the floor.  One of the children tried to hide in the bed, asking when the armed and masked men were going to kill them all.

They were read out a court search order which Aliev’s wife says sounded just like a sentence.  The search was purportedly for weapons, etc.  They found none, nor anything else incriminating, but he was arrested anyway.

43-year-old Aliev has four children, one of whom was gravely ill as a child, and still has serious medical issues.  He worked at several jobs in order to pay for the medical treatment his daughter required, and devoted any free time to his family, though was always ready to help neighbours when needed.  He is well-known and respected in Kutuzovka where the family live.

The four men detained that day – Muslim Aliev, Envir Bekir, Emir-Huseyn Kuku and Vadim Siruk – were all charged with involvement in the Hizb ut-Tahrir organization which is legal in Ukraine and most other countries.  Russia declared it ‘terrorist’ in 2003 without ever providing a reason, and now uses arrests on charges of mere ‘involvement’ to imprison people for long periods.  There is no evidence of any illegal activities by Hizb ut-Tahrir anywhere in the world.  There is also no proof that the men are in fact involved in the organization, however Russia gets around this by using ’secret witnesses’ who cannot be properly challenged and cross examined.

It is extremely likely that Kuku was arrested because of his human rights monitoring work for the Crimean Contact Group on Human Rights and that his arrest followed an aborted attempt to abduct him in which the FSB was clearly implicated.

It is likely that Siruk was targeted as an ethnic Ukrainian.  He and his wife, Anna Bogacheva, are both converts to Islam.  It is suspected that he was arrested so that the occupation authorities could claim that they were not only arresting Crimean Tatars.  Human rights lawyers defending the growing number of Crimean Muslims now under arrest also believe that Russia is trying to intimidate ethnic Ukrainians and warn them to stay away from Islam.

In most cases, as with Muslim Aliev, the occupiers appear to have singled out men who are well-known in their communities, well-respected and devout Muslims.

More, it appears, is not needed to be arrested under Russian occupation.

Six men are to face such forced psychiatric ‘assessment’:  Aliev, Bekir, Kuku and Siruk, as well as two very young Crimean Tatars – Refat Alimov and Arsen Dzhepparov who were arrested in April this year, and who are from the same town as Bekir.

All six men had refused to undergo any psychiatric assessment in solidarity with 59-year-old Crimean Tatar leader Ilmi Umerov.  The Deputy Head of the Crimean Tatar Mejlis or representative assembly is facing criminal charges and a possible 5-year sentence, accused of what Russia terms ‘public calls to action aimed at violating Russian territorial integrity’ via the Internet.  Umerov stated in a TV interview, as do all democratic countries, that Crimea is Ukrainian and that Russia should be forced to leave both Crimea and Donbas.  He was forcibly held in a psychiatric clinic for around 3 weeks, with this imprisonment posing an actual danger given serious medical conditions.

There is no justification for any forced psychiatric assessment of the 6 men who had all efused to answer any questions about their so-called ‘case’ or in any way cooperate with those carrying out ‘psychiatric tests’.  This was, Siruk’s lawyer Emil Kurbedinov confirms, in solidarity with Umerov, but also a statement of protest against such tests which they consider to be degrading and a slur against them.