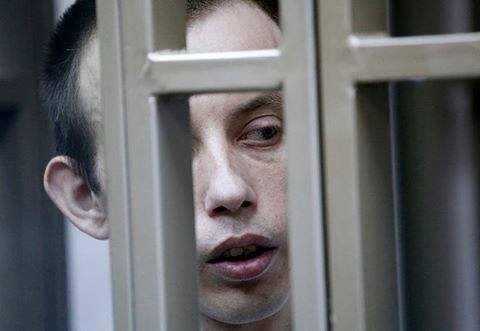 A Russian Supreme Court appeal hearing in Moscow on July 27 could result in an innocent Ukrainian being sentenced to 17 years’ imprisonment and it is of critical appearance that journalists and human rights organizations attend.  Everything about the arrest, trial and retrial of Crimean Tatar Ruslan Zeytullaev is of grave concern, and a new lengthened sentence will also have major implications for other men facing similar charges.

Russia, which is illegally occupying Ukrainian Crimea, is imprisoning Ukrainian Muslims for alleged involvement in an organization - Hizb ut-Tahrir – which is legal in Ukraine.  This is one of the multiple reasons why the renowned Memorial Human Rights Centre declared Zeytullaev and three other men from Sevastopol: Ferat Saifullaev; Rustem Vaitov and Nuri Primov political prisoners on July 18, 2016 well before their ‘trial’ in Rostov ended.  There is no justification for the relative silence of international human rights organizations.

The original trial was so flawed, the lack of evidence so glaring that even the Russian Military in Rostov  balked at providing the long sentences demanded by the prosecutor.  On 7 September 2016, Saifullaev, Vaitov and Primov were sentenced under Article 205.5 § 2 of Russia’s criminal code with involvement in ‘a terrorist organization’.  They all received the minimum 5-year sentence (rather than the 7 or 8 years demanded).  The court also reduced the charge against Zeytullaev from ‘organizing’ a Hizb ut-Tahrir group, to ‘involvement’ in it, and sentenced him to 7 years.

The said ‘retrial’ was essentially a re-run of the first flawed trial, but with the judges aware that a new sentence was ‘required’.  This was, unfortunately, provided on April 27, 2017.  The second panel of judges at the same Rostov court sentenced Zeytullaev to 12 years, which was still five years less than the sentence demanded by the prosecutor.

On July 27, 2017, Russia’s Supreme Court is due to hear the appeals both from the defence and from the prosecutor, demanding 17 years.  While the defence will surely provide compelling arguments, their chances of reducing the sentence are probably near zero.

32-year-old Ruslan Zeytullaev has not seen his three small daughters since his arrest on January 23, 2015.  He is facing a 17-year sentence essentially for the FSB’s paperwork to be ‘in order’.  All of their largely conveyor-belt prosecutions for supposed involvement in Hizb ut-Tahrir require an ‘organizer’ and envisage long sentences.

No recognizable crime is required, and, as the case of the ‘Sevastopol Four’ has demonstrated, there need be no proof either.

There is no evidence that members of this organization have committed acts of terrorism anywhere in the world.  Russia’s Supreme Court declared it ‘terrorist’ in 2003 without providing any good reason, and kept the decision secret until it was impossible to lodge an appeal against it.   Memorial Human Rights Centre expert, Vitaly Ponomaryov believes that Russia may have declared the organization terrorist to make it easier to extradite people to Uzbekistan where they almost certainly faced religious persecution and torture.  The human rights group declares all those sentenced merely for involvement in Hizb ut-Tahrir political prisoners.

As mentioned, it is already a grave breach of international law that Russia, as occupying state, is imposing its law on Crimeans.

Even without this fact, the imprisonment and trials would still have aroused immense concern.  There was no proof that the men were currently members of Hizb ut-Tahrir, and almost all the prosecution’s ‘witnesses’ testified in the men’s favour.  In one or two cases, they also revealed the threat of imprisonment or similar that the ‘investigators’ used to obtain testimony.

One of the main ‘prosecution witnesses’ was a former Ukrainian Security Officer who changed sides after Russia’s invasion.  He is known to have had his own, corruption-based, realizes for a vendetta against Zeytullaev and Saifullaev from back in 2012.

Saifullaev rightly said in court that the men were on trial for their political and religious views.  This is abundantly clear from the original verdict, and it is a terrible indictment of Russia’s prosecutor’s office and courts that men who were living peaceful, law-abiding lives and bringing up their children, are imprisoned essentially for their faith.

Zeytullaev’s request to journalists to cover this court hearing in Moscow can only be reiterated, especially since the prosecutor’s success in this case will almost certainly mean that huge sentences can also be expected in the cases of 15 other Ukrainians facing similar charges in Russian-occupied Crimea.

Please write to Ruslan!  It is vital that he knows – and Moscow is reminded – that he is not forgotten.  Letters or postcards need to be in Russian, and should not contain any discussion of the cases or politics generally.  If it is a problem to write in Russian, just copy-pasting the following will be fine.  Addresses for Ferat Saifullaev; Rustem Vaitov and Nuri (Yury) Primov can be found by pressing the hyperlinks on their names at the beginning. 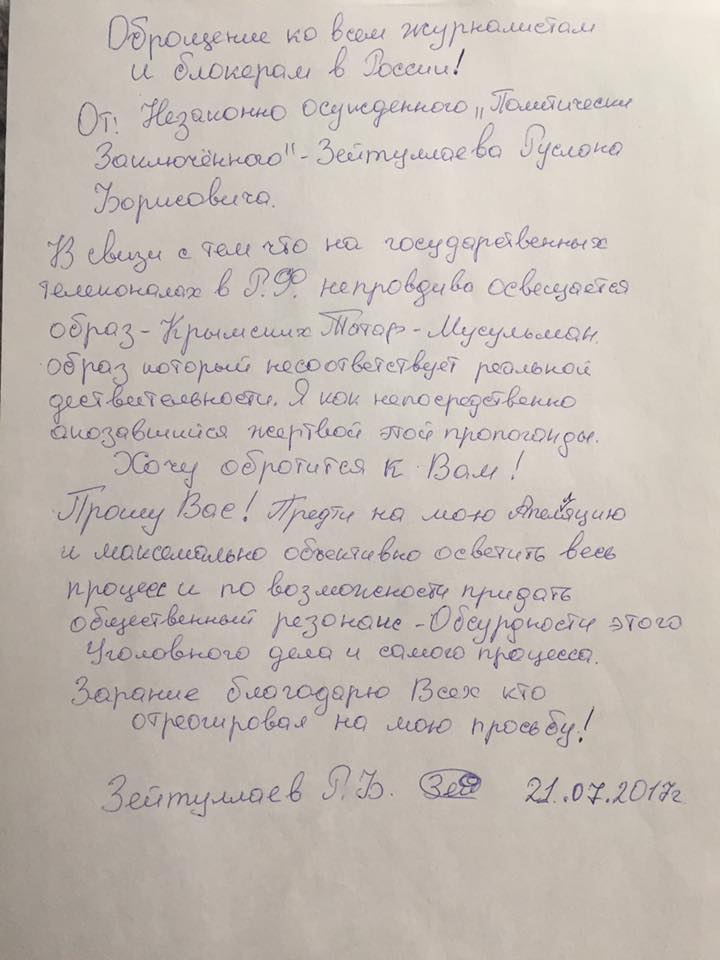