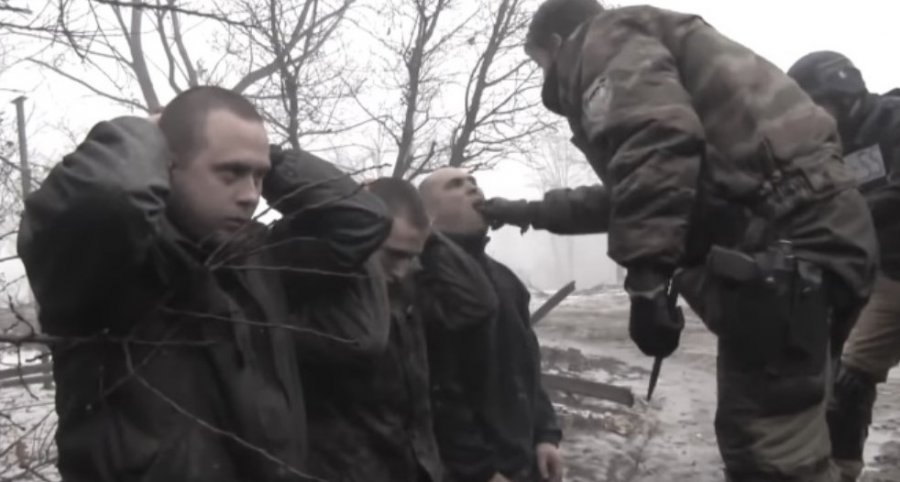 Ukraine has passed information to the International Criminal Court [ICC] in the Hague about extrajudicial executions of nine Ukrainian soldiers taken prisoner during the battles for Ilovaisk and Debaltseve.  The Prosecutor General’s Office reported on 5 December 2019 that it had sent the ICC Prosecutor evidence of war crimes committed by Russians in Donbas.

The material was prepared by lawyers from the Ukrainian Helsinki Human Rights Union, in cooperation with prosecutors from the Department on Criminal Proceedings investigating crimes committed during the armed conflict.  It includes photographic and video evidence showing that the Ukrainian soldiers had been taken prisoner, as well as witness testimony and documents confirming that they were killed while prisoners of war.

The evidence suggests that the killings were carried out by fighters of the so-called ‘Cossack Union’ Don Army Oblast, rather than directly by the Russian military who are known to have been deployed in both the battle for Ilovaisk in late August 2014 and the battle for Debaltseve in January-February 2015.  This, the information points out, is typical of Russian practice to make it appear that others are responsible for various military activities, although in fact these are illegal armed formations under Russian control. This is one of five such reports which the Prosecutor General’s Office has sent to the ICC so far, and the process is ongoing.

Russia is known to have deployed so-called ‘Cossacks’ for its invasion and annexation of Crimea and for the military conflict in Donbas.  In occupied Crimea, their deployment is now again being extended, almost certainly because they can be used to do the dirty work that the occupation enforcement bodies do not want to be seen doing.

At both Ilovaisk and Debaltseve, Russia is also known to have used military personnel, and indeed in a study entitled Russian Forces in Ukraine * and published in March 2015 by the UK-based RUSI [the Royal United Services Institute for Defence and Security Studies], military specialist Igor Sutyagin estimated that there were at least 10,500 – 11,000 Russian troops operating in eastern Ukraine by March 2015.

The Russian militants who played critical roles in the conflict in Donbas in 2014, including the so-called ‘prime minister’ of the self-proclaimed ‘Donetsk people’s republic’ [DPR], Alexander Borodai, have themselves acknowledged that they would have been defeated without Russia’s substantial ‘help’.

While Russian President Vladimir Putin and his people have consistently claimed that any Russians fighting in Ukraine are ‘volunteers’, there is a weight of evidence, including video footage of vast amounts of Russian military technology and men heading towards the border in August 2014, to refute such claims.

They have also recently been undermined by both intercepted telephone calls and witness testimony gathered by the Joint Investigative Team investigating the downing by a Russian BUK missile over Ukraine of Malaysian airliner MH17. Several calls demonstrate direct contact between DPR leaders and Russian government and military officials, as well as the Russian FSB [security service].  In one conversation from 3 July 2014, Borodai can be heard stating that he is “carrying out orders and protecting the interests of one and only state, the Russian Federation’.

The JIT’s findings, as well as other evidence, are important for current and potential proceedings in international courts, including Ukraine’s case against Russia at the UN’s International Court of Justice.

They should also, of course, be of significance for ICC, although here the pace seems frustratingly slow.  Although there are no good grounds for Ukraine to have still not fully ratified the Rome Statute, this is not the problem as Ukraine’s Government has lodged two declarations under article 12(3) of the Statute accepting ICC jurisdiction over crimes linked with the Euromaidan protests, and over crimes committed on Ukrainian territory from 20 February 2014 onwards.

The ICC Office of the Prosecutor very importantly concluded back on 14 November 2016 that the situation with Crimea constitutes an international armed conflict between Ukraine and the Russian Federation.  This is of crucial importance since it means that the conflict falls under the Rome Statute, and is within the International Criminal Court’s jurisdiction.  Putin reacted immediately – and pointlessly – by announcing it would not be participating in the ICC.  There were many misleading headlines over this which ignored two crucial facts.  Russia had not yet joined ICC, by ratifying the Rome Statute.  Secondly, and most importantly,  Russia can be deemed liable for crimes committed on foreign territory regardless of whether it is a member of the International Criminal Court or not.

It says that “In early 2019 the Office completed its preliminary analysis of subject-matter jurisdiction and assessed that there was a reasonable basis to believe that a number of crimes under the Statute had been committed both in the context of the situations in Crimea and in eastern Ukraine.”

Very many Ukrainians would dispute how much, in fact, the conflict in eastern Ukraine can be called “a non-international armed conflict involving Ukrainian armed forces and anti-government armed groups”.  There are, after all, overwhelming grounds for believing none of the conflict would have arisen, nor would it be continuing, without direct control from Moscow, and without ongoing supplies of men, arms and funding. For the moment, the Office of the Prosecutor is continuing to consider “information that suggests that the Russian Federation may have exercised overall control over armed groups in eastern Ukraine for some or all of the armed conflict,”, and adds that “the existence of a single international armed conflict in eastern Ukraine would entail the application of articles of the Statute relevant to armed conflict of an international character for the relevant period.”  Judging by the progress being made by the JIT investigators into the killing of the 298 civilians on MH17, proof of such direct control could well be demonstrated during the first trial in March 2020.

*  If this link ceases to be current, the report can also be found here http://mepoforum.sk/wp-content/uploads/2015/03/Russian-Forces-in-Ukraine-RUSI.pdf