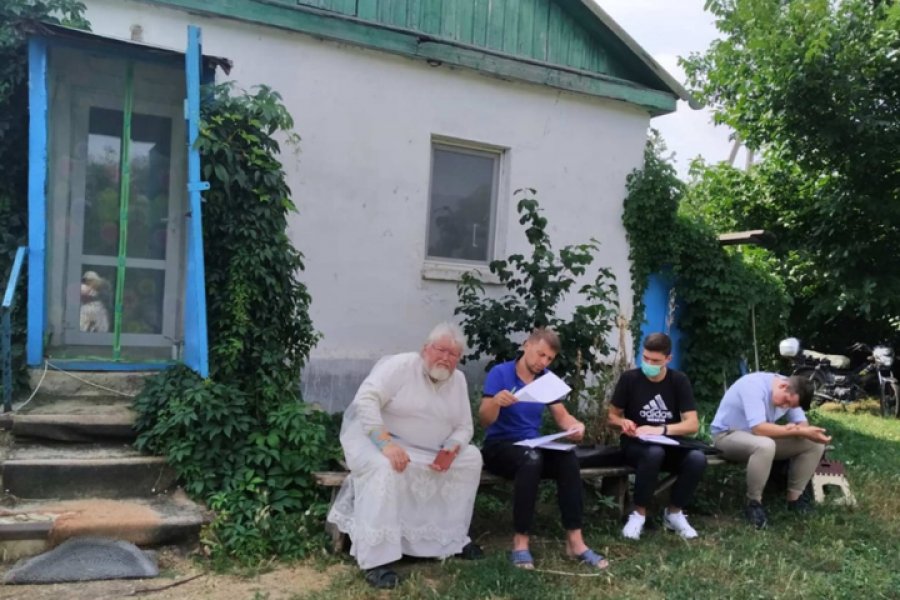 Russia’s persecution of the Orthodox Church of Ukraine [OCU] and its believers has hit a new low with the Head of a Ukrainian Orthodox monastery in Russian-occupied Crimea facing administrative prosecution for so-called ‘unlawful missionary activities’ in his own church.  Archimandrite Damian reported on 11 August that he has received a courts summons for 17 August, with the charge falling under Article 5.24 § 4 of Russia’s code of administrative offenses.

The move follows the raid on the St. Demetrius of Thessaloniki Men’s Monastery in the village of Balki (Bilohirsk region) on 8 August when officers from the so-called ‘Centre for countering extremism’ burst into the church and prevented the Sunday service from continuing.

The raid timed to coincide with the Sunday morning service was carried out by Major Volodymyr Viktorovych Gorievanov and his men from the ‘centre for countering extremism’.  They burst into the church and forced Archimandrite Damian to stop.   They claimed that the service was ‘illegal’, seemingly because it was in premises that were not in accordance with Russian legislation and cited the Russian-controlled ‘Crimean ministry of justice’.  The monastery is in a private building, with the living quarters separate from the premises now serving as a place of worship. According to Archimandrite Damian, plans to build a church near the monastery were underway in 2014, but had to be stopped following Russia’s invasion and annexation. According to Archbishop Klyment Head of the Church in Crimea, the congregation were forced to leave the church and Gorievanov began drawing up a ‘protocol’.

Archimandrite Damian says that he was contacted by a ‘Centre for countering extremism investigator’ who informed him of the court hearing and asked if he agreed or disagreed that there had been an ‘offence’.

“Of course I don’t agree. The entire world doesn’t agree with this, the UN disagrees”, he replied.

Ukraine’s Crimean Prosecutor has initiated criminal proceedings over this evident obstruction of religious ceremonies (under Article 180 § 1 of Ukraine’s Criminal Code).   The occupation regime’s actions are described as a direct violation of international humanitarian law and the latest example confirming Russia’s discrimination against the Ukrainian religious community in Crimea. Ukraine’s Ministry for Occupied Territory and Internally Displaced Persons also announced that it has drawn up a sanctions list against individuals persecuting the Orthodox Church of Crimea in Crimea.

On 10 August, the US Embassy in Kyiv added its voice to the considerable protest over this new attack on the Ukrainian Orthodox community in Crimea, stating: “We stand with the faithful of the Orthodox Church of Ukraine in Crimea after Russian security forces disrupted Sunday services in Bilohirsk on spurious claims. We will always support religious freedom, free from external influence. Let the people pray! #CrimeaIsUkraine”

Although essentially all faiths in Crimea, except the Russian Orthodox Church, have faced pressure and discrimination under Russian occupation, the Ukrainian Orthodox Church has been particularly targeted, because of its condemnation of Russia’s invasion and occupation and because it provides an oasis of Ukrainian identity which Russia is trying to eradicate.

Various methods have been used to try to deprive the Church and believers of their places of worship and to drive them out of Crimea.  With a year of Russia’s invasion, 38 of the 46 parishes had ceased to exist, with three churches – in Sevastopol; Simferopol and the village of Perevalne – having been seized by the occupation regime.

Ukraine’s government was unfortunately slow to take vital steps to protect the Church and its property. It was only in early 2020 that the government finally transferred the Cathedral of Saints Vladimir and Olga in Simferopol to state ownership, thus making it possible for Ukraine to call upon international partners and approach international courts to defend the Cathedral and its believers from Russian plunder.

Such plunder has essentially known few limits in occupied Crimea and the transfer might not have made a difference.  It should, nonetheless, have been carried out immediately after Russia’s annexation, especially given that Klyment had stated from the outset that the occupation regime had offered money to get him to renounce the Cathedral in Simferopol.  Since the land had under Ukrainian law, been the property of the Autonomous Republic of Crimea, the Russian occupiers claimed it to be ‘federal Russian property’ which the Archbishop was illegally occupying.

In January 2016, the Russian-controlled Crimean Arbitration Court issued a ruling ordering the Church to vacate 112 m²  of the premises (the ground floor) and to pay a prohibitive half a million roubles,  which were claimed to be for communal services.

The attempts to totally evict the Diocese and the congregation date back to 2019.   Klyment reported on 8 February 2019 that he had received a writ ordering that he vacate the Cathedral within 30 days and warned that this was likely to lead to eight parishes in rural areas also being forced to close.

According to Serhiy Zayets, the lawyer representing the Ukrainian Orthodox congregation, the real attempts to evict the Church began at the end of August 2019. They did, however, run up against a serious obstacle when, in September 2019, the UN Human Rights Committee intervened, applying Rule 94 to halt the eviction of the congregation.

This appeared to have had some impact, with Russia’s Supreme Court in December 2019 halting implementation of the eviction order.  However, on 4 August 2020, the Supreme Court rejected the appeal against the decision to evict the congregation.

Zayets warned then that it was time to sound the alarm. The Supreme Court ruling, he said, “essentially means the total dissolution of the Ukrainian Orthodox community in Crimea.  This is not formally genocide, but it borders on it. Russia is destroying yet another Ukrainian religious and cultural group and is continuing to purge Crimea of all that is Ukrainian”.

Klyment’s earlier warning was equally stark: “If there is no Diocese and no Cathedral (of Saints Vladimir and Olga), it will not be possible to speak of anything Ukrainian having been preserved in Crimea.”