Maria Savchenko: Help Save My Daughter 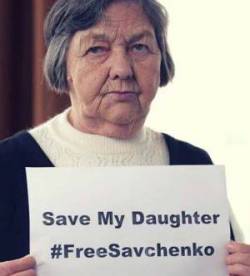 The Kremlin remains silent as calls mount throughout the world for imprisoned Ukrainian former pilot and MP, Nadiya Savchenko’s release.  Nadiya Savchenko has been on total dry hunger strike since Friday, and her lawyer believes that she may be too weak by Wednesday to be taken to court (an hour and a half’s drive in each direction.).   The statement from the European Union stresses that her release is in accordance with the Minsk Agreement.

The most moving appeal is surely that given by Maria Ivanivna Savchenko, calling on world leaders to help save her daughter.

Her letter has been translated and published by the Atlantic Council.

I am the mother of Ukrainian pilot, officer, and MP Nadiya Savchenko.

On June 17, 2014, my daughter was kidnapped and transported to Russia with a bag on her head. Russian Secret Services held her as a hostage for twenty months already, depriving her of sleep and her basic human rights, and torturing her.

Now the Russian prosecution asks for a twenty-three year sentence, despite her innocence.

She has been put on a show trial with no exonerating evidence accepted.

On March 3, Nadiya started a hunger strike without water to oppose the Court of Injustice, which deprived her even from the right to say a last word.

I know my daughter. She is a true soldier. She will not give up.

If something is not done urgently, I will lose my daughter, and Ukraine will lose one of its most beloved patriots.

I beg of you, as a voice of many Americans and someone who may lead the United States in the future, to do these four things to help save my daughter:


Call for her urgent release;

Call for justice and sanctions against anyone involved in her false arrest, torture, and detention if she were to die; and

Say the entire world is watching.

Thank you and God bless you,
Mariya Ivanivna Savchenko