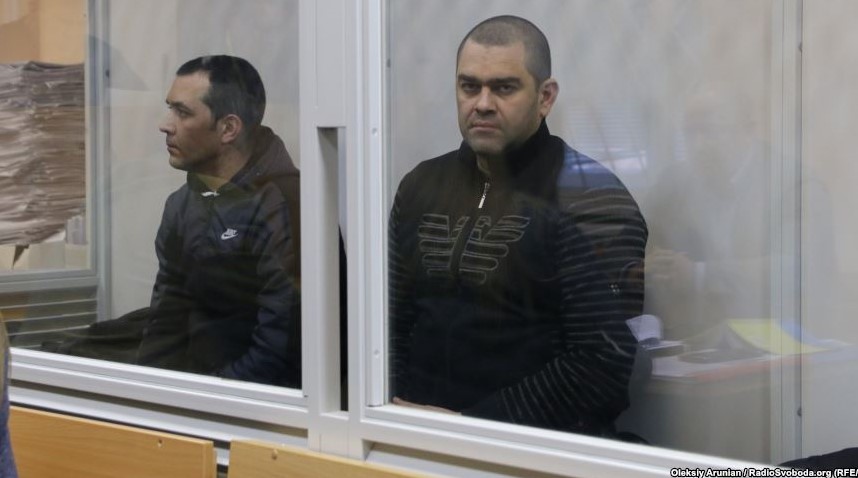 Two men are about to go on trial in Ukraine charged with 27 apparent hate crimes in 2016 and 2017 which the prosecution believes were aimed at inciting inter-ethnic enmity in Ukraine.  Some of the crimes, especially one particularly gross ‘anti-Semitic attack’, made world headlines and were certainly bad for Ukraine’s reputation.  It remains to be seen whether the prosecution has enough evidence to prove not only the men’s guilt, but that these were commissioned ‘hate crimes’ engaged in for profit and probably with a Russian link.

The crimes included the desecration of a synagogue in Chernivtsi on 19 November 2016 and a shocking attack on a synagogue in Uman in the early hours of 21 December 2016.  The synagogue is next to the grave of Rebbe Nachman of Breslov, a place of pilgrimage for Hassidic Jews, and pilgrims were praying in the synagogue at the time. The young men who burst in shouted anti-Semitic insults, sprayed the premises with bottles of red paint and left a pig’s head with a swastika carved out.

Jews were not the only target. There were acts of desecration against the Memorial to the murdered Poles and Jews at Huta Penyatska in the Lviv Oblast on 9 January 2017 and two months later, on 12 March.  Grenades were hurled at different times near the Lithuanian and the US Embassies in Kyiv, and outside the Polish Consulate in Lutsk.

Some of the offences that have been added to the indictment seem rather odd (attacks, for example, against the offices of the Organization of Ukrainian Nationalists, and against the far-right National Corps).

At least two people were injured when a grenade was hurled on Hrushevsky St (where Ukraine’s Verkhovna Rada or parliament is situated) on 24 August 2017.

There has been extremely little information about this investigation, and there is nothing to indicate whether the prosecution really can prove that the men were involved in all 27 incidents.  Oleksiy Arunyan, writing for Zaborona has given the only detailed account of the case to date, and the following is mainly based on his report.

Dmytro Chornodubravsky is accused of having commissioned the offences, while Serhiy Bakhchevan is alleged to have carried them out. Two other men, suspected of carrying out the attacks – Boris Mushchenko and Bohdan Shevchenko are on the wanted list.  Mushchenko was arrested back in the autumn of 2017, but fled after his cooperation with the investigators led to his being released, first under full house arrest, and then only under a night curfew.

Although Bakhchevan initially admitted the charges and agreed to work with the investigators, he retracted this after Muschenko’s disappearance and now asserts that any confession was given under torture. He and Chornodubravsky now deny all the charges, and reportedly put any blame only on Muschenko.

The prosecution alleges that 32-year-old Bakhchevan hurled the grenade which injured two people on Hrushevsky St, and that his genetic traces were found on the device.

Bakhchevan and Mushchenko were arrested on 1 October 2017 in Zakarpattia.  Grenades and a cannister with propane gas were found in their car.  They were allegedly planning to blow up a Hungarian monument. On the same day, Chornodubravsky was arrested in Kyiv.

The police say it was another attack on 21 September 2017 in Uman, in which an explosion slightly injured a 13-year-old child, that put them on the men’s track.  Ukraine’s SBU [Security Service] made public video footage where Bakhchevan can be seen.  The prosecution asserts that this was the men’s fourth anti-Semitic attack.

The National Police and SBU were both involved in Bakhchevan’s arrest,  Both are silent with regard to his allegations of torture and that they knocked all but one of his front teeth out.

Bakhchevan in turn cannot provide a very convincing explanation as to why the car he was in when arrested was carrying grenades and a gas cannister, nor why he was in Uman.   He claims that Mushchenko had lost his licence through drunken driving and he just drove him as a favour.

Chornodubravsky also denies everything and claims that he has been targeted because the investigators wanted to connect the crimes with the former ruling Party of the Regions (under President Viktor Yanukovych) of which he was once a member.  He also asserts that the investigators offered him a deal whereby, if he admitted guilt and indicated that the people he was told to say commissioned the crimes, he would be given witness status, or even taken out of the trial altogether. He says he was shown photographs and was told he needed to say that they were from Moscow.

It is unclear what the line in court will be.  Immediately after the arrests, Interior Minister Arsen Avakov asserted that the men in custody were members of the Tornado gang.  The Mayor of Cherkasy and other officials, however, say that Tornado is still carrying out crimes in the area, but contract killings and armed robberies, not anti-Semitic attacks and similar.

Avakov has also suggested that the men were carrying out tasks for two former functionaries of the Party of the Regions, both of whom (Serhiy Tulub and Volodymyr Oliynyk) are living in Russia.

There have been many claims since 2014 of Russia being behind this or that crime. By lumping 27 different offences into one case, the prosecution has set itself a formidable task, and it is unclear how much real evidence they have.  With so many incidents involved, the trial is going to take a very long time.

Zaborona turned to Vyacheslav Likhachev, Head of the National Minorities Monitoring Group, for his comment.  Likhachev also pointed to the number of offences and lack of information available, all of which makes it difficult to judge how the trial will go.  He repeated remarks made earlier that he doubts that all of the offences were the work of the men on trial.

“If the aim of the perpetrators was to tarnish Ukraine’s image in the world, than to a considerable degree they succeeded.  If it was to spoil inter-ethnic relations within Ukraine, then they clearly didn’t (succeed).”

Likhachev does not, however, think it implausible that Russia could be behind acts of provocation, linked with apparent xenophobia and aimed at discrediting Ukraine in the international arena.  Nor does he see it as inconceivable that the middle men were former Party of the Regions functionaries, now in Russia and wanting to prove their uses to their Kremlin protectors.

Attempts to present Ukraine as rabidly anti-Semitic and ‘fascist’ began long before Russia’s invasion of Crimea, but the propaganda drive around such claims intensified from 2014 as the Kremlin sought to justify its aggression, first in Crimea, then in Donbas.

Huge amounts of money were spent on propaganda both in the Russian-language media and abroad.  The methods were often rather primitive, with some of the ‘separatist’ stunts literally for the Russian propaganda media cameras (see, for example, ‘Separatism’ in Lviv – For Money and Russian Propaganda ).  There were also supposed ‘massacres’ of Jews and ‘international appeals for help’ from non-existent organizations supposedly representing particular ethnic groups facing ‘persecution’.

The claims made were debunked by real organizations representing national minorities, and a large number of prominent Jewish organizations rejected such claims, even talking out full-page statements in world newspapers to refute them.

Whether all of the offences which the two men about to face trial are accused of were acts of provocation will be for the Pechersky District Court in Kyiv to determine.  As Likhachev notes, however, it is not only Ukrainian law enforcement bodies who have drawn such conclusions.

As reported in January 2019, three Polish nationals from the far-right and extremely pro-Russian Zmiana and Falanga parties are facing terrorism charges in Poland over an arson attack on a Hungarian Cultural Centre in Ukraine.  Poland’s Security Service [ABW] believes that the men received orders to carry out the attack from a German journalist, who has since been identified as Manuel Ochsenreiter, editor of Zuerst, a German neo-Nazi newspaper and a frequent guest on the Kremlin-funded English-language channel Russia Today.  Ochsenreiter has taken part in Moscow-paid ‘observer’ trips, as well as a Russian-based project where a number of far-right and other pro-Russian politicians declared their concern about supposed ‘political prisoners in Ukraine’.  Both Likhachev and Anton Shekhovtsov, a researcher into far-right movements, have expressed doubts as to whether Ochsenreiter was taking orders directly from the Russian FSB or similar.  Likhachev is, however, convinced that there are real grounds for concluding systematic use of provocation aimed at exacerbating interethnic relations and damaging Ukraine’s standing in the world.