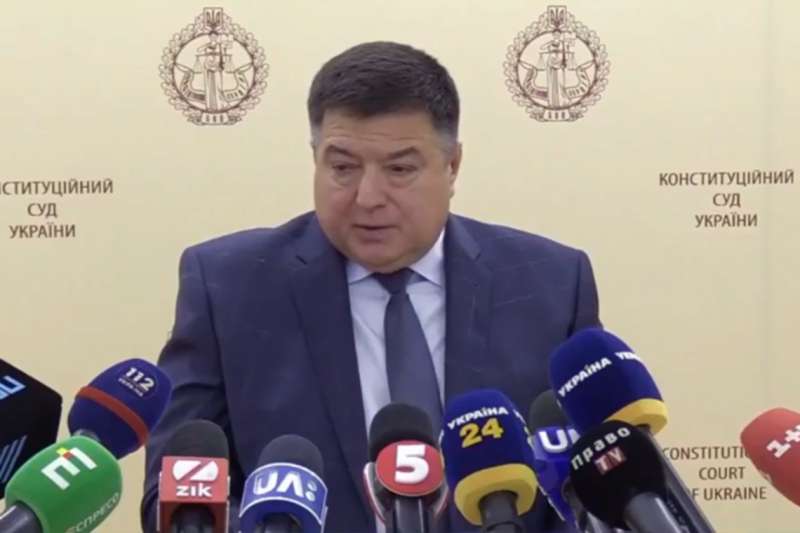 A major crisis has erupted in Ukraine following a 27 October Constitutional Court [CCU] judgement that has seriously obstructed Ukraine’s efforts to fight corruption and placed visa liberalization and other aspects of EU relations, as well as IMF funding, in jeopardy. Some of the measures proposed, including the bill introduced by President Volodymyr Zelensky which would remove all the current CCU judges, may well only deepen the crisis, however the majority Servant of the People party has promised to support the bill.

As reported, the CCU judgement found unconstitutional, and therefore revoked, certain critical parts of anti-corruption legislation, namely the criminal liability for knowingly false income declarations in Article 366-1 of the Criminal Code and a number of powers of the National Agency for Corruption Prevention [NACP].  Despite serious concerns about a possible vested interest in the ruling from the President of CCU, Oleksandr Tupytsky and at least one other judge, the Court’s rulings are final and not subject to appeal. The ruling has already led to suspension of electronic declarations, and stripped NACP of important powers for monitoring and checking for corruption.  Such anti-corruption legislation was a critical part of Ukraine’s moves towards visa liberalization with the EU and EU officials Ukraine’s Ambassador to the EU, Mykola Tochytsky that the cancellation of the legislation would be grounds enough to suspend the visa-free regime.

On 30 October President Zelensky tabled Draft bill No. 4288 ‘’.  This proposes to terminate the powers of CCU judges; declare their 27 October ruling to be null and void, as having “been adopted in conditions of a real conflict of interest”, and to cancel the changes made as a result of the ruling to the Law on Prevention of Corruption and Criminal Code.

Zhernakov is certainly convinced that a proper competitive system for selecting CCU judges is needed.  He notes that two judges from the six whom the President is allowed to choose were, under President Petro Poroshenko, selected by a panel including an international expert and representatives of civic society. Both judges, he adds, refused to vote for the 27 October judgement.  As well as the six judges appointed by the President, there are (or should be, since at the moment 3 posts are vacant) six judges appointed by the Verkhovna Rada and another six by the Congress of Judges.  Up till now, he says, you have ended up with almost exclusively politically engaged individuals, willing to come up with any ruling at the command of their political patrons. The situation is no better with those appointed by the Congress of Judges, he believes, as here people were appointed solely to suit corporate judges’ interests, often corruption-linked.

Volodymyr Yavorsky, from the Zmina Human Rights Centre, is under no doubt that the CCU ruling is a huge setback for fighting corruption in Ukraine, however that Zelensky’s bill will generate even more problems.

The Constitution does not give either the President or parliament the power to dismiss judges, and this would be a very dangerous precedent.  He believes that the bill is effectively abolishing the separation of powers (into the legislative; the executive and the judiciary).

The crisis, he says, has been brewing for a very long time, however he points in particular to the removal, “in illegal fashion”, in May 2019 of  the former CCU President, Stanislav Shevchuk, with the CCU even stripping him of his status as CCU judge.  Shevchuk appealed against this decision and an administrative court found his dismissal unlawful.  Over a year later, he has still not been reinstated.

Yavorsky adds that, since then, “the Constitutional Court has passed a fairly large number of extremely contradictory and, one might say, legally curious rulings.”

There is, undoubtedly, a problem that needs to be resolved but the essentially political solution which Zelensky is proposing has the problem that it can later be revoked, with this meaning that a real solution is simply being delayed.

Yavorsky cites Zelensky’s bill which calls the actions of CCU “an attempt to overturn the constitutional order and seize state power in Ukraine” and notes that the judges are effectively being accused of several crimes, although he is not aware of any criminal proceedings having been initiated.

In fact, that is not entirely the case.  The State Bureau of Investigations has summoned Tupytsky for questioning on 2 November with over possible state treason and illegal purchase of land in Crimea under Russian law.

As reported, the day after the disastrous CCU ruling, the Skhemy investigative journalist program published proof that Tupytsky had not stated on his income declaration, either in 2018 or 2019, that he had purchased land in occupied Crimea in 2018, and that the purchase had been carried out according to Russian law.  He has since suggested only that he “made a mistake” although failure to admit to this purchase made his involvement in the CCU ruling revoking criminal liability for such concealment at very least a conflict of interest, although also concealment of a crime.

On 30 October, Yaroslav Yurchyshyn, MP (from the ‘Holos’ party and former head of Transparency International Ukraine) that he had, as an MP, ensured that criminal proceedings under Article 109 of the Criminal Code (an attempt to seize power) were officially initiated (or at least recorded in the Single Register of Pre-Trial Investigations).

The chances of the latter investigation moving beyond inclusion in the Single Register, seem much lower, not least because this is the same accusation levelled against Pavlo Vovk, President of the District Administrative Court in Kyiv, and his colleagues. Despite seemingly very incriminating intercepted conversations, there has been very little real action even over the second wave of such revelations about Vovk & Co.  This, it should be said, is especially galling in the present situation since in one of the conversations, a voice that appears to be Vovk’s boasts: “two courts belong to us, the Constitutional Court and the District Administrative Court.”

One of the legal ways that Ukraine’s Verkhovna Rada could try to restore some degree of public confidence in the Constitutional Court, Yavorsky suggests, would be to introduce amendments to the Law on the Constitutional Court allowing judges under criminal investigation over crimes against national security to be suspended, pending the outcome of the investigation.  Parliament could also suspend implementation of the 27 October ruling in the same way. If judges who passed that court ruling were found to have acted in their own interests, that should be grounds for declaring the ruling to be mull and void, however this is something that CCU judges have the power to do, not the President or Ukrainian legislators.