Russia’s denial of accountability for MH17 in tatters with more court cases looming MH17 trial witnesses demolish Russian denial of involvement in downing of civilian plane Intercepted phone calls incriminate MH17 defendants and show extent of Russia"s control over war in UkraineImportant move by ECHR merges Dutch case against Russia over MH17 with Ukraine’s case over aggression in DonbasHague Court rejects Russian MH17 defendant’s attempt to endlessly investigate ‘alternative versions’Russia accuses Netherlands of hostile actions in seeking justice for MH17 victimsMH17 and the weapons of death that Russia is still bringing to UkraineMH17 witness reports Russian military personnel were at Buk missile launch site298 Empty Chairs: Victims’ families demand Russia admit liability on eve of MH17 trialMoscow attempts to get trial of key Russian MH17 suspects moved to RussiaDutch Prosecutor accuses Russia of deliberately hiding important MH17 suspectIntercepted calls prove Russian government control of militants in Ukraine on eve of MH17Russia hides MH17 suspect, then uses him for lies about the disaster and about ‘civil war’ in UkraineHow can Russia deny responsibility for MH17 when it gave up Sentsov, others to get key witness out of Ukraine?MH17 suspect release incriminates Russia, but leaves Ukraine compromisedFamilies of MH17 victims call for honesty and justice from Russia as the lies continueThree out of four MH17 suspects are ‘former’ Russian FSB or military intelligence officersRussian Twitter ‘false flag’ operation to blame Ukraine for MH17 broke all recordsEuropean Court of Human Rights demands answers from Russia over downing of MH17 over UkraineNext step the Hague after Russian military source named for Buk missile that downed MH17
• Topics / Terrorism
• Topics / Human Rights Abuses in Russian-occupied Crimea 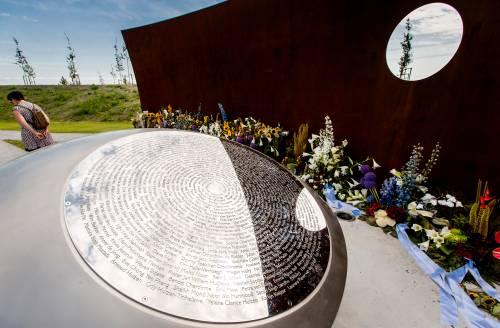 National Memorial to the Victims of MH17 ©ANP

Russia has lodged its first ever inter-state application at the European Court of Human Rights [ECHR], with a series of claims against Ukraine.  There seem no grounds for taking any of the accusations seriously, however two are of particularly staggering cynicism.  After sending the BUK surface-to-air missile carrier to Donbas where it was used to down Malaysian airliner MH17 and kill all 298 passengers and crew on board, Russia has brought a claim against Ukraine for not having closed its airspace.  It is also accusing Ukraine of not providing water to Crimea which it invaded in February 2014 and has been illegally occupying since.

ECHR has already rejected Russia’s application for it to apply Rule 39 and impose interim actions, with these having included the re-opening of the Northern Crimean Canal whose flow of water from the Dnipro River to Crimea was stopped after Russia’s annexation of the peninsula.  While it is obviously for the Court to decide whether the application is admissible and then whether any of the claims have merit, the demand that Ukraine reinstate water supplies flies in the face of international law.  According to the Fourth Geneva Convention, it is Russia, as occupying state, that bears full responsibility for all that happens on occupied territory, and for all such requirements, as water and food.

The timing of the application is significant for several reasons. Russia’s Prosecutor General’s Office announced its inter-state application on 22 July.  The same body that day flouted an express ECHR ruling halting extradition and handed Belarusian sportsman Alexei Kudin over to the Belarus authorities where he faces imprisonment for taking part in peaceful protests.

Russia is currently the respondent of several inter-state cases, brought by Ukraine and by the Netherlands.  In its Grand Chamber Decision from 14 January 2021, ECHR found most of Ukraine’s complaints against Russia over violations in Crimea to be admissible.  It accepted that Russia had wielded effective control since 27 February 2014, thus essentially confirming Russia’s flagrant violation of international law.  27 February was the day that Russian soldiers without insignia, seized control of government buildings, etc. on Ukrainian territory.  Russia’s narrative is quite different, with it claiming that “the Crimean people” decided to hold a referendum and that it was merely the results of that event, on 16 March 2014 that resulted in Russia’s ‘official’ control dating only from 18 March.  Many of the violations alleged in this application are also part of Ukraine’s case against Russia before the UN’s International Court of Justice.

This is one of three inter-state cases, as well as over 7,000 individual applications, pending before the Court over events in Crimea, Eastern Ukraine and the Sea of Azov.

In November 2020, the ECHR Grand Chamber announced that it was combining Ukraine’s inter-state case against Russia over its actions in eastern Ukraine with two other cases, most importantly, that brought by the Netherlands against Russia over MH17.  The Grand Chamber hearing into this crucial case, referred to as Ukraine and the Netherlands v. Russia is scheduled for 24 November 2021.

It will likely take even longer, however Russia also has reason to expect damning evidence to be brought against it at the International Criminal Court in the Hague. In November 2020, the ICC Chief Prosecutor Fatou Bensouda stated that she had found reasonable grounds for believing that war crimes and crimes against humanity, falling within ICC jurisdiction, “have been committed in the context of the situation in Ukraine”.  Such crimes, in connection with the conflict in Donbas and with Russia’s ongoing occupation of Crimea are sufficiently grave, she writes, to warrant investigation by the ICC.

Russia’s main ‘defence’ in all these cases, as well as before the International Tribunal for the Law of the Sea, has been to deny that the particular court has jurisdiction.  Since that has not once worked, it has decided, instead, to lodge its own application with ECHR.

Most of the claims made in the application are reminiscent of the ‘criminal cases’ which Russia’s Investigative Committee kept announcing during the first months of the military conflict in Donbas, as well as of various Kremlin-funded propaganda publications.  The Russian Prosecutor General’s Office does not appear to have used a favourite accusation from back then, namely that Ukraine was guilty of “genocide of Russian speakers”, but the gist appears similar.

It is customary for a country’s justice ministry to be responsible for cases before ECHR and Russia’s Prosecutor General’s Office has only recently taken over responsibility for such cases.  This may well be one of the reasons for a plethora of charges which will surely be found inadmissible since none of the requisite procedure has been followed.  The application was even lodged in Russian which is already an infringement (with only individual applications accepted at initial stage in the applicant’s language).  The Russian Prosecutor General is clearly also unaware that there are timeframes in which applications can be made (and were not), as well as fundamental requirements that a country has been made aware – via the courts, not the propaganda media, of grievances.

In announcing their original inter-state case against Russia over MH17, the Dutch Government stressed that it was lodging it as further support for the many individual claims brought against Russia by families of the victims.  While some of Ukraine’s claims against Russia can only be considered by an international court, the evidence presented will be backed by many court proceedings or at least thorough criminal investigations; as well as by reports from international bodies, such as the Office of the High Commissioner for Human Rights, and rights NGOs.  In the only such cases where the Russian side can demonstrate that it has sought domestic legal remedies, these have either incurred international condemnation (the trial of Nadiya Savchenko) or been so totally discredited, that even a Russian court was forced to acknowledge that confessions to ‘war crimes’ had been extracted through torture (the case of Serhiy Lytvynov).  With respect to most of the allegations, such as the deaths on Maidan, on 2 May 2014 in Odesa and in Donbas, it is quite unclear why Russia is lodging them.

The main purpose would appear to be propaganda, with Russia thus trying to claim that there are valid alternative points of view.  Leonid Slutsky, the Chairman of the State Duma Committee on International Affairs, has already blasted ECHR for supposed ‘double standards’ in rejecting Russia’s demand for interim measures.  Another politician from occupied Crimea has claimed that the ECHR case will be “a test of the Court’s justice and objectivity.”

In the two most cynical cases, it is hard to imagine what propaganda benefit can be gained outside Russia’s state-controlled propaganda media.

The trial in absentia now underway in the Netherlands of three Russians, all officially former members of Russia’s military intelligence or FSB, as well as one Ukrainian, has demonstrated just how much evidence the Dutch Prosecutor and Joint Investigative Team have amassed.  This concerns not only how the Russian Buk missile launcher originated with the 53rd Anti-Aircraft Missile brigade, a unit of the Russian army, and was transported into occupied Donbas, and was then hurriedly returned across the border after the disaster.  There is also a huge amount of proof, in witness testimony, intercepted calls, etc. showing the level of Russian military and political control over all aspects of the militants’ actions in Donbas.

Moscow’s main purpose for hiring Dutch lawyers (officially representing one of the defendants, Oleg Pulatov) has almost certainly been to drag the proceedings out as long as possible.  All the ‘alternative versions’ it has tried over the last seven years to push have been dismissed by the prosecution.  It is noticeable here too that in the ECHR application, Russia is blaming Ukraine for the deaths of 298 civilians purely because it did not close its airspace.  The logic would appear to be that it should have known that Russia could send a surface-to-air missile launcher capable of hitting civilian aircraft flying at a height of 10 kilometres.  Obviously, with hindsight, it is clear that Ukraine should have closed the airspace and / or that airlines should themselves have sought permission to bypass the military zone, but as Russia’s only counter-argument against the evidence of its crime, this seems remarkably inadequate.

Various politicians in both occupied Crimea and in Russia have long been threatening ‘criminal proceedings’ against Ukraine over its refusal to legitimize Russia’s illegal occupation of Crimea by providing it with water.  Moscow uses manipulative language, such as calling this a ‘water blockade’, in order to avoid acknowledging the hard (for Russia) fact that Crimea is organically part of Ukraine and largely depends on it for water.  Any capitulation from Kyiv would simply delay the de-occupation of Crimea and allow Russia to persecute still more Crimean Tatars and other Ukrainians and even further erode the human rights situation on the peninsula.

As mentioned, the Fourth Geneva Convention is quite unequivocal on this subject and all international bodies, including the UN General Assembly have rejected any actions which would effectively help Russia maintain its aggression against Ukraine’s territorial integrity.  It seems next to impossible that ECHR will not recognize this claim for what it is – the actions of a person who has stolen somebody else’s home and then claims that his ‘rights’ have been violated when the real homeowner stops paying the bills.