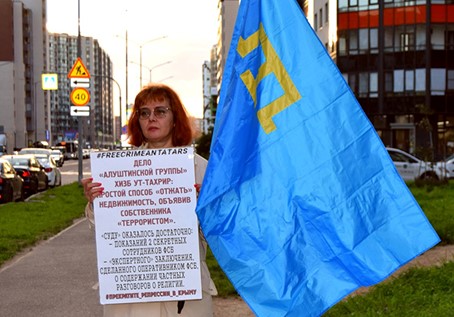 Olga Smirnova, a political activist from St. Petersburg, has been charged with ‘justifying terrorism’ over a picket in defence of four recognized Crimean Tatar political prisoners from Alushta.  This is a frightening precedent since Russia is already abusing ‘terrorism’ legislation to target civic activists and ‘religious dissidents’ in occupied Crimea.  Now it has adopted the same weapon of persecution against those who protest against entirely fictitious terrorism charges.

Smirnova is a member of the civic group ‘Peaceful Resistance. St. Petersburg’ which holds monthly protests in support of Crimean Tatars facing persecution in occupied Crimea.  The pickets are part of a campaign entitled ‘Strategy-18’ with ‘18’ hearkening back to the Deportation of the entire Crimean Tatar people from their homeland on 18 May 1944.

On 20 October, OMON riot police officers burst into Smirnova’s flat in St. Petersburg and carried out a search, removing computer equipment, hard drives, memory cards, as well as leaflets, a flag with the Ukrainian tryzub and the flag of the Mejlis, or self-governing body, of the Crimean Tatar people.  The officers took Smirnova to the Investigative Committee, however she and her lawyer, Mark Alekseyev, refused to take part in any ‘investigative procedures’ at night.  The interrogation was postponed until the following day, but did not, in fact, take place, although Smirnova and her lawyer were present.

Smirnova is facing prosecution under Article 205.2 of Russia’s criminal code, which punishes for something called ‘Public calls to carry out terrorist activities; public justification of terrorism or propaganda of terrorism’. This could carry a prison sentence of up to five years.

Smirnova was speaking out in defence of four Crimean Tatars: Lenur Khalilov, Ruslan Mesutov; Ruslan Nagayev and Eldar Kantimirov who have all been recognized by the renowned Memorial Human Rights Centre as political prisoners, and whose release has been demanded by leading European and international bodies, all of whom condemn the ‘terrorism’ charges as without any foundation.  Russia is now using the fact that a flawed prosecution and ‘trial’ sentenced the men to huge sentences (up to 18 years) to now claim that Smirnova was ‘justifying terrorism’.  In fact, there is an additional element of lawlessness about the charges against Smirnova given that the appeal has not yet been heard against the horrific sentences passed on 16 August 2021.  This is, however, of little concern to Russia which began violating the men’s right to be presumed innocent from long before the ‘trial’, with all of them added to Russia’s notorious ‘List of terrorists and extremists.’

The civic activists peacefully protest against the persecution of all Crimean Tatar and other Ukrainian political prisoners, however the charges against Smirnova are over a totally legal single-person picket on 18 August 2021 in Kudrovo (a town near St Petersburg) and the events that followed.

The video here makes it quite clear that Smirnova was fully in compliance with Russia’s repressive legislation which essentially allows only single-person pickets without ‘authorization’.  The protest was over the four men from Alushta, since it came just two days after 57-year-old Lenur Khalilov and Ruslan Mesutov (55) had both received 18-year sentences, with Ruslan Nagayev (57) and Eldar Kantimirov (41) sentenced to 13 and 12 years, respectively. The material Smirnova was holding also drew attention to the very strong grounds for believing that the persecution of Khalilov and Mesutov was linked with efforts to deprive the ‘Alushta’ Religious Community of the 19th century Yukhary-Dzhami Mosque which the community has legally occupied since 1994.

The pickets that day ended up in a police station due to the actions of a person whom the activists rather charitably call a passer-by behaving inadequately. In fact, it is hard not to see this individual (Aleksei Berezhetsky) as a typical provocateur, especially given the very serious charges that Smirnova is now facing.  Early on in the video, you can see the man trying to shout down Smirnova, bellowing at her to get out.  He then glances for a second at his mobile phone, puts it away and gets something out, namely a gas canister which he sprays at Smirnova.  During the protest he sprayed four activists, and also lodged an entirely false accusation, claiming that the activists had been standing together under one placard (which, in complete violation of Russia’s own Constitution, is illegal).

One of the activists had taken video footage throughout, which made it quite clear that they were not violating the law, unlike their attacker.  All of them were, however, taken to the police station in Vsevolozsk, without any clear explanation as to why, and spent two days in custody. It was only late in the evening after being (effectively) detained, that it became clear that the activists were all being charged with violating the rules for organizing a public event (Article 20.2 § 2 of Russia’s Code of administrative offences), with this based solely on the false testimony of their assailant.  Initially all six were accused also under Article 20.3 § 1 (for displaying a symbol of an organization which Russia has claimed to be ‘extremist’).  This, most incredibly, is over the Crimean Tatar flag (with the tamga, which is the symbol of the Mejlis of the Crimean Tatar people) which the activists were holding.  Russia is continuing to flout an order from the UN’s International Court of Justice and has not withdrawn its extraordinary 2016 ban of the Mejlis.

All of the activists were subsequently found not guilty of ‘violating the rules for organizing a public event’.  In the end, the prosecutions over the Crimean Tatar flag were sent to the court against three of the activists: Smirnov; Vladimir Shipitsyn and Asan Mumdzhi, with the hearing on this extremely worrying charge due on 9 November.

The police initially refused to accept a complaint against the activists’ attacker, Aleksei Berezhetsky.  They did, eventually, do so, however it does not appear that this resulted in any charges against him.

The criminal case now initiated against Olga Smirnova is very clearly aimed at deterring civic activists in occupied Crimea and Russia from speaking out against political persecution.  You first unwarrantedly label as ‘terrorism’ civic activism in defence of political prisoners; discussing religion and politics or otherwise peacefully practising one’s faith, and then claim that those who condemn this are ‘justifying terrorism’.