Belarusians name Russian soldiers caught on camera sending goods plundered in Ukraine to Russia Russian invaders mine children’s playgrounds leaving trail of horrific war crimes Mass graves of the Ukrainian civilians Russia claims it is not killingTerror and abductions as Russia tries to break Ukrainian resistance in Kherson and other occupied citiesUkrainian journalist Oleh Baturin feared abducted by Russian invaders in Kherson oblast Mayor of Melitopol Ivan Fedorov abducted after refusing to collaborate with the Russian invaders Russian priest arrested and prosecuted for sermon opposing Russia’s war against Ukraine Russia effectively admits it deliberately bombed the maternity hospital in Mariupol that killed three patients, including a childRussia brings grotesque propaganda to Berdiansk after Ukrainian journalists refuse to collaborate Russian invaders murder Ukrainian volunteers Impassioned appeal from Ukrainian Muslim leader in face of Russia’s war to destroy Ukraine Russia is forcing Ukrainians from occupied Crimea and Donbas to fight in its invasion of Ukraine Children among the dead after Russian invaders opened fire on fleeing civilians Russia installs its propaganda TV after seizing Kherson and imposes 15-year sentences for reporting its invasion of UkraineUkrainian survivors of the Holocaust demand Putin and Russia get out of Ukraine Russia continues its carnage, flouting binding order from ECHR to stop bombing civilians in UkraineBabyn Yar bombed by Russia, 80 years after Nazi Massacre of Ukrainian Jews Russia proposes 15-year sentences and threatens "treason charges" for telling the truth about its war crimes in UkraineRussian schoolchildren told that Russia is bombing and killing Ukrainian children in ‘self-defence’ Putin miscalculated. Russia is fighting “an army of 40 million Ukrainians”
• Topics / News from the CIS countries
• Topics / War crimes 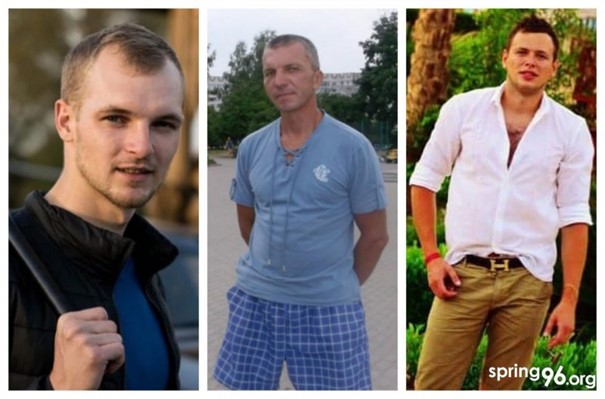 Three Belarusians are about to go on trial, with the Belarusian Investigative Committee having already labelled them ‘traitors’ and threatened the death penalty.  The three men are all recognized political prisoners who may very well have taken part in the courageous actions which helped Russia from seizing Kyiv in March this year.

The Belarus Investigative Committee announced on 29 June that they had completed their investigation into the ‘case’ of the three men from the Homel oblast, and that they were passing this to the court.  The three men  - Dzmitry Ravich (b. 1988), Dzianis Dzikun (b. 1992) and Aleh Malchanau (b. 1970) – widely known as the Svietlahorsk Partisans, are accused  of setting fire to a railway signals box during the night from 28 February to 1 March.

The renowned Belarusian human rights organization Viasna explains that on 28 February, the signals box at the Zherd-Ostankovichi Railway Station was set alight, with this stopping the lights and indicators at the station from working.  The railway track in question is on a line that leads to the Zhytomyr oblast in Ukraine, and the damage to the signals box probably helped to disrupt the movement of Russian trains, carrying technical equipment and arms for Russia’s full-scale invasion of Ukraine.

On 4 March, Dzmitry and Natalia Ravich were arrested, together with Natalia’s brother Dzianis Dzikun, his fiancée Alisa Malchanau, and her father Aleh Malchanau.  This was said to be as part of an investigation initiated into ‘an act of terrorism’ (Article 299 of the Belarusian criminal code). The two women were released, while all three men have remained in custody and were almost certainly tortured.  The Belarusian KGB shows the same contempt for the presumption of innocence as their Russian FSB counterparts, and all three political prisoners have been added to the so-called ‘List of terrorists’.

Soon afterwards, pro-regime Telegram channels produced a video in which Dzikun, looking obviously beaten, is shown ‘confessing’ to having set fire to the signals box with two other people and on instructions from ByPol.  The latter is a Poland-based group of former security service officers who resigned after the rigged 2020 presidential elections and savage crackdown on the mass protests that erupted after Aleksandr Lukashenka claimed that he had won, rather than Sviatlana Tsikhanouskaya. The Lukashenka regime has since imprisoned huge numbers of Belarusian citizens and claims that ByPol is an ‘extremist organization’.

The indictment against the three men claims that Dzikun joined ByPol in February 2022 and received instructions to put the railway infrastructure in the Gomel oblast out of action.  It is asserted that Dikun asked Ravich and Malchanau to join this alleged ‘criminal gang’.

The physical damage caused by the burning of the signals box is estimated at 55 thousand roubles.  The Belarusian Investigation Committee, like their Russian counterparts, obviously see the need to suggest that the men had to be doing this for money and claim that they were transferred approximately one thousand roubles (284 euros) for setting the signals box alight.  In fact, the amount of money is very small, and if there really had been such a transfer, it would have likely been to cover some particular expenses.

The men are all facing four charges: involvement in an ‘extremist formation’ (Article 381-1 § 3); an act of terrorism carried out as part of an organized group causing grave consequences and creating a threat to life (Article 289 § 3); deliberately damaging communication tracks causing grave consequences and also causing a danger of accidents and death (Article 308 §§ 2 and 4); and ‘State treason’ (Article 356 § 1).   The ‘justification’ for this last, most serious, charge is that the actions were allegedly to help “a foreign organization to harm Belarus’ national security”.

Very many of the railway workers and other Belarusians who have actively opposed the use of Belarusian infrastructure and territory to aid Russia’s invasion of Ukraine, would argue that it is precisely Lukashenka’s collaboration with Moscow in this war that is endangering Belarus’s national security.  Rail partisans actively opposed the Nazi invaders during the Second World War and this brave tradition was revived when Belarus was dragged into Russia’s attack on Ukraine.

On 23 April, a Washington Post report wrote about the Belarusian “railway workers, hackers and dissident security forces who had set about disabling and disrupting railway lines thus “wreaking havoc on Russian supply lines”.  The report suggested that the attacks had drawn little attention outside Belarus, although this was not quite the case.  They were certainly noticed and appreciated within Ukraine and indeed the article quotes Oleksandr Kanyshkin, the Head of Ukrainian Railways as thanking these brave and honest people who had helped Ukraine.

The damage caused to these signals boxes paralyzed the movement of trains for several days at a time, with this almost certainly helping to stall the Russian invaders and thwart the planned taking of Kyiv.

The article quotes Emily Ferris from the Royal United Services Institute who points out that it is hard to say “how much of the chaos can be attributed to the sabotage and how much to poor logistical planning by the Russians”, however it was surely important that the loss of automatic signalling meant that trains had to slow to a crawl and the number of them needed to be severely restricted.

Belarusian resistance has been seen in other ways as well.  It is thanks to Belarusian activists, for example, from Belaruski Hajun, that the Russian invaders who sent vast amounts of Ukrainian goods plundered from homes in the Kyiv oblast were shown on video and even named.  In many cases, these individuals were likely implicated in the horrific war crimes that came to light after the Russians were forced to retreat.  Belarusian activists also help by circulating information about Russian troop movements through Belarus.

The Belarusian regime are intent on crushing all such resistance and the already huge number of Belarusian political prisoners has risen over risen months to include people imprisoned on ‘extremism’ charges for circulating information about the Russian military.  They include Iryna Abdukeryna, a former teacher from Hojniki (in the Gomel oblast) who is charged with having taken photos of a Russian military convoy and passed them to Belaruski Hajun.  At least eight believed railway partisans have been arrested, and the regime is clearly trying to come down particularly hard on them, with recent changes to the criminal code significantly broadening the possibility of using the death penalty.  According to lawyer Pavel Sapelko,  the Investigative Committee are bluffing when they threaten the Svietlahorsk Partisans with death sentences, since the relevant changes to the criminal code only came into force on 29 May 2022, long after the actions that the men are accused of and their arrest.   He does, however, add that “the relentless blood-thirsty rhetoric of the regime’s resources suggests that the enforcement bodies are awaiting this opportunity with impatience”.