Belarusian rail partisans who helped save Kyiv from the Russian invaders threatened with death sentences Belarusians name Russian soldiers caught on camera sending goods plundered in Ukraine to Russia Russian invaders mine children’s playgrounds leaving trail of horrific war crimes Mass graves of the Ukrainian civilians Russia claims it is not killingTerror and abductions as Russia tries to break Ukrainian resistance in Kherson and other occupied citiesUkrainian journalist Oleh Baturin feared abducted by Russian invaders in Kherson oblast Mayor of Melitopol Ivan Fedorov abducted after refusing to collaborate with the Russian invaders Russian priest arrested and prosecuted for sermon opposing Russia’s war against Ukraine Russia effectively admits it deliberately bombed the maternity hospital in Mariupol that killed three patients, including a childRussia brings grotesque propaganda to Berdiansk after Ukrainian journalists refuse to collaborate Russian invaders murder Ukrainian volunteers Impassioned appeal from Ukrainian Muslim leader in face of Russia’s war to destroy Ukraine Russia is forcing Ukrainians from occupied Crimea and Donbas to fight in its invasion of Ukraine Children among the dead after Russian invaders opened fire on fleeing civilians Russia installs its propaganda TV after seizing Kherson and imposes 15-year sentences for reporting its invasion of UkraineUkrainian survivors of the Holocaust demand Putin and Russia get out of Ukraine Russia continues its carnage, flouting binding order from ECHR to stop bombing civilians in UkraineBabyn Yar bombed by Russia, 80 years after Nazi Massacre of Ukrainian Jews Russia proposes 15-year sentences and threatens "treason charges" for telling the truth about its war crimes in UkraineRussian schoolchildren told that Russia is bombing and killing Ukrainian children in ‘self-defence’
• Topics / War crimes 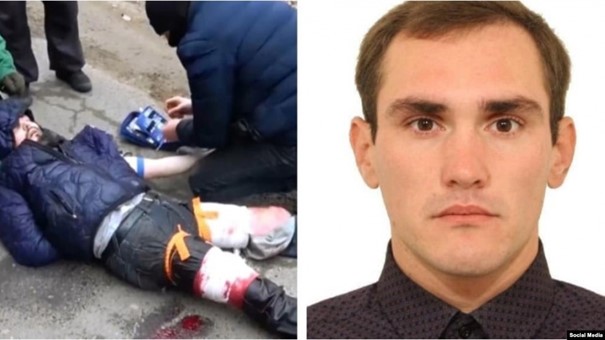 Vitaliy Melnik when they shot him in the knees during his arrest, and profile Photos posted by the Viasna Human Rights Centre

A ‘court’ in Belarus has sentenced Vitaliy Melnik to 16 years’ harsh regime imprisonment in reprisal for the Belarusian’s role in obstructing Russia’s attempt to seize Kyiv.  The 40-year-old from the Minsk area is believed to have been one of the courageous 2022 ‘rail partisans’ to whom Ukrainians owe a debt of gratitude. Their role in causing damage to signal boxes, etc., helped to disrupt the movement of Russian trains, carrying technical equipment and weapons for Moscow’s full-scale invasion of Ukraine.  Melnik is one of many who have paid a high price for their courage.  He has already spent nine months in custody, after the enforcement officers shot him in both knees while taking him into custody.

The Belarusian police reported on 1 April that they had seized a 40-year-old suspected of deliberately causing damage to a signals box.   A video-montage was posted on Telegram which showed enforcement officers running up to a car and breaking the glass.  In the next image, a person could be seen lying, head down, with both legs in bandages.  The Belarusian prosecutor general claimed that his car, which was only ‘searched’ after Melnik was shot in both knees, had contained weapons, etc., and that the police had been justified in shooting him “as there was a real risk of armed resistance.”  The allegations about supposed weapons were coupled with the claim that the arrested man had “insulted” Lukashenka on social media.

The prosecutor general announced at the beginning of November that the case had been passed to the court.  It was asserted that Melnik had set fire to a signals box, thus disabling the signals system, and that this had caused “a real danger of grave consequences in the form of an accident, damage to a train, the death or injury of people.”

This may, in normal consequences, be true. Such activities were, however, fully justified during the Second World War when carried out by the original ‘rail partisans’ in resistance to the Nazi invaders.  In 2022, the ‘real danger’ that the new rail partisans posed were to Russia’s criminal war of aggression against Ukraine which the regime of Aleksandr Lukashenka was abetting.

Other sentences have also been reported.  On 16 September, 50-year-old railway employee Sergei Konovalov from Vitebsk was sentenced to 15 years maximum security imprisonment by ‘judge’ Yevgeny Burunov, from the Vitebsk regional court.  He too was accused of having disabled the signalization, with this, however, claimed to fall under two ‘terrorism’ charges and the article on inciting enmity.  In this case, the Society of Railway Workers of Belarus reported that Konovalov had been arrested after being denounced to the Belarusian KGB by the work ideologue and that he had not actually had any access to the tracks.

On 17 October, Sergei Glebko from Stolbtsy was sentenced by the Minsk district court to 11 years maximum security and a fine. He had been detained during the night from 1 to 2 March when he and his wife allegedly set fire to logs on the tracks in order to obstruct the movement of trains with Russian military technology and ammunition.

Back on 29 June 2022, the Belarusian investigative committee reported [that it had ended its investigation into the activities of three Belarusians from Gomel oblast and that the case was now headed for the court.  Dmitry Ravich (b. 1988), Denis Dikun (b. 1992) and Oleg Molchanov (b. 1970), known as the Svetlogorsk Partisans, were accused  of setting fire to a railway signals box during the night from 28 February to 1 March.  The investigative committee report labelled the men ‘traitors’ and said they could face the death penalty.

The damage caused on 28 February to the signals box at the Zherd-Ostankovichi Railway Station almost certainly helped disrupt the movement of trains carrying Russian weapons of death and destruction to Ukraine.  The men face ‘extremism’ and ‘terrorism’ charges, as well as that of ‘state treason’, with it claimed that the men were “to help a foreign organization to harm Belarus’ national security”.

As reported earlier, it is Lukashenka’s pandering to Russia in its war of aggression against Ukraine that is endangering Belarus’s national security and the country’s future.