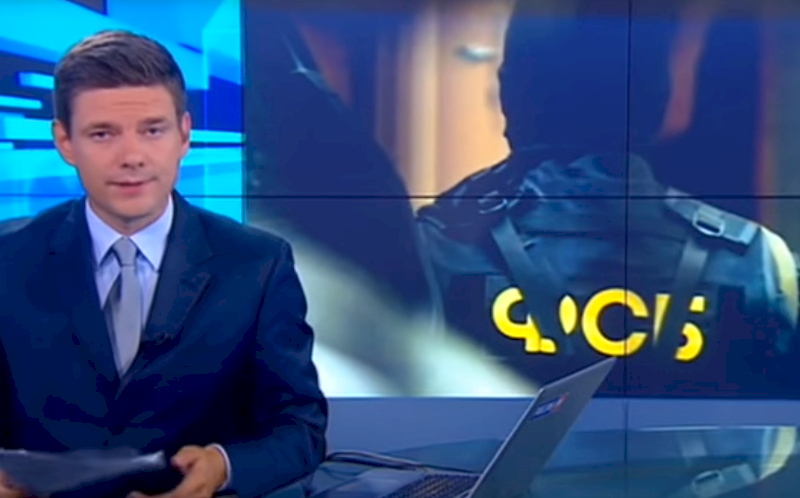 The FSB in Russian-occupied Crimea is looking for ‘saboteurs’, but not at all in the way that security services in other countries do.  Moscow and its enforcement bodies are desperate for ‘Ukrainian enemies’ to justify the rising militarism and distract from the dramatic price increases and slump in tourism and agriculture since annexation.  The FSB also need to arrest ‘saboteurs’, ‘terrorists’ and ‘extremists’ for their statistics, with this ensuring them bonuses and promotion.

All of the above means that when there aren’t real saboteurs or terrorists to be caught, you invent them.  You use a fictitious ‘terrorist plot’ to arrest four opponents of Russia’s invasion and sentence one of them, Ukrainian filmmaker Oleg Sentsov to 20 years for quite literally nothing and civic activist Oleksandr Kolchenko to 10 years for a small part in the throwing of a Molotov cocktail at the deserted office of a pro-Russian organization.

The FSB were busy with other forms of political persecution during the next two years, and it was only in August and November 2016 that the next waves of arrests for supposed ‘sabotage plots’ began.

The lack of any acts of sabotage linked with all these subsequent arrests would not necessarily prove the absence of criminal plans.  It would, however, warrant close attention to indications that the men’s ‘confessions’ had been made under duress and to grave violations of their right to a fair trial.

None of them mentioned each other, and simply repeated claims about sabotage plans on instructions from Ukraine’s military intelligence.  Panov, the first to be seen, showed obvious signs of having been beaten.

The men were filmed in rooms with only an unnamed FSB officer outside the camera’s view   There was nothing to indicate that they had seen a lawyer, nor that they had been allowed any contact with relatives, etc.

It took intervention from the European Court of Human Rights before Russia allowed Panov to see a lawyer.  He immediately retracted all testimony as extracted by torture. The same allegations of torture have been made by Prysich and Zakhtei.

A further damning detail is that the subsequent convictions of both Suleymanov and Prysich bore little or absolutely no relation to their confessions.

It was also Panov, who held out against pressure to accept guilt for promises of a shorter sentence, who got the longest 8-year term of imprisonment (details here).

The FSB had learned two lessons from its resounding failure to convince an international audience that Ukraine had been planning ‘incursions’ on its own illegally occupied territory.  It had been a mistake to arrest men who had never set eyes on each other, as alleged conspirators.  It was also unwise to make the supposed ‘mastermind’ Panov, since his family was safely in mainland Ukraine, removing one of the levers the FSB use to force prisoners to ‘cooperate’.

The first three men from Sevastopol arrested  on November 9, 2016 - internationally known experts on the Black Sea Fleet, Dmytro Shtyblikov and Oleksiy Bessarabov and retired Ukrainian military officer Volodymyr Dudka were good friends.  The FSB claimed that they were  “members of a sabotage – terrorist group of the Ukrainian Defence Ministry’s Central Intelligence Department” who were planning acts of sabotage on military and other infrastructure”.  Two much younger Crimeans  - Oleksiy Stohniy and Hlib Shabliy were arrested 10 days later, with this followed on Nov 24 by the arrest of Leonid Parkhomenko, a long-retired Black Sea Fleet captain.  Nothing has been heard since of Parkhomenko, however both Stohniy and Shabliy have since been convicted of charges that have almost no connection to the sabotage that they ‘confessed to’.  In Stohniy’s case, the signs of beating on the FSB video were so obvious that the FSB came up with a story to try to explain them. His wife was able to reach mainland Ukraine, with her younger daughter, and has refuted even the alleged time of day that her husband was supposed to have been captured.

The FSB report on Nov 10, 2016 after the arrest of Shtyblikov, Bessarabov and Dudka, asserted that “a powerful explosive device, weapons and ammunition, special communications devices and other material evidence” had been found.  Similar claims were made in May 2014 after the arrest of Sentsov and the others, and then never mentioned again.

An FSB operational video was circulated to the Russian media, with this showing Shtyblikov being roughly pinned down and handcuffed by FSB officers, and then in his home.  The camera focused on the Ukrainian trident, a Ukrainian flag on the wall, and Dmytro Yarosh’s ‘Right Sector’ business card.  Russian channels told their viewers that this was from the nationalist movement banned in Russia, but chose to remain silent about the ‘Yarosh business card’s’ extremely specific history.  The card had been first produced by Russia as ‘incriminating evidence’ in April 2014, after supposedly being pulled quite intact from a totally gutted out car.  The absurdity of the claim led to an Internet storm of hilariously implausible ‘findings’ of the card. The ‘incriminating’ weapons shown on the video appear to have been airguns, from Shtyblikov’s sporting hobby.

Shtyblikov was placed under extremely intense pressure and was prevented from seeing an independent lawyer.  Under such conditions, he eventually agreed to admit guilt and was sentenced on 16 November, 2017 to five years’ imprisonment after a ‘trial’ lasting just minutes (details here).

Bessarabov did not have a lawyer at first, and it is now unclear whether the person representing him is by choice or an FSB appointment.

Both Dudka and Bessarabov have rejected the charges although they have doubtless been threatened with a longer sentence in retaliation (as were Sentsov and Panov).

Russia is claiming the existence of a ‘military secret’ as excuse for holding the men’s ‘trial’ behind closed doors.  Given the ‘proof’ thus far demonstrated, such as the Yarosh business card, and airgun, it seems likely that there are no good grounds for the secrecy.  Even the defence’s application for photographs to be taken during the hearings was rejected, with it claimed that this was for the safety of participants.

The first attempt to begin the ‘trial’, on 4 April, was aborted due to the multiple discrepancies in the indictment.

The next try was on 2 August, though this has also now been deferred.  At that hearing, seven ‘witnesses’ for the prosecution were scheduled to be questioned, but only two turned up.  One was there essentially only to explain what the theoretical damage of an apparently theoretical act of sabotage could have been to the oil plant he was in charge of.

The other witness for the prosecution essentially exposed the FSB’s methods, by denying that there had been the mobile telephone which was supposed to have been found during the search.  The person said that Dudka had not had this telephone, and suggested that it could have been planted by the FSB during the search, which, he noted, had not found any charger for the phone.

Dudka had retired from the Ukrainian Fleet back in 2009 on health grounds  He had continued to work for the Ukrainian Emergency Services, using his professional skills to locate unexploded mines from WWII, and then carried out the same work for the analogous Russian agency after annexation.

He had recently  become a grandfather and spent all his free time with his son and granddaughter, yet is charged with having planned acts of terrorism against vital infrastructure in Crimea.

Petro Dudka reports that his brother looks shocking and has lost a huge amount of weight while held in the appalling conditions of the Simferopol SIZO [remand prison].  He has problems with a stomach ulcer, with his prostate and has also developed a heart condition since his imprisonment almost two years ago. His son tries to get medicine to him, but it is probably not passed to him immediately.

Petro Dudka notes that you cannot complain without risking the SIZO staff making your life even more unendurable.

During a recent interview on Krym.Realii, a listener called in, with the following succinct assessment of the situation.

“After annexation, there probably wasn’t such a quantity of security and various other federal punitive bodies in any region as per one square metre of Crimean land. And they need to eat, drink, get rank, bonuses.  So as to earn the bread they eat, they assign so-called ‘saboteurs’.  Arbitrarily, merely so that they fit some objective or subjective criteria or other”.