Russian Deputy Defence Minister: ’Why should we be ashamed of Stalin?’ 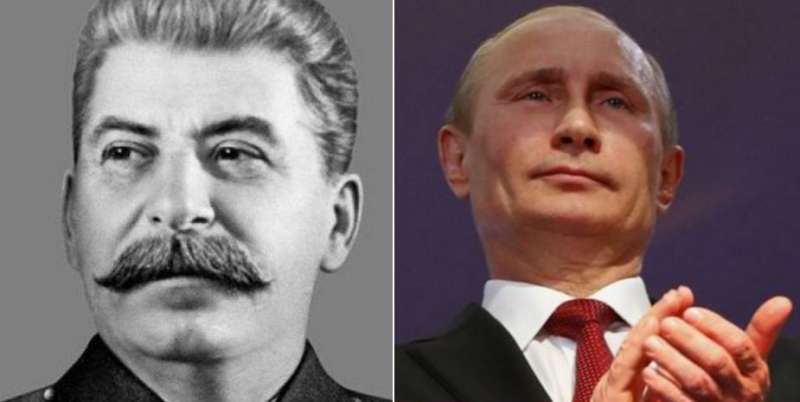 While Russian President Vladimir Putin’s face has – for now – been removed from a mosaic in the new Russian Defence Ministry Cathedral, mass murderer Joseph Stalin remains.  This is our history, the Deputy Minister of Defence claims, and what is there to be ashamed of?

If you listen to Andrei Kartapolov and watch only Russian state-controlled media, then this would all seem quite normal.  In Kartapolov’s words, this was a man who “took upon himself all the burden of the war, made the most important decisions.  Yes, and in general reinstated religion. Why should we be ashamed of him?  Because some people from abroad tell us to?  We will decide ourselves who to honour, who to portray on frescos. They remove monuments to the victors because they are afraid of historical truth, they are afraid of dead Soviet marshals and soldiers. At the same time, they understand how disgustingly they are behaving and how great the feat of the fighters and commanders who perished so that they could now live.  They are tormented by shame for their inadequacy because they are fighting memorials.  We will not do this.  We are a great nation and we have the right to our heroes”.

The Deputy Defence Minister’s interview was published two days before the Russian prosecutor in Tver ordered the dismantling of memorial plaques honouring the victims of Stalin’s Terror and of the Katyń Massacre, when the Soviet NKVD, on the orders of Stalin’s deputy, executed 22 thousand Polish officers and others, taken prisoner after the USSR invaded Poland on 17 September 1939 (details here).  Those memorials, like the mass graves of victims of the Terror at Sandarmokh and the Gulag museum at Perm-36, are destroyed or the facts about them distorted in Putin’s Russia with impunity.  It is the memorials, erected by force, in the countries that the Soviet Union liberated from the Nazis, only to subjugate, that Russia is now defending.

As the current regime is defending Stalin, a sadist, mass murderer and invader, who collaborated with Adolf Hitler for close on the first two years of World War II.  Had it not been for crucial material, petrol, etc. that the USSR was supplying to Nazi Germany right up to the latter’s invasion of Soviet Ukraine on 22 June 1941, Hitler might have found it harder to overrun so much of Europe. Had it not been for Stalin’s insane, as well as evil, purges of the military on the eve of the War, and even after the Nazi invasion, far less Soviet soldiers and civilians would have perished in the War.

These are facts, however few Russian these days have much chance of learning them.  It is the myth around the Soviet war effort under the wise command of Stalin that Russians learn about.

Nor is it particularly safe to try to establish the truth.  Reposting a picture in which Putin is likened to Hitler because “both began with the Olympics”; “both invaded Ukraine” and “both shamed their countries before the entire world” can get you jailed for three days in Putin’s Russia, while reposting the correct statement that the USSR invaded Poland in 1939 can lead to a huge fine.  Not to mention the fact that Yuri Dmitriev, historian of the Terror, has been in prison for three and a half years, as was Sergei Koltyrin, another historian, researching Stalin’s crimes, until his death on 2 April 2020.

Systematic ‘rehabilitation’ of the bloody dictator began back in 2007.  After a speech given by Putin to teachers in June 2007, a manual by Alexander Filippov appeared, describing Stalin as “one of the most successful leaders of the USSR”.  Stalin’s aim in both domestic and foreign policy, it was stated, had been the restoration of the Russian Empire.  The purges had “led to the formation of a new governing class, able to cope with the task of modernization given the shortage of resources – unwaveringly loyal to the upper echelons of power and irreproachable from the point of view of executive discipline”.  It was material like this that by October that year made Putin welcome “certain positive moves”,  noting that “up till quite recently we read things in textbooks that made our hair stand on end…”

In July 2015, as a new Stalin museum and monument were unveiled in Tver, an article was published by Russia’s Culture Minister Vladimir Medinsky in which he effectively defended Stalin’s role in the country’s history.  In August 2016, Putin appointed Olga Vasilyeva, an apologist for Stalin, as Education Minister.

Now it seems clear that other apologists head the Russian Defence Ministry, since Katapolov would not be speaking like this if he did not have the support of his superiors.  It is immensely disturbing that all of this monstrous lie has the support of the hierarchy of the Russian Orthodox Church, which is tolerating the desecration of a Cathedral with images of Stalin and glorifying Russia’s invasion and annexation of Crimea.  Although the publicity over the ‘Crimea is ours!’ mosaic, with Putin, Defence Minister Sergei Shoigu and Russian invaders of Crimea, led to the mosaic being removed from the wall, this is likely only temporary, and another image, celebrating Russia’s illegal annexation of Ukrainian territory, is to replace it.

Katapolov’s assertion that Stalin ‘reinstated religion’ is a cynical lie.  Yes, in 1941, after understanding that his ally Hitler had “treacherously” betrayed him by invading the USSR, Stalin addressed the Soviet people he had been persecuting and murdering with the words “Brothers and sisters”, and he allowed churches to reopen.  The churches that his regime had destroyed, while also murdering hundreds of thousands of religious figures, or sending them to labour camps..

While the Deputy Defence Minister claimed that the Cathedral’s location (in Moscow region) marks the place where the Nazi advance on Moscow was stopped, the site is also linked with Russia’s annexation of Crimea. Kubinka is where the 46th paratroopers brigade which seized control of the Crimean parliament on 27 February 2014 is based.

Although there were always Crimean communists (in particular) who glorified Stalin, it is under Russian occupation that the mass murderer, guilty for the Deportation of the entire Crimean Tatar people, Holodomor and countless heinous crimes, is increasingly seen on posters, etc. Within a year of annexation, a monument to Stalin and the leaders of Great Britain and the USA had been erected in the place where the men signed the Yalta Agreement, and a memorial plaque had been established on a façade in Simferopol.   This is while Crimean Tatars have been prohibited from holding remembrance events to honour the victims of the Deportation, a horrific act of genocide.