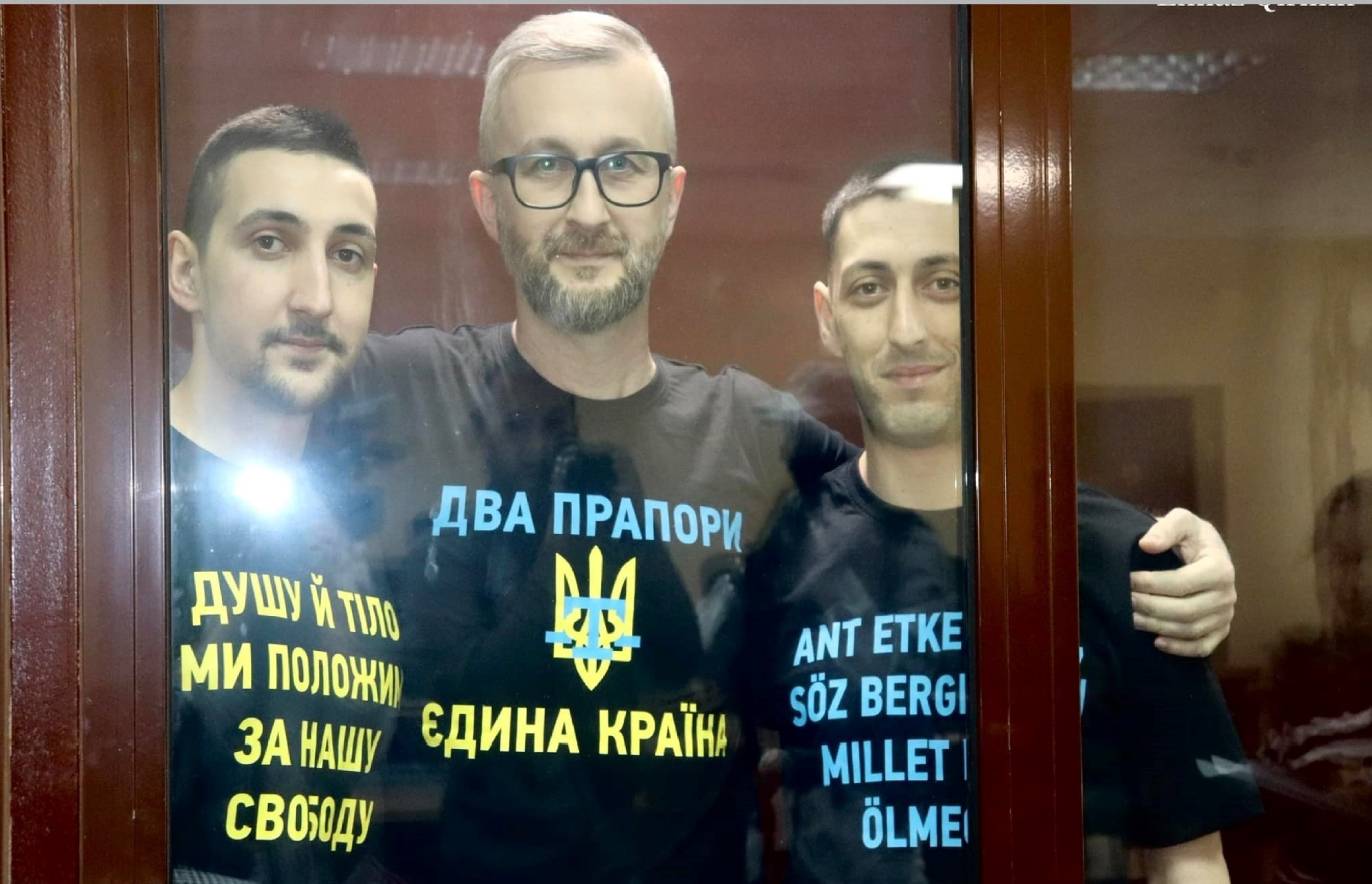 In a brief statement after the sentence, Nariman called it Russia’s latest crime against Ukrainian citizens. He said it reflected Russia’s “attitude to our shared wish to live freely, in our own, democratic country.”

This parody of a ‘trial’ has been condemned by the international community, not least because Dzhelyal’s arrest on 4 September 2021 was so evidently in revenge for his participation in the inaugural meeting of the Crimea Platform ten days earlier.  Everything about the abduction-like arrests and accompanying mass repression and torture, as well as the surreal indictment, made it clear six months before Russia’s full-scale invasion of Ukraine that Moscow had abandoned any pretence.

During his final address on 29 August, Nariman told these ‘judges’ the following: “It is not on us that you will pass sentence.  This is your sentence. On Judgement Day you will not be helped by any falsification or false testimony.  And when just punishment for your injustice comes, perhaps you will remember our three names. Though there will probably be far more names.”

This was a political trial and, as such, the ‘judges’ doubtless passed a sentence determined at higher level.  This does not, however, absolve them of guilt, and each played an active role in preventing the defence from demonstrating the glaring flaws in this case, and ignored clear evidence that testimony had been obtained through torture.

Nariman Dzhelyal is the highest-ranking member of the Mejlis, or representative assembly, of the Crimean Tatar people who was still living in occupied Crimea after Russian used repression and forced exile against other Crimean Tatar leaders.  During the above-mentioned final address, Dzhelyal made it clear that he had always known that they would come for him.  Indeed, he noted then that, had the Crimea Platform not come first, he would have certainly been arrested for his open opposition to Russia’s total invasion.

The inaugural meeting of the important Crimea Platform international initiative was held in Kyiv on 23 August 2021.  It was attended by EU President Charles Michel and high-ranking representatives of 45 countries, including the USA, Canada and individual EU states.  All the speakers, like Charles Michel, affirmed their non-recognition of Russia’s occupation of Ukrainian Crimea and their willingness to “stand tall against any violations of international law.”

Russia and its puppet occupation regime in Crimea had reacted with hysteria from the outset and openly threatened retaliation, including against Nariman Dzhelyal if he took part.  He had always provided an important voice in defence of all Ukrainians persecuted under Russian occupation and refused to be deterred either from attending, or from returning home after the event.  The FSB came for him just ten days later.

Five Crimean Tatars were effectively abducted after raids of their homes on 3 or 4 September 2021, with no information about their whereabouts until late on 4 September.  Two of the three men seized during the night from 3-4 September, namely Asan Akhtemov and his cousin, Aziz Akthemov, were only finally able to see proper lawyers almost ten days later, after the European Court of Human Rights [ECHR] intervened.

They immediately retracted all ‘testimony’ extracted during the period they were held incommunicado and gave shocking accounts of the torture used to obtain this.  As well as electric shocks and other physical torture, the FSB also threatened reprisals against the men’s families.  It is clear, both from the men’s testimony and from the video posted by the FSB of the supposed ‘confession’, that the FSB-appointed ‘lawyers’ Violetta Sineglazova and Oleg Glushko were well-aware of the methods being applied against the men and said nothing

Both Eldar Odamanov, abducted in the morning of 3 September, and Shevket Useinov, seized during the following night, were held incommunicado until 5 September, before being jailed for 10 and 15 days on absurd charges, quite unrelated to the armed raids on their homes.

As was feared from the outset, both Odamanov and Useinov had been forced into provided so-called ‘testimony’ against Dzhelyal and the Akhtemovs, none of whom they knew personally. During the ‘trial’, however, both men described the illegal methods of duress that the FSB had used. There are no grounds for believing that the prosecution was not aware of this, and indeed the prosecutor had repeatedly tried to get Odamanov’s ‘testimony’ simply read out in court, without him being present.

There seem legitimate grounds for doubting that the minor damage caused to a gas pipe in Perevalne on 23 August 2021 was, in fact, an act of sabotage.  The report on that day suggested that “the mechanical damage to the gas pipe had, possibly, arisen as the result of illegal actions by unidentified individuals”, but the criminal investigation launched was under Article 167 § 2 of Russia’s criminal code (‘deliberate destruction or damage to property’.  There was no further mention of this damage, and to this day no photos, etc. have been made public.   The gas pipe in question was not on any central circuit and could be fixed relatively easily, and without any particular inconvenience given that it happened in summer.  All of this is yet further reason for doubting the FSB claims that the alleged ‘sabotage’ was planned by Ukraine’s Military Intelligence together with the Mejlis.  There was also no reason at all for Ukraine to time a supposed ‘attack’ so that it coincided with the Crimea Platform meeting.

Aside from this dubious ‘act of sabotage’, the indictment relies solely upon ‘testimony’ that was either retracted as obtained through torture or, in the case of Odamanov and Useinov, repeated in court, but with an account of the illegal coercion applied.  There have also been public statements from two Crimean Tatars who found the courage to refuse to collaborate with the FSB and provide false testimony.

The charges against Dzhelyal and the Akhtemovs became more and more surreal, with the first increase in severity coming immediately after the Akhtemovs ignored the threats from the FSB and retracted their testimony as obtained through torture.

The men were all accused of carrying out an act of sabotage as part of an organized group (Article 281 § 2a), and of the illegal purchase, transfer or possession of explosives as part of an organized group (Article 222.1 § 4).  On 8 November, an additional charge was added, of smuggling an explosive device, as part of an organized group (Article 226.1 § 1); and of ‘causing considerable material damage to the Crimean gas network (to the tune of around 1,425 USD).  Nikolai Polozov, one of the lawyers representing Dzhelyal reported in December that the indictment now claimed that (the alleged) cut in gas to the military unit constituted “an attack on the Russian Federation’s defence capabilities”.  Polozov noted that the indictment was reminiscent of the material used during Stalin’s Terror.

There was absolutely no material evidence to back the charges against the three men.  There remains no proof even of the alleged damage to the gas pipe.

There is testimony retracted by two defendants who gave it while being held incommunicado and prevented from seeing independent lawyers.  There is the testimony of two men abducted at the same time, and who confirmed in court that they had given it because of the use of illegal methods of duress.

There were, finally, three ‘secret witnesses’, whose ‘testimony’ could not be verified. As in all such cases, no grounds were provided to justify anonymity, yet the ‘court’ not only allowed it, but also obstructed the defence from demonstrating the flaws in the supposed testimony (details here).

Russia began using fake ‘sabotage’ charges against those who opposed its invasion and annexation of Crimea back in 2014.  Since that time, it has also applied particularly ferocious repression against the Mejlis and against Crimean Tatars in general, for their unwavering identification with Ukraine and opposition to Russian occupation of their homeland. It was no accident that, during the reading of the sentence on 21 September, Nariman Dzhelyal was wearing a T-shirt in the colours of the Ukrainian (and Crimean Tatar flags), with the symbols of both flags merged, and the words in Ukraine: Two flags, a united people.  Asan’s T-shirt had the words of the Ukrainian national anthem: “We will lay down body and soul for our freedom”.

It is now five and a half years since Russia was expressly ordered by the UN’s International Court of Justice to revoke its extraordinary ban on the Mejlis.  Instead of complying, Russia has fabricated at least three political trials aimed at discrediting the Mejlis.  In his final address, Nariman gave a stark assessment of Russia’s motives for his show trial.

““The criminal charges against me, an activist of the Crimean Tatar national movement, a delegate of the Qurultay [National Congress] and First Deputy Head of the Mejlis of the Crimean Tatar people, are aimed at outlawing and labelling as ‘terrorist’ the entire system of representative bodies of the Crimean Tatars.  And, in this way, opening the way to mass repression against the indigenous people of Crimea.”

These horrific sentences will, of course, be appealed, but international protest over this outrage is vital.