His mother was shot, and the place of work was destroyed — Russian occupation harshly affected the life of Trostianets resident Serhii PentinShe said goodbye to life when the airstrikes made the houses collapse like a house of cards‘I believe the war will end soon, and everything will be fine’‘My husband and son were injured during an airstrike’‘I fell face down into the glass and covered my head with my hands’‘My brother and weakened mother were left in the middle of the street’ — stories from Izium‘In Sloviansk, we watched out of the window as people held up the train tracks with crowbars so we could pass through’ She was about to turn 53. A citizen of Trostianets speaks about his wife’s detention and murder‘Five people were killed there, including a pregnant woman’‘Grandfather was thrown a hundred meters away by the blast wave’‘There was nothing left of the neighbor, only shoes...’
• Voices of war

‘For all the evil they have done, they will be held accountable before God!’

My name is Yavorska Zoia Ivanivna, I am 71 years old. My parents used to live in Borodianka, but my husband and I lived in Kyiv. We worked there. However, we returned to our birthplace, and we've been living here for twenty years.

— Did you expect a full-scale war?

— I didn’t expect that there would be a war! I didn't anticipate it. Although my husband said there would be a war, it’s on its way. He worked all his life in the Ministry of Internal Affairs. Our position was different, and he knew many things he did not always discuss. We have seen the inadequacy of the Russian rulers for a long time. Therefore, we knew that something terrible could happen at any moment. But we never dreamed they would reach Borodianka ... There was an idea that the war would last two or three days, maybe four or a week. I did not think there could be a full-scale invasion. We drove away such thoughts. There was an internal feeling that perhaps they would attack from the east, from the south, but not from the north. Even in terrible dreams, it was not thought and not guessed that we would experience such a thing here.

The eldest granddaughter called on the 24th at six in the morning. They lived in Hostomel, where they bought an apartment recently and settled.She called and said: “Grandma, do you know that we are already at war?” “What war? We didn't hear anything.” — “Real war. Pack up quickly.”

Where would we go? I called my daughter, then another one. They were in Kyiv, but on the 24th, they fled to Borodianka. We thought it would be quieter here. But, unfortunately, they came with our grandchildren. The eldest granddaughter and her husband went immediately to Vinnytsia, to her husband's parents, but the rest were here. The eldest daughter was in her summer house. When it started to “thump” in Hostomel, we heard all the explosions very well. Bucha, Hostomel — we heard everything and saw a glow. Explosions, explosions, explosions, and constant cannonades. When there were explosions with flashes, it was horrifying. We ran to the cellar with the children and grandchildren. We had two with us: 10 and 13 years old. 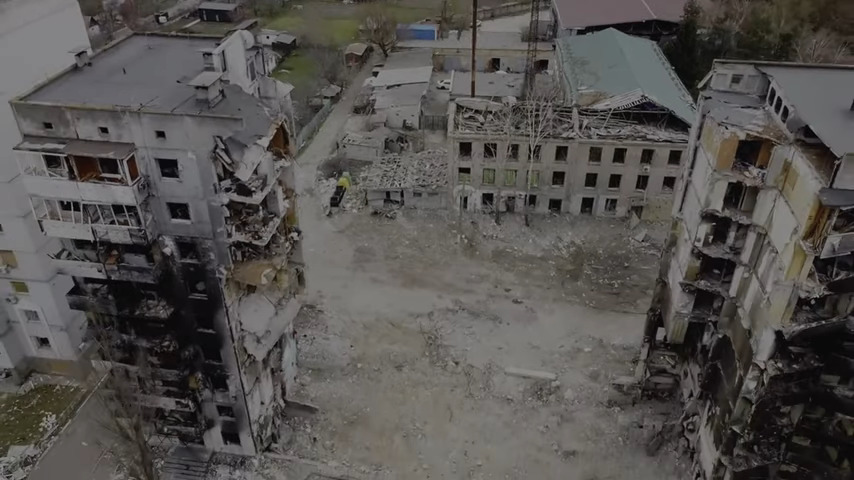 On 1 March, the bombs flew. We were sitting in the house, and the grandson was at the computer; he looked up, and I said: “Run!” I heard a whistle, then something flew and fell.

My husband came in and said: “Let's run and hide!” So we rushed out (we have two entrances to the house): my husband and I from one side, the kids from another. The youngest was the first to the cellar, and the daughter had just run out onto the porch. It looked like someone had taken her, lifted her by the hands, and put her down. There was a shock wave. All the windows on the veranda were yanked out completely.

It looked like a vacuum bomb because the roof on the other side went up and down. The tiles raised and lowered.

There was a feeling that hedgehogs settled on our roof. Everything was in needles. Then we decided that the children would not stay here. Then, after the bombing, the eldest called: “We have a route to get out of here.” Russians were everywhere. A lot of tanks were moving in the center of the city. It was 1 March.

— Where did the children go?

— No! We did not leave, although we were offered. We gave the children gasoline, so there was a full tank. We gave them cash as well. On the 24th, when the children arrived, we went to the bank to withdraw some money. There was nothing in the ATMs. We packed bags with food for them, but how could we leave everything? Even earlier, my husband and I said that we would stay.

We did not want to go. We are seventy. Yes, we wanted to live, but we would not abandon our farmstead, nor two cats, a dog, chickens, and the rest. We put our souls into this place. How could we break away and leave?

We were delighted when the children left at seven in the morning on the 2 March. And at eight, new air raids began. My husband and I sat in the cellar and were happy that the children had left. That's how it was ... There was not even a thought about departing. My husband suggested I go with the children, but I said: “How am I going to go without you? You and I are one. We are only together! ”

— There was no light. Electricity, gas, and water were gone. Before that, the children collected 50 liters of water for us. We prayed that they would get somewhere safe and get in touch. But there was no light, and the phones were dying. We turned them on only to report that we were alive. And then the connection was gone. I told my children, “If there will be no connection, do not worry about us. Everything will be OK. There were many positive things in our life. You and the grandchildren are the most significant ones, which is wonderful. The only thing that matters is to support each other.”

— What was the situation in the village?

— We didn't go there, but we heard a lot. My classmate's nephew was killed. A few guys were driving a car, and they were shot. Her sister buried her very young son... Then they took the neighbor “to the pit”. Russians robbed and took everything. It was impossible to get out beyond the gates. As soon as my husband and I went out to look at my daughter's dacha, helicopters flew. They flew very low. I had a feeling that they would touch the wires. Sometimes, there were cars with the Russian military, frequent shelling, and “Grads” (rockets designed in the Soviet Union) flying. 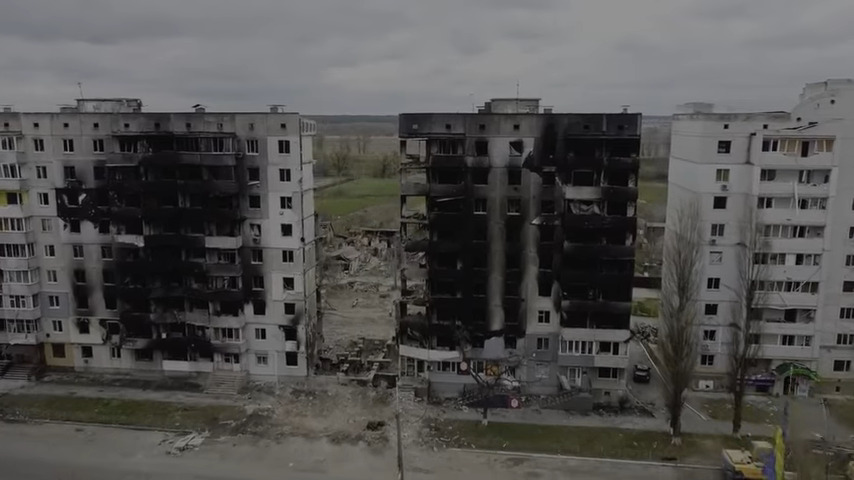 Borodianka, the aftermath of Russian bombings

— How long was Borodianka under occupation?

— A month. Not even from the 1 March, it was occupied earlier, but they came to us later. We have a remote street, and they were afraid to divert from Central. They didn't roam at night, only in the morning. We had a battery-operated radio and were glad there was some connection. Once, it was terrifying when they knocked on the gate. Ours is easy to open, and they come to us. The car stopped: either an armored personnel carrier or something else. There were a lot of them. They went into the yard and began the interrogation. The officer introduced himself. I do not remember the rank or the surname, but I remember the name — Alexander. “Don't be afraid of us (Russians).” He was Russian: there were three Russians and five Buryats. He said immediately: “Lower the machine guns.” They all dropped their weapons.

He stood behind the garage, then sat down. He began to ask how we were, telling us not to be afraid as they would not do anything wrong. I lowered my eyes and thought: “Yes if I had the opportunity, I would kick you out of here. I simply don't have that option.” They started asking about the neighbors: was there anyone from Terroborona (Territorial Defence Forces)? Or maybe one of the military. I thought: “Of course, I’ll tell you now that my husband is almost a military man.” I started talking, lowering my eyes, because ... You know, a lump of hatred rose in my throat — some inhuman hatred. There was a desire to through them out, but there was no way. And I was afraid for my husband.

— Well, you see, there is a crack in the garage. The porch is also a little cracked, and the upper windows all flew out. The roof was damaged. But the husband's nephew came and fixed everything. Sadly, two shells flew right into his yard. They live across the street from us. He stood in the yard with a neighbor, but he said: “Let's disperse.”

The shells hit where they stood as soon as he entered the house. There was a giant funnel, but the two shells in the garden did not explode. They were just stuck. He is a soldier himself. He worked as a mechanic at the Hostomel airport and before he flew an airplane

— All people have the right to live and have their opinion. But the worst thing is that they lost the ability to analyze. That's what's frightening. Analyze and think a little. I have friends and relatives there. My husband has a sister in Moscow, and my son-in-law has a great-aunt in Tver. They don't believe us. It is not so much they don't believe; instead, they don't want to. But it's still our blood. Someone has friends there, godfathers. We are worried about them. You know, we are just scared for them.

For all the evil that they caused, they will answer before God. And those who understand would not have a normal life.

We're praying for our boys and girls who are out there. Thanks to them, we are alive. We wish them good health. It is very painful. If there were an opportunity, I would tear the enemies apart. I want them to be judged. They say: let him die (Putin). Yes! But I want him to feel our hatred. And not only him. After all, it's not just one person. There are many. I don't know; perhaps, they have black envy. How is it that you have the goods and we don't? Why? We'll take them from you! This black envy eats people. It is terrible, and it hurts because of our children who died. We feel pain for those who fight, those who work and stay, and the kids. 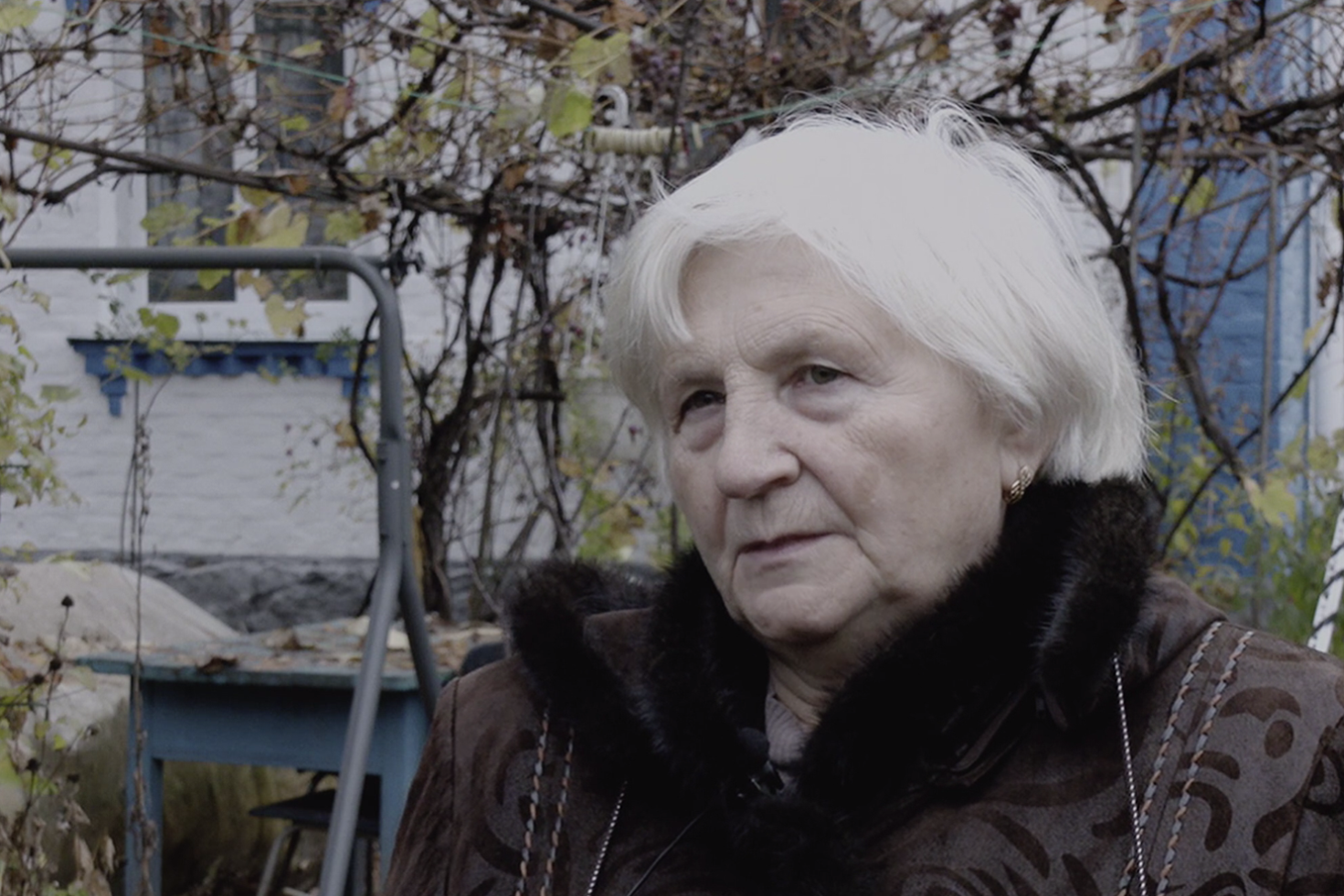 Yavorska Zoia, Borodianka
The article was prepared by the Kharkiv Human Rights Protection Group with the support of the Prague Civil Society Centre
Share this
x