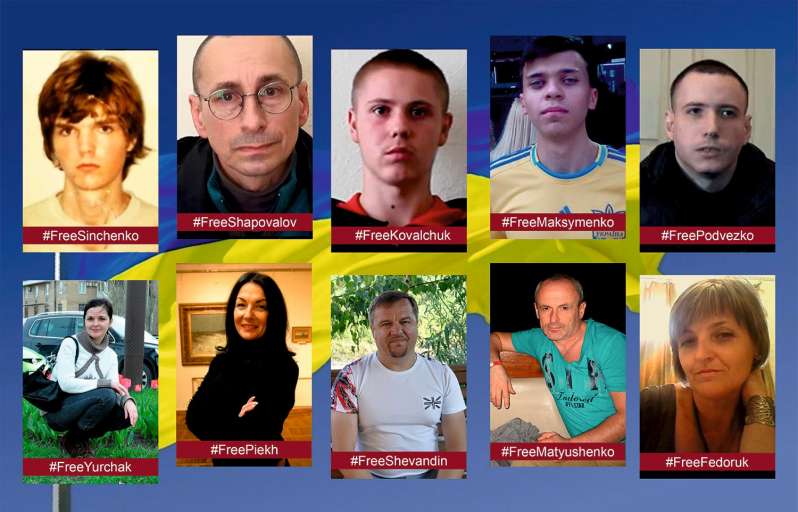 There are many ways of marking Ukraine’s Independence Day on 24 August, and the  Ukrainian Flag the day before. Except when you’re in the Russian proxy Donbas ‘republics’ where even posting a picture with the Ukrainian Flag can get you seized by the so-called ‘security service’, tortured and imprisoned for years.

Nor is this true only of the murderous first months of the war in 2014, when Horlivka Council deputy Volodymyr Rybak was abducted and savagely tortured to death for taking down the ‘flag’ of a Russian-controlled fake ‘republic’ and restoring the Ukrainian flag. Or when 16-year-old Stepan Chubenko was tortured and murdered because of the ribbons on his rucksack in the colours of the Ukrainian flag.

While it is possible that such methods have been applied against the hostages whose whereabouts remain unknown, there are also a huge number of hostages whom the militants almost certainly seized, tortured and are now imprisoning for their pro-Ukrainian position.  In the so-called ‘Donetsk and Luhansk people’s republics’ [DPR, LPR], such hostages are charged with ‘spying’ or, occasionally, planning sabotage for the Ukrainian Security Service [SBU].  Whether there were any grounds for such claims can be considered when they have been freed and are safely back on Ukrainian government-controlled territory.  What is clear is that there is no chance of a fair trial in pseudo-republics that Russia controls and finances, but has stopped short of recognizing. and Ukrainians are imprisoned at least in many cases for remaining true to their country.   These pseudo-republics are essentially criminal structures and it is possible that some of the over 200 hostages were seized to plunder their businesses, etc.

The following are just some of the people who did not conceal their pro-Ukrainian position and are playing a very high price.

Valery Matyushenko is one of at least two, but probably more, hostages from Kalmiuske (formerly Komsomolske), a city 50 kilometres south of Donetsk and Ilovaisk and only just over 30 kilometres from the border with Russia.  His wife, Tetyana Matyushenko, is convinced that much of the shelling they experienced in 2014 came from across the border.  It was after the battle near Ilovaisk (at the end of August 2014), she says “that Russian military entered the city with their technology” and the city subsequently became ‘closed’, almost certainly to conceal the truth about a war that Russia is trying to claim it has nothing to do with.

Matyushenko, who was 52 when seized on 15 July 2017, is a musician, but he and his wife also had a small business, which was seized in 2014 by Russian and pro-Russian militants who turned it into a military unit.  The family had never concealed their pro-Ukrainian views, and it is also likely that Matyushenko provided Ukraine with information about Russian military personnel based in Kalmiyske.

This would explain why he was held prisoner for 10 months at ‘Izolyatsia’, the former art centre turned into a secret prison where Russian and Russian-controlled militants torture with impunity.

He was ‘sentenced’ by a DPR pseudo-court on 28 March 2019 to 10 years for supposedly collaborating with he SBU.

The worst nightmare for family members is when nothing is known about a person’s whereabouts.  Shevandin is a very well-known sportsman who was seized by DPR militants over five years ago. The militants are refusing to give any information about his whereabouts, however the car he was driving is known to have been used by at least the Russian commander, ‘Zarya’, responsible for the seizure.

The family is from Debaltseve, but moved to government-controlled Sloviansk after the city was seized in early 2015. Unfortunately, Shevandin’s elderly mother remained behind and it was on a visit to her that he was seized.  Larisa Shevandin says that very few people knew of his plans, and she has to suspect that somebody turned out to be an informer as the DPR militants were clearly waiting for him when he arrived at a checkpoint in occupied Donbas on 1 May 2015.  He was seized by masked DPR men who put a bag over his head before taking him away, together with the car.  The family know only that Shevandin himself was taken on 3 May to Donetsk with the militants accusing him of spying for Ukraine.   His captors have refused to give any information about where he is imprisoned, and have not included him on the exchange list.

Olena Fedoruk is also from Kalmiuske.  Despite pro-Ukrainian views, Fedoruk refused to leave with her two adult daughters after the city was seized, because she needed to care for her bedridden mother.  It became impossible to continue running her flower shop, and she found work at the militants’ headquarters, where she was responsible for making inventories, for example, of chairs, tables and beds which were taken to local fighters and Russian military.

She was arrested on 25 July, shortly after two other people, including Serhiy Dubroviin, who was also sentenced on ’spying’ charges and is  imprisoned in the same Makiyivka prison as Valery Matyushenko.  On 16 August 2019, a ‘DPR court’ sentenced Fedoruk to 11 years’ imprisonment.  She and Sandulov had both been charged with ‘spying’ for Ukraine.

Fedoruk is one of at least three women evidently imprisoned because of their pro-Ukrainian position.

Olena Pyekh is 49 and epileptic, making her imprisonment for over two years of immense concern.   A senior researcher at the Horlivka Art Museum until 2014 and the war, she and her daughter, Isabella, left Donbas as soon as Russian and Russian-controlled militants seized Horlivka.  They settled in Odesa, however Pyekh’s elderly mother  remained in occupied Debaltseve, with her elder daughter.  Her mother suffered a stroke in 2015, and needed treatment and long-term rehabilitation for which Pyekh and her daughter organized the money.  It was during a visit to see her mother in August 2018 that she was seized by the so-called ‘DPR ministry of state security’.  It is known that she was subjected to beatings and torture (asphyxiation and electric ocks).  She was sentenced on 27 March 2020 to 13 years for ‘spying and treason’.  As Isabella Pyekh notes, her mother is the citizen of only one country – Ukraine, and it is only Ukraine, her motherland, that she could, but would not, betray.

Marina Yurchak is a 40-year-old environmental chemist, who has been held hostage in the Russian proxy ‘Donetsk people’s republic’ [DPR] since 9 November 2017.  It is now known that she was held at ‘Izolyatsia’ and doubtless tortured for almost a year, however at the time she simply disappeared and her parents had no idea what had happened to her.

Although the 15-year sentence received on 26 March 2020 was, as usual, for supposed ‘spying, it seems Yurchak was also accused of ‘insulting’ top militants, whose vehicles she refers to as ‘orc-mobiles’.  From back in 2014, Yurchak was active on Twitter, making no secret of her pro-Ukrainian views and writing honestly about what she saw.  She openly wrote, for example, about where the shelling was coming from and the direction in which military technology was being transported.

There are several other hostages who appear to have been seized because of pro-Ukrainian comments on Twitter.

Almost all that we know about him and about Yuri Shapovalov comes from videoed ‘confessions’.  The Russian-controlled militants have followed Russia’s FSB in producing such videos where men ‘confess’, sometimes to entirely preposterous ‘crimes’ which then prove different from the charges used to convict them.

Although the ‘sentence’ of 14 years is for the standard ‘spying for the SBU’, 31-year-old Podvezko appears to have been charged over alleged communications with a Twitter user whom both Russia and its proxy ‘republics’ do have cause to hate.  Necro Mancer @666_mancer is one of the citizen journalists who has provided invaluable information about Russian military and pro-Russian losses in occupied Donbas; military movements, etc.   He seemingly lives in Donetsk and began documenting the military movements and military losses that Russia has tried very hard to conceal from the events of April 2014.  It was then that, having failed to stir up local uprisings, Russia sent in ‘former’ FSB officer Igor Girkin and around 50 heavily armed men who seized control of Sloviansk in the Donetsk oblast on 12 April.

In their ‘prosecution’ of Podvezko, the DPR militants claim that Necro Mancer works for the SBU and that Podvezko passed him information.

The 55-year-old neuropathologist was ‘sentenced’ in DPR in April 2020 to 13 years’ maximum security imprisonment for posts on Twitter which were claimed to “destabilize the situation” in the unrecognized ‘republic’.  Shapovalov has been imprisoned for over two years, and was for at least some of this time held and tortured in the Izolyatsia secret prison.  It was only from the testimony of two  journalists released in the December exchange, Stanislav Aseyev and Oleh Halaziuk, that his whereabouts were known after the original militant report and videoed ‘confession’ in March 2018 (when he had already been in captivity for some time.  Although Shapovalov’s Twitter account was clearly hijacked by the militants following his seizure, the tweets from before January 2018 can still be seen here at Залишенець Донецький @relictDon.  They show a person with clear pro-Ukrainian views and a deep antagonism to ‘Russian world’ ideology and the devastating impact this has had on Donetsk.

At 20, Bohdan is the youngest of the known hostages.  The so-called ‘DPR ministry of state security’ arrived at the flat Maksymenko shares with his mother on 10 April  2020, and took both the young man and his computer away.  He was almost certainly targeted for the passionately pro-Ukrainian views he expresses on social media.  There are particular concerns in his case, as Bohdan has a congenital heart defect.

Bohdan is only 21, yet has spent four years in DPR militant captivity.  He and several other teenagers were seized in September 2016 and forced to give videoed ‘confessions’ of having carried out tasks for Ukraine’s SBU [Security Service].  Bohdan was just 17 at the time, with the youngest lads – 15.  At the time of the last major exchange of prisoners in December 2019, the militants offered to ‘pardon’ the young men, but only on condition that they ‘repented’ and agreed not to leave occupied Donbas.  Kovalchuk, however, refused, saying that he wanted to go to government-controlled Ukraine.  Probably as punishment for this, he was not included in the last, April, exchange, and is spending a fourth year imprisoned, with the 10-year ‘sentence’ still standing.

There is real concern as to 29-year-old Sinchenko’s safety after news of his capture by the DPR militants on 29 June 2020.  The young man, who was originally from Makiyivka, but was living in the Kherson oblast, was first taken prisoner when he returned to occupied Donbas to reinstate medical documents. The militants accused him of blowing up cigarette kiosks, and he was savagely tortured, including with the use of electric shocks, asphyxiation and being suspended for several hours by handcuffs.

He was released in the exchange of hostages and POWs on 27 December 2017, but later returned to Donbas, seemingly to continue partisan activities against the Russian proxy ‘republic’.  He was seized again and savagely beaten in October 2019, with the so-called ‘DPR ministry of state security’ accusing him of involvement in the blowing up of a Donetsk radio tower in protest at the widespread use of torture in the DPR’s illegal prisoners.  There were initially fears that the militant claims that Sinchenko had escaped in May 2020 could mean that they had tortured him to death and were trying to conceal it.  In fact, it appears that he really did escape, but was unfortunately recaptured, and is undoubtedly in danger.

These are just some of the hostages we are aware of and probably a very small percentage of the real number.  It is Russia ultimately that makes any decisions about the release of Ukrainian hostages, and all help in lobbying politicians to put pressure on Russia can help to free these and other Ukrainians.  Pressure, it should be said, can also usefully be put on the Ukrainian government since the last exchange of prisoners, in April 2020, was frustratingly inadequate and felt essentially like a publicity stunt.