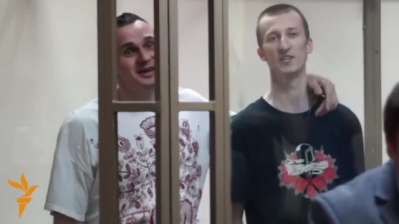 What do you do when a Russian court reads out monstrous sentences?  Oleg Sentsov and Oleksandr Kolchenko sang the Ukrainian national anthem

Moscow’s calculation with its politically motivated prosecutions of Ukrainians in Crimea or held illegally in Russia is probably that the Russian population can be fed lies through state-controlled media, Ukraine and western countries will express indignation, but then lose interest.  The reports should stop because ‘everybody knows’ and it gets ‘boring’ saying the same thing.

At least 21 Ukrainian nationals are imprisoned, and it is for us to prove Moscow wrong.

We can WRITE to them (see below) – even just New Year greetings will tell them they are not forgotten, and the Russian authorities that they are under scrutiny.

We can INFORM people about the case – encourage politicians to demand their release, journalists to write about them.

Year of Courage, Year of Lies 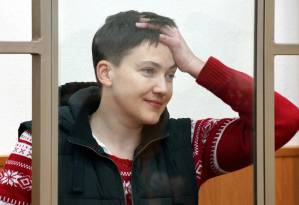 In fact, Russia’s first miscalculation was in the people it dared to imprison.

It is difficult to fathom what the Kremlin hoped to achieve by abducting Nadiya Savchenko, a Ukrainian military pilot, known to have been captured by Kremlin-backed militants in eastern Ukraine.

Savchenko was clearly not a person who could be broken and the charges were manifestly absurd.

The highly politicized Russian Investigative Committee never even managed to come up with a coherent story.  Its claim that Savchenko was ‘released’ by her militant captors was even denied on Russian state television by the militant leader at the time.

Nadiya Savchenko has been on hunger strike since Dec 18, and the inevitable ‘conviction’ in his imitation of a trial is unlikely before February.

Russia’s FSB [security service] got things as spectacularly wrong with the four opponents of Russia’s occupation of Crimea it arrested in May 2014 for a ‘terrorist plot’ show trial.

Two of the four men – renowned Ukrainian filmmaker Oleg Sentsov and civic activist Oleksandr Kolchenko – did not break under torture and have consistently – and contemptuously – dismissed all charges, and Sentsov has given a detailed account of the torture he was subjected to.

They received longer sentences for their courage – Sentsov was sentenced to 20 years, Kolchenko – to 10, but the world heard their words of defiance, heard them sing the Ukrainian national anthem as the monstrous sentences were being read out.

The trial had also demonstrated that there was not a scrap of evidence against any of the men, including Gennady Afanasyev and Oleksy Chirniy who had, however, ‘confessed’ and were already serving shorter (7) year sentences for confessed, yet non-existent ‘terrorism’.

Most crucially, the sentences were passed after Gennady Afanasyev demonstrated enormous courage when he was brought to the trial from a Russian prison.  He had been ordered to refuse to testify in court to avoid cross-examination, as had Chirniy the day before.   Afanasyev, however, told the court that he did not know the men and stated that all testimony had been tortured out of him.

Afanasyev is now in danger, has been sent to a prison in the far north of Russia and is getting very harsh treatment.  Yet that moment should certainly be remembered and is one for which he can be proud.   Both Sentsov and Kolchenko applauded and Sentsov called out: “Glory to Ukraine!”  “Glory to the heroes!” - Afanasyev answered.

Sentsov managed to also call out “Freedom for Gennady Afanasyev!” before being silenced by the judge.

The world saw Sentsov sentenced to 20 years for absolutely nothing even after Afanasyev’s retraction.

Russia’s Investigative Committee was forced to retract ‘war crimes’ charges against Serhiy Litvinov, a cowherd from the Luhansk oblast, after Ukrainian activists and his lawyer succeeded in demonstrating a fundamental problem in the lurid ‘confessions’ which had clearly been tortured out of him.  The investigators had simply invented names and addresses for the multiple murders and rapes the man had ‘confessed’ to in order to stop the torture.  This could be proven.

The same applies to the ‘confessions’ tortured out of two Ukrainians now on trial in Chechnya – Mykola Karpyuk and Stanislav Klykh.  The renowned Memorial Human Rights Centre has analysed the charges against the men, related to the first war in Chechnya, in 1994-95 and delivered four blistering assessments.  The investigators had not even bothered to find out how real soldiers really did die, nor details about the events, and everything suggests that the ‘confessions’ were tortured out of the men.

The brutality, even where physical torture, is not involved can defy belief.  73-year-year-old Ukrainian pensioner Yury Soloshenko was sentenced to 6 years maximum security prison on charges of ‘spying’ that were simply impossible.   He had been prevented from seeing the lawyer of his choice and, without proper defence, was clearly tricked into ‘confessing’ on the assurance that he would be sent home.  Instead, he has been sent to a harsh regime prison camp – a death sentence for a man in his state of health.  There was total secrecy about his trial, as well as that of  Valentin Vyhivsky, recently sentenced to 11 years for equally implausible spying.

Oleksandr Kostenko, a Crimean Maidan activist, was also tortured and his retraction of ‘confessions’ and complaint about the torture were also ignored.  His case, like some of those in Crimea (covered separately), is of particularly surreal lawlessness since he was ‘convicted’ of an unprovable offence which was alleged to have taken place in Kyiv before Russia invaded Crimea.  None of this stopped a court in Russian-occupied Crimea from sentencing him to almost 4 years.

All of the above are Ukrainian nationals who are being held illegally in Russia, with the latter demonstrating particular contempt for the law by claiming that the men from Crimea ‘automatically’ became Russian.

Please write postcards or letters – we know from their families how much they appreciate them.  The #Letmypeoplego Campaign is currently running a Holiday Marathon (please see details here).

Or use the suggestions below.

If you can write in Russian, please do, but avoid any discussion of the case or politics.  If not, the following would be fine  (cut and paste the words in Russian, and the same below with the addresses)

Oleg Sentsov and Oleksandr Kolchenko are currently in a transit remand prison, and it is not known where they will be sent.  For them, and Oleksy Chirniy, it is better at present to cut and paste the names as given below (the year of birth after their name is required by the prison service), but send letters in email form or attachments to post.rozuznik[at]gmail.com   They will deal with writing the envelope and sending it on.