Documenting war crimes in Ukraine.
The Tribunal for Putin (T4P) global initiative was set up in response to the all-out war launched by Russia against Ukraine in February 2022.
• Topics / Elections 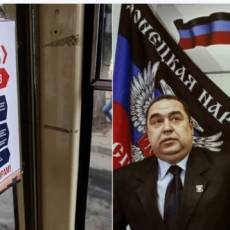 The self-styled ‘Donetsk and Luhansk people’s republics’ held ‘primaries’ on Oct 2, claiming them to be preparation for the local elections demanded by the Minsk Agreement. The event was effusively praised by at least 33 ‘observers’, some of them already known for their far-right or extreme left views and unwavering pro-Kremlin position

According to one estimate, " the scope of the falsification in favor of United Russia in these elections amounted to approximately 12 million votes"

Most Crimean Tatars appear to have boycotted the elections which Russia illegally held in occupied Crimea. How many other Ukrainians also refused to take part is as yet unclear, but it seems likely that despite threats and coercion, the turnout was low. Judging by previous experience since Russia’s invasion of Crimea, the boycott could lead to an escalation in repression.

More reports are emerging of Crimean public sector workers being threatened with dismissal if they don’t turn up at the polling booths on Sept. 18. Russia is illegally holding its parliamentary elections in occupied Crimea and is typically using coercion to gain turnout amid calls to boycott the event.

Crimean Tatar Mejlis leader Refat Chubarov has addressed all Crimeans calling on them to boycott the Russian parliamentary elections which Russia is insisting on holding in annexed Crimea. His appeal coincides with a Ukrainian parliamentary resolution asking the international community to join Ukraine in not recognizing the elections in Crimea.

A “delegation of foreign observers from Finland and Serbia” has visited Donetsk as part of an elaborate, if farcical, attempt by the Kremlin-backed militants to bypass the commitments agreed in Minsk for holding local elections

Ukraine’s Central Election Commission has complied with a highly contentious move by the bloc of Petro Poroshenko [BPP] and has stripped two Ukrainian MPs of their mandate. The move is especially chilling as one of the MPs Yehor Firsov had left the faction in protest at what he called corruption among the leadership

A key Kremlin-backed leader has stated that he has no intention of implementing the Minsk Agreement and holding elections according to Ukrainian legislation. Western irritation with Ukraine’s supposed failure to come up with a ‘special’ law to enable such elections is therefore unfounded.

President Poroshenko has ignored calls to veto a bill which violates electoral rights and could be used to enable parties to ignore voters’ choice, even that expressed in 2014, and bring in obedient MPs, or those who pay most

Unless the law is revoked, parties will be able to change the order of candidates on the candidate lists after votes have already been cast.

So will anybody answer for the non-election fiasco in Mariupol?

The head of the OPORA election watchdog warns that the elections sabotaged in Mariupol and Krasnoarmiysk on Sunday cannot be repeated before the New Year. Who was to blame should be the subject of a criminal investigation.

Why must Ukrainians fight for their right to vote?

With the local elections due in October, speed is critical in passing one of three bills now tabled in parliament to rectify the current situation which prevents people forced to leave their homes in Crimea or Donbas from voting.

An MP and sponsor of the populist Radical Party which came to power promising to radically combat corruption has concealed ownership of a flat in the centre of Paris worth well over a million EUR. If this is an embarrassment, so too should be the news of the Radical Party’s strange electoral bedfellows in the Kherson oblast.

The West should not legitimize illegitimate, Kremlin-backed elections in Donbas

Militant leaders have refused to recognize Ukraine’s Law on Local Elections, and have now banned any Ukrainian media from covering the ‘elections’ they have scheduled in breach of Ukrainian law. They have also imposed restrictions enabling them to prevent any real electoral choice.

OPORA sees the main problem as being the failure of the authorities to fulfil their obligation and prevent infringements.

Election watchdogs OPORA and the Committee of Voters of Ukraine [CVU] have reported fake journalists, titushki, or paid thugs at polling stations, and other irregularities in the mid-term election at the Chernihiv No. 205 single mandate electoral district

Displaced by Russian aggression, now stripped of right to vote

The Committee of Voters of Ukraine [CVU] and OPORA report that scandal continues over Donetsk oblast electoral district No. 59, where abnormal turnout and ballot stuffing were reported on Election Day

Peace, lustration, economic prosperity – what the public voted for