High-ranking Russian officials openly incite to genocide against Ukraine International experts issue stark warning of Russian genocide against UkraineGrave of more tortured victims of Russian invaders found in Kyiv oblast Raped, shot and thrown in a mass grave by the Russian invaders who turned Bucha into hell Russian invaders mine children’s playgrounds leaving trail of horrific war crimes Mass graves of the Ukrainian civilians Russia claims it is not killingTerror and abductions as Russia tries to break Ukrainian resistance in Kherson and other occupied citiesUkrainian journalist Oleh Baturin feared abducted by Russian invaders in Kherson oblast Mayor of Melitopol Ivan Fedorov abducted after refusing to collaborate with the Russian invaders Russian priest arrested and prosecuted for sermon opposing Russia’s war against Ukraine Russia effectively admits it deliberately bombed the maternity hospital in Mariupol that killed three patients, including a childRussia brings grotesque propaganda to Berdiansk after Ukrainian journalists refuse to collaborate Russian invaders murder Ukrainian volunteers Impassioned appeal from Ukrainian Muslim leader in face of Russia’s war to destroy Ukraine Russia is forcing Ukrainians from occupied Crimea and Donbas to fight in its invasion of Ukraine Children among the dead after Russian invaders opened fire on fleeing civilians Russia installs its propaganda TV after seizing Kherson and imposes 15-year sentences for reporting its invasion of UkraineUkrainian survivors of the Holocaust demand Putin and Russia get out of Ukraine Russia continues its carnage, flouting binding order from ECHR to stop bombing civilians in UkraineBabyn Yar bombed by Russia, 80 years after Nazi Massacre of Ukrainian Jews
• Topics / War crimes 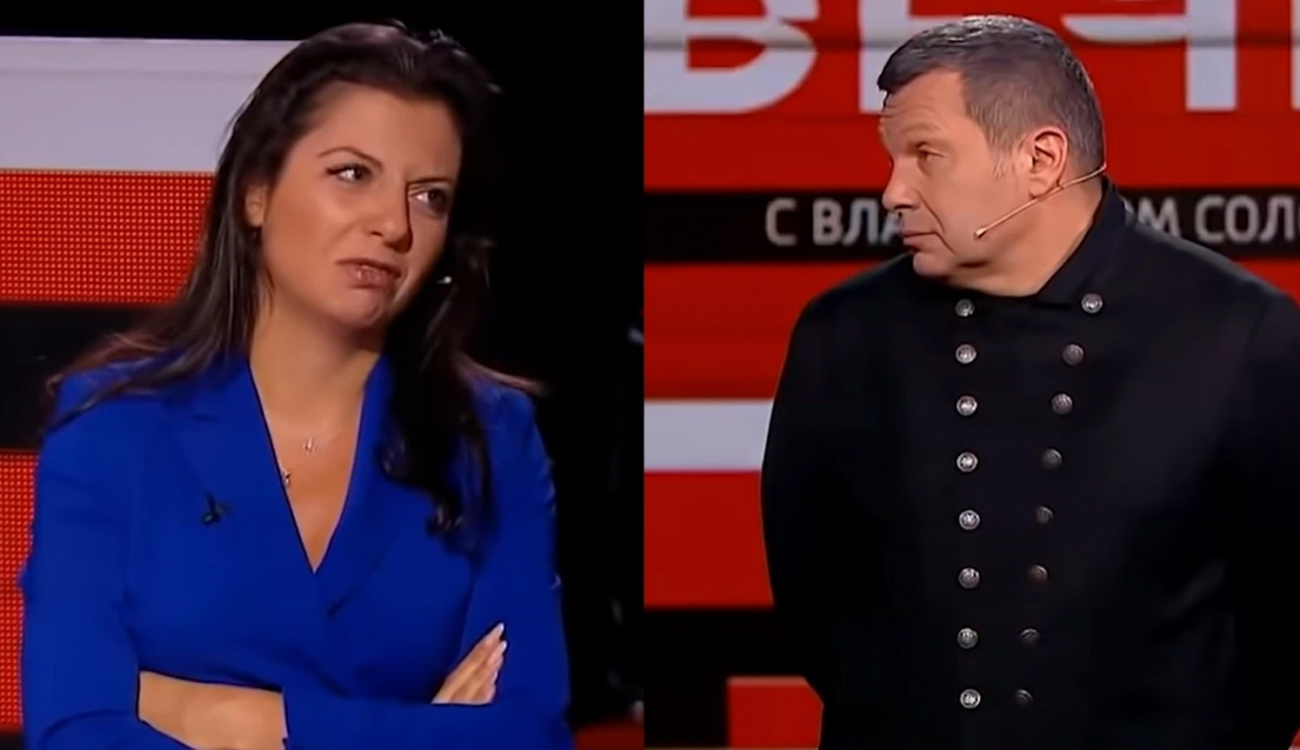 An important study carried out for Verstka Media set out to determine whether Russian state media are guilty of direct and public incitement to genocide in their coverage of events linked with Russia’s war against Ukraine.  The resounding ‘yes’ provided by media researcher Nikolai Chikishev is not new, but this is the first such Russian investigation and provides detailed and compelling evidence of attempts to dehumanize Ukrainians and deny Ukraine’s very existence as a sovereign state.  In a Facebook post about the study, Chikishev wrote that “the direct link between Russian propaganda and war crimes should be obvious and become the subject of legal analysis.  This study helps to understand where the specific guilt of propagandists lies.”

The study has concentrated on the first six months after Russia’s full-scale invasion on 24 February 2022 when, Chikishev notes, the propaganda discourse changed noticeably. It is, however, worth pointing out that the essential features of this discourse and the same dehumanizing hate speech were also evident in 2014, after Russia’s invasion of Crimea and military aggression in Donbas.  This is important to remember as former employees of those state media have disclosed the degree to which the very terms used, the arguments, etc. were agreed between Kremlin officials and the channels’ management.  Then too it was evident that the same lies and manipulation, for example, about Donbas, about the tragic fire in Odesa on 2 May 2014, and the MH17 disaster, were being pedalled by top Russian officials and by the state media.  The latter also modified their presentation, for example, by removing words like ‘junta’ and ‘fascists’ or avoiding certain subjects if Moscow was attempting a more conciliatory approach before an important meeting, or decision on sanctions.  It is quite possible that the Kremlin is coordinating such virulent hate propaganda now.  In fact, even without direct instructions, the chief propagandists in the state media hear the messages pushed by Russian leader Vladimir Putin, the deputy head of the Council of the Federation (and one-time nominal ‘President’) Dmitry Medvedev and others and doubtless understand that this reflects the narrative expected from them.

The scale of aggression and the clear genocidal elements in Russia’s war against Ukraine did become much more evident after 24 February 2022.  It is specifically the role that propaganda media have played in this, and whether this constitutes incitement to genocide that Nikolai Chikishev and Verstka Media decided to investigate,

The Convention on the Prevention and Punishment of the Crime of Genocide [the Convention] punishes not only for direct genocide but for “direct and public incitement to commit genocide” (Article III).  Such incitement shall be punishable, whether or not genocide follows.

As well as lodging an application with the UN’s International Court of Justice on 28 February 2022 asserting Russia’s violation of the Convention, Ukraine has repeatedly called for accountability of those most implicated in Russia’s information warfare.

The role of the Russian state media in incitement to genocide was described in some detail by the group of 30 recognized human rights lawyers and scholars from all over the world who warned back in May 2022 of a serious risk of Russian genocide in Ukraine and of the legal responsibility of all countries to prevent this.

The Verstka report also notes that the Institute for the Study of War  has reported “openly genocidal rhetoric” from Russian politicians and that “This rhetoric is openly exterminatory and dehumanizing and calls for the conduct of a genocidal war against the Ukrainian state and its people, which notably has pervaded discourse in the highest levels of the Russian political mainstream”.

For his study, Chikishev chose both state media and one prominent public official, namely Dmitry Medvedev who, as reported earlier, has fairly openly incited to genocide on his Telegram channel.  The state media sources are: Russia Today (or RT); RIA Novosti; the talk show ‘Time will tell’; ’60 Minutes’ with Olga Skabeyeva and Yevgeny Popov; and ‘Evening with Vladimir Solovyov’.  He also examined posts on Telegram channels.

Chikishev explains his method as critical discourse analysis in which he examines how the participants in this discourse understand Russia and Ukraine; how they speak of and differentiate between ‘us’ and ‘the others’, and how they attempt to manipulate people’s opinions.  The study found that all these sources tried to persuade their audience that “Ukraine is not a sovereign and independent state”; that “Ukrainians are not a separate formed nation” and that “the Ukrainian government is not legitimate”.  The full report is important also in providing transcripts of the entire dialogues which Russian audiences are hearing.  This is while, for many of them, other sources of information have been blocked, and when those who do tell the truth about the atrocities committed in Bucha, Izium and other Ukrainian cities can end up imprisoned for eight years or more (like Alexei Gorinov and Ilya Yashin).

“The dehumanization, the accusations of crimes, encouragement of violation prompt the audience to adopt a particular position in the conflict”, the report concludes.

The call in October from Russia Today presenter Anton Krasovsky to ‘burn’ and ‘drown’ children was so appalling that RT was forced to distance itself and dismiss him.  In fact, Krasovsky had been preparing the ground for belligerent warmongering hate speech even before the full-scale invasion and the rest of a totally shocking and genocidal tirade went largely unnoticed.

The report does, in fact, point out that Krasovsky’s call to kill children was the climax of months during which viewers had become accustomed to aggressive rhetoric on state and pro-Kremlin media.  Ukrainians were constantly referred to as ‘Nazis’, etc, with speakers talking about ‘destroying’ them; ‘driving them out’ or about their supposed ‘deSatanization”.

The report cites a brief document listing “the 5 ‘d’s’ of incitement”, namely dehumanization; demonization; delegitimization;  disinformation; denial (negating historical facts or denying past [and recent!] atrocities); threats and glorification of terror).  All of these have been part of Russia’s narrative about Ukraine and the reasons for Russian aggression since 2014, and have escalated since February 2022.

He provides example after example of Russia as ‘us’ being presented as the victim, against those ‘others’ supposedly guilty of ‘aggression’, of ‘the ‘others’ being out to destroy ‘us’; etc.  ‘We’ on the talk shows are always in the right.  If the entirely warranted and well-documented accusations of atrocities are mentioned at all, they are treated as unable to be believed, as ‘provocation’, etc.

RIA Novosti and RT are, supposedly, news channels, however there is overt manipulation there too.  When Russia bombed a shopping centre in Kremenchuk, for example, killing many civilians, these Russian sources avoided any words associated with violence, speaking only of ‘a fire’ and claiming (falsely) that the building had been empty.

Whereas the three talk shows studied may show slight variations in the image pushed of Russia (‘victim’; ‘conqueror’, etc.), all are unanimous in trying to prove that the Ukrainian state and Ukrainian people do not exist and that the present Kyiv government is illegitimate. The presenters and their guests constantly try to dehumanize the Ukrainian military and describe them as ‘Nazis’; ‘maniacs’; ‘beasts’, etc.  Many of the quotes cited accuse the Ukrainian Armed Forces of precisely those crimes that Russia is committing (the deliberate targeting and destruction of infrastructure; the killing of civilians and others).

The similarities that Chikishev finds in presentation would seem to suggest that the coordination reported by former employees in 2014 is continuing.  He notes that the same conclusions and positions are voiced on all three talk shows, regardless of the different information pretexts.  The same strategy is also seen, with the presenter in each of the talk shows acting as censor and controlling what the speakers say.  These speakers in general supplement one another and form a single, united point of view, with the official state position never placed in doubt.

This includes the defence ministry’s repeated claim that it is only hitting military targets.  The media studied continue to claim that there have been no civilian casualties even where, Chikishev notes, this contradicts the logic of the narrative.

The conclusion refers to the above-mentioned report in May, published by the New Lines Institute for Strategy and Policy and the Raoul Wallenberg Centre for Human Rights.  In order to determine whether there was incitement to genocide, Verstka probed the elements which the earlier report had identified.  These are:

Denial of the existence of a Ukrainian identity;

“Accusation in a Mirror. “Accusation in a mirror” is a powerful, historically recurring form of incitement to genocide. A perpetrator accuses the targeted group of planning, or having committed, atrocities like those the speaker envisions against them, framing the putative victims as an existential threat makes violence against them appear defensive and necessary”;

Construction of Ukrainians as an Existential Threat;

Conditioning the Russian Audience to Commit or Condone Atrocities.

The Verstka report finds elements of direct and public incitement to genocide. Those responsible include the participants in such discourse; official representatives of the Russian state; employees of the state propaganda media and those ‘experts’ who collaborate with these media outlets.

Rather more controversially, the report suggests that this ideological discourse dominates in the Russian public realm because the conditions for this have been artificially created by the total blocking of independent media and wide-scale repression against them. It asserts that were such barriers to be withdrawn, the narrative would collapse and become fringe views.

Although the current regime has been systematically limiting freedom of speech and of peaceful protest for well over a decade, there was scope for individuals and independent media to at least write about their opposition to Russia’s invasion of Crimea and effective occupation of Donbas from 2014 until the beginning of March 2022.  Those who did so were, unfortunately, in a very small minority.